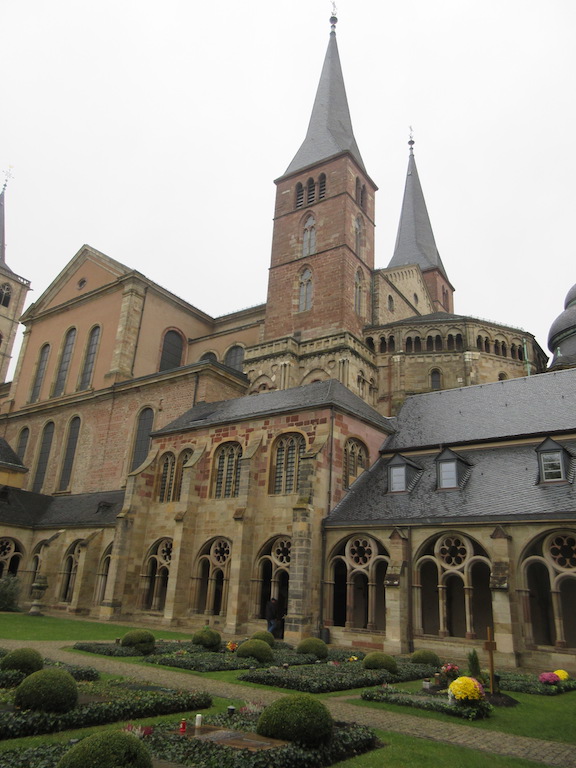 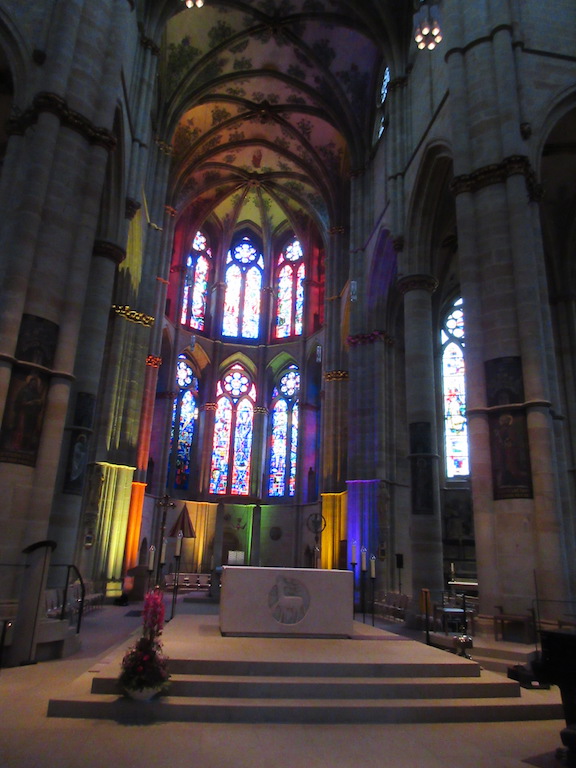 Trier – Church of Our Lady 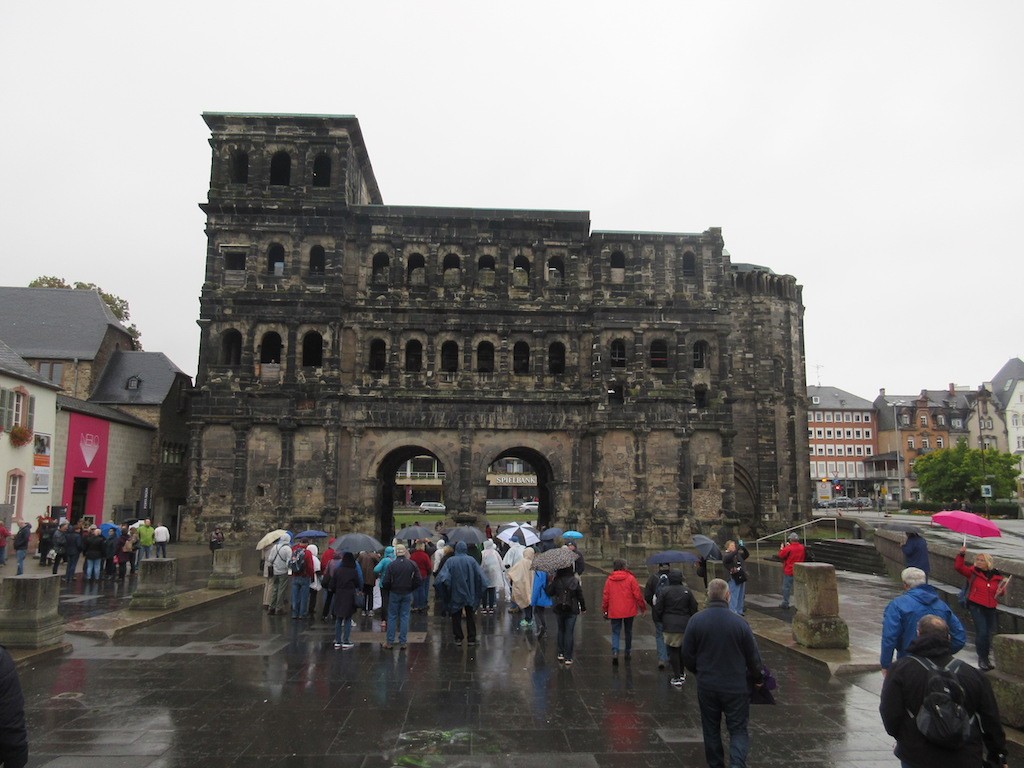 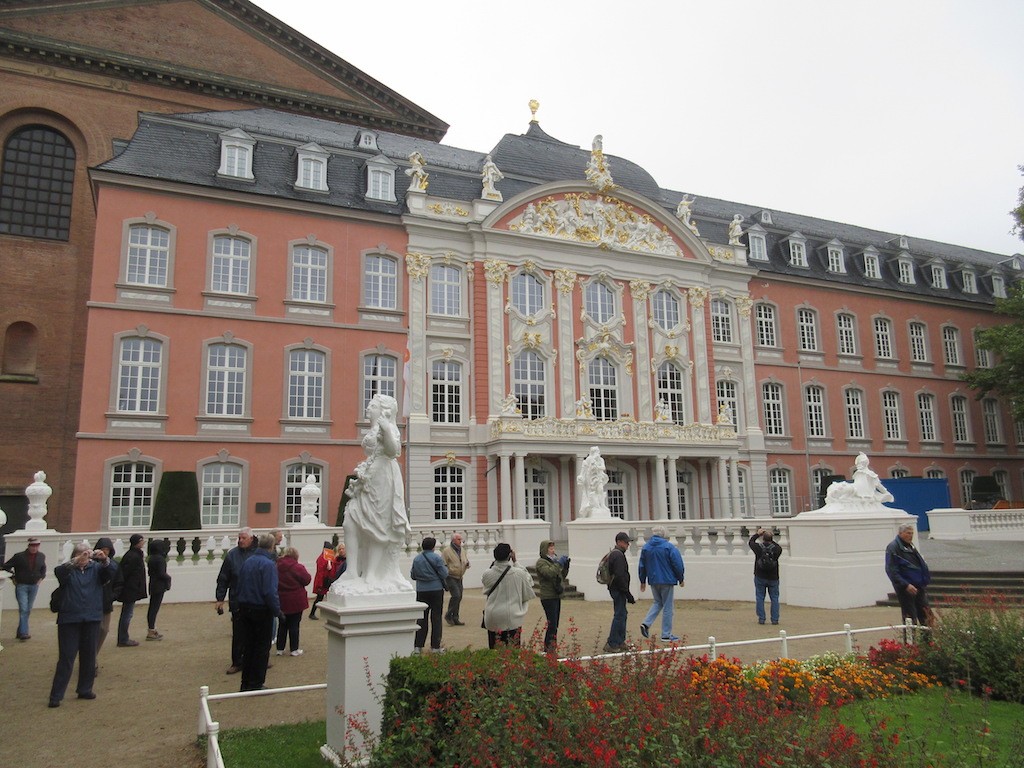 On this day we visited the town of Trier, Germany, with a population of about 100,000 people and is one of the oldest cities in Germany, founded by the Romans before the time of Christ. We stopped to see the Porta Nigra, the best preserved Roman city gate north of the Alps. We drove by the Barbara Baths, one of three sets of ruins from Roman Baths around the city. These baths were built in the second century and had extensive furnaces, pools, sewer systems and a heating system.

We visited the remains of an old Roman amphitheater where gladiators fought other men and exotic animals from tigers to elephants. Many of the fighters were slaves who were trying to improve their place in society if they could win several battles, unfortunately many did not survive the battle.

We saw a large simple church that was originally built by the Romans but later incorporated into a huge palace and later restored to a church. The church today has the exposed bricks and mortar but all of the ornate marble and painted stucco exterior are gone. Attached to the rear of the church is a small portion of the palace and a classical styled garden maintained by the city.

There is also an amazing Roman Bridge built in the second century to span the Moselle River and is still used to cross the river today. Our next stop was the Liebfrauenkirche or Church of Our Lady, built in the Gothic style, although the stained glass windows and the altar were quite modern in style and the altar was in the center of the church. Next to that church was another expansive church called the High Cathedral of St. Peter. This cathedral is one of the oldest cathedrals in the country and the largest in Trier. Portions of the church date back to the fourth century and it has been added onto and altered ever since. Outside the cathedral is a peaceful garden and cemetery courtyard. Below the main sanctuary is another chapel and crypt.

For lunch we visited the Weingut Georg Fritz von Nell, a wine estate that has been in the same family for more than 200 years. Here we enjoyed a four course lunch with wine soup, salads, pork steak that had been marinated for two days, scalloped potatoes with cheese, pane-cotta and of course, tasted six of their delicious wines. Kent enjoyed the red grape juice.

By late afternoon we re-boarded the river boat in the town of Zell and headed for Boppard on the Rhine River. After dinner we participated in the evening’s entertainment game called the Liar’s Club. Three members of the crew each told a story about the meaning of a particularly obscure word like Fullfart. The audience would then have to decide who was telling the truth. The table or team that had the most correct answers won a bottle of champagne.