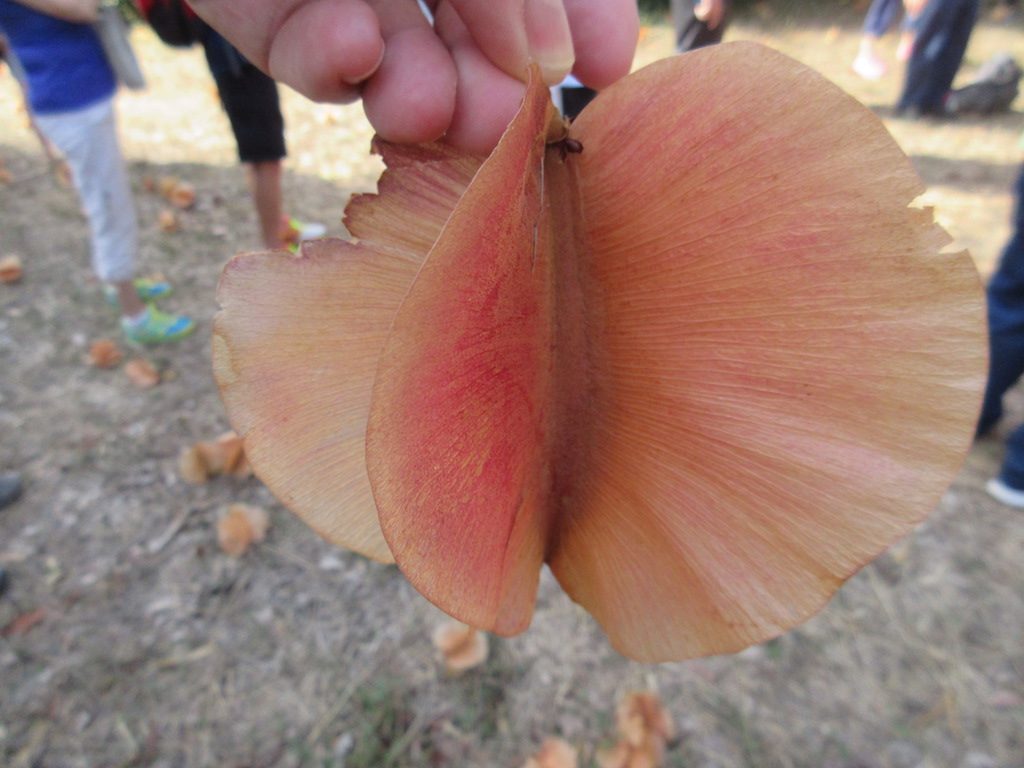 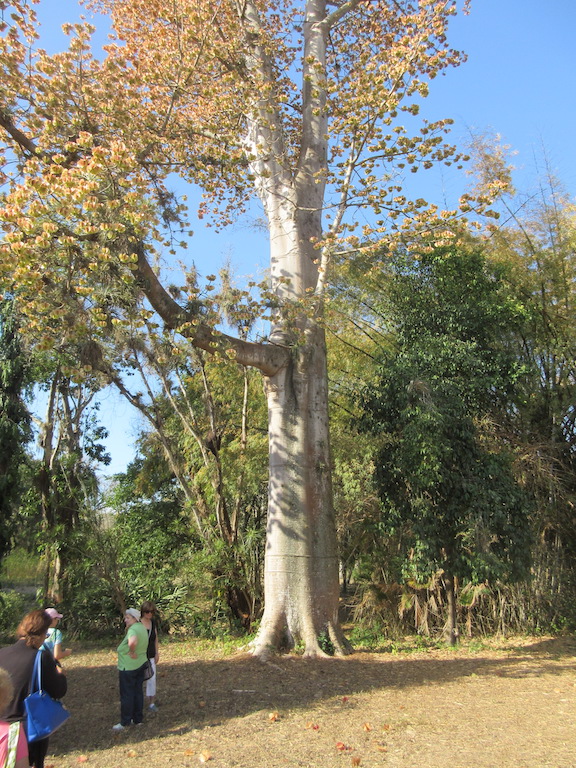 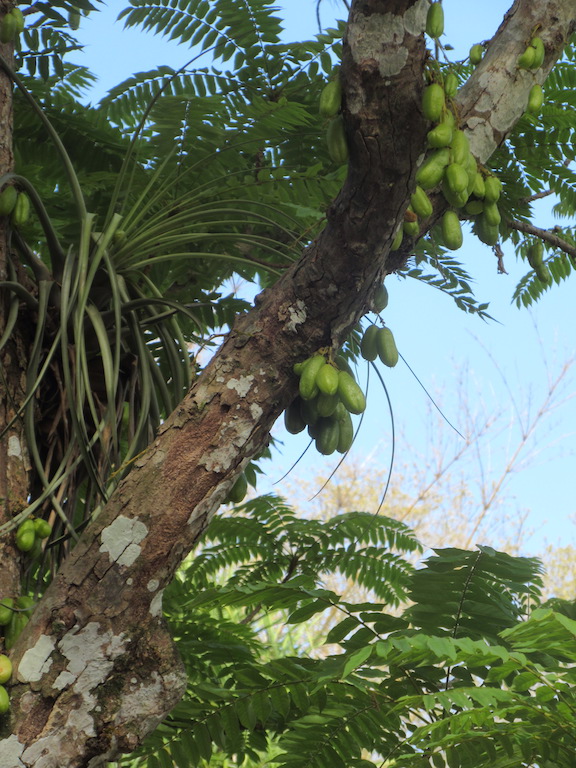 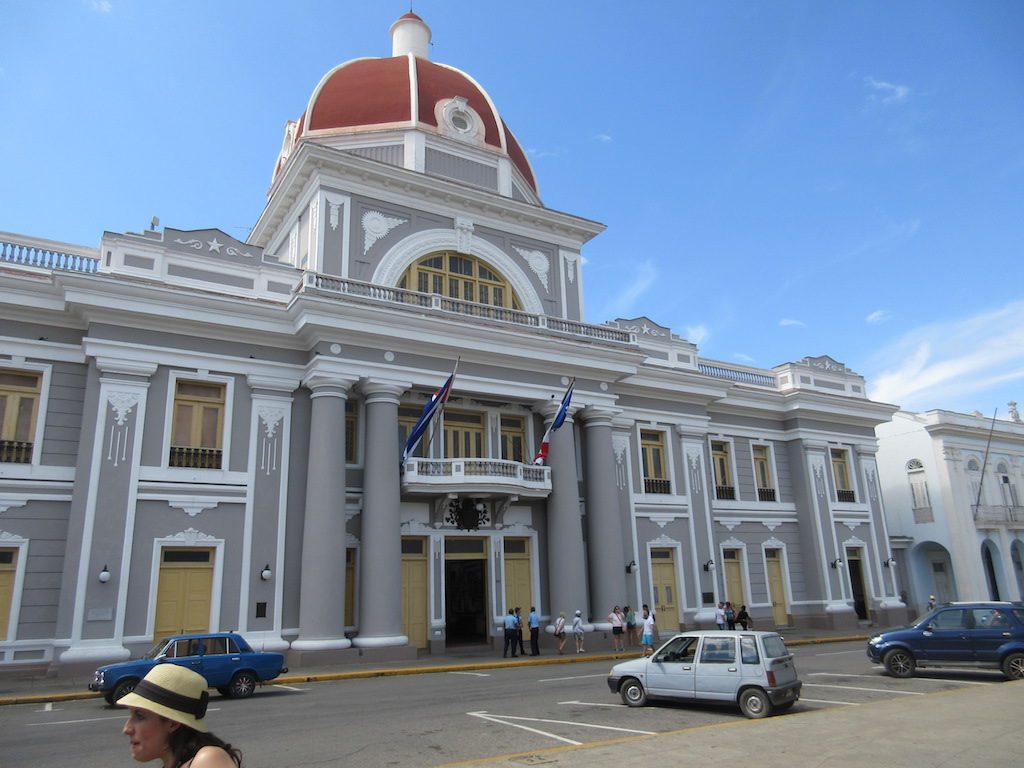 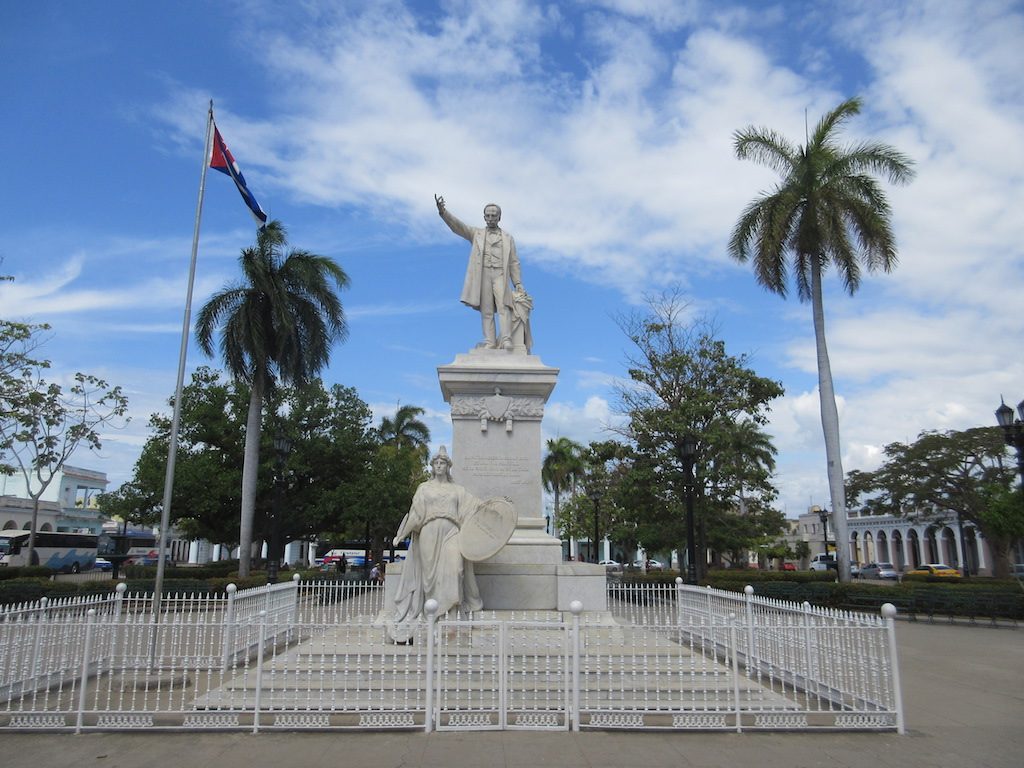 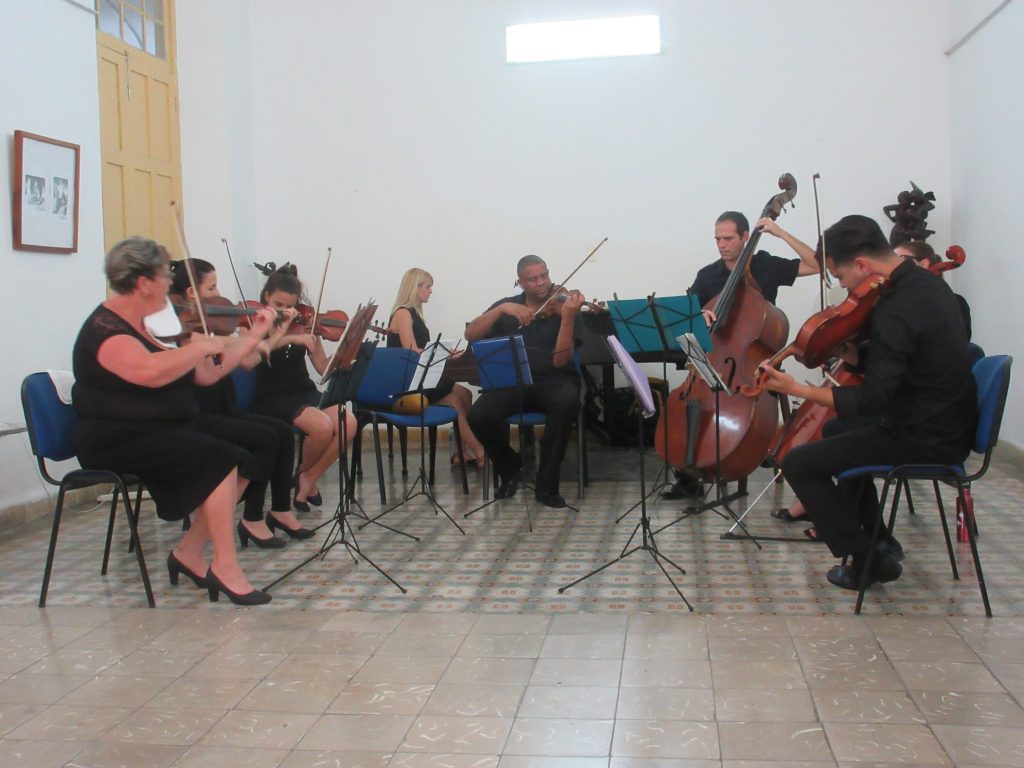 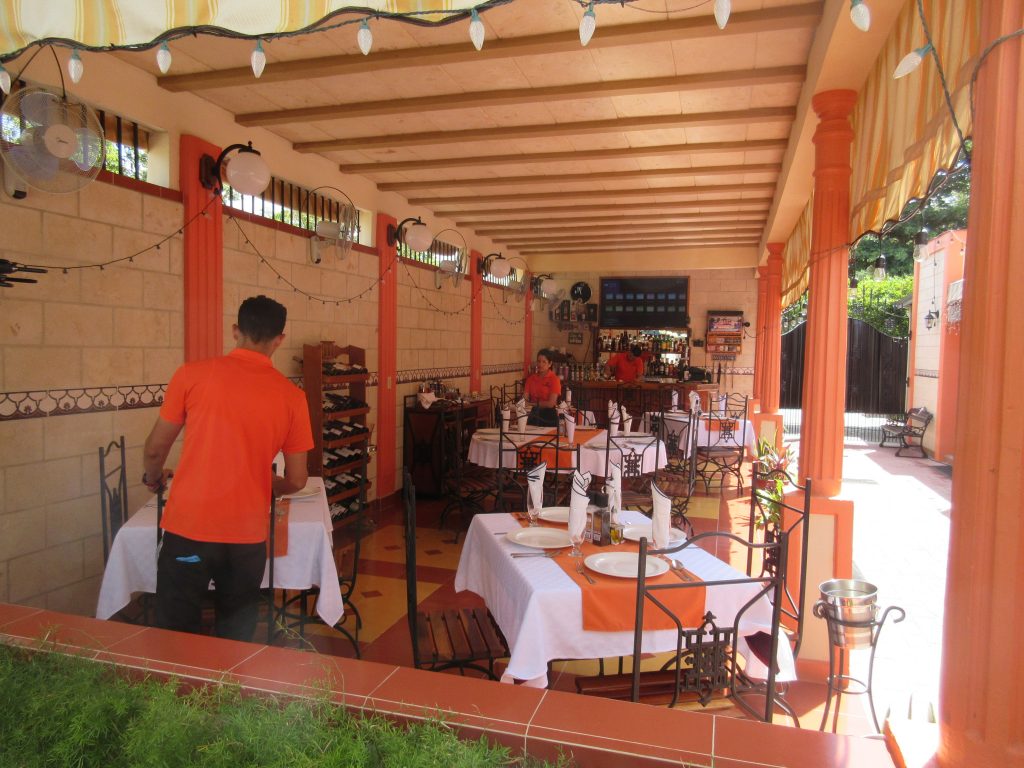 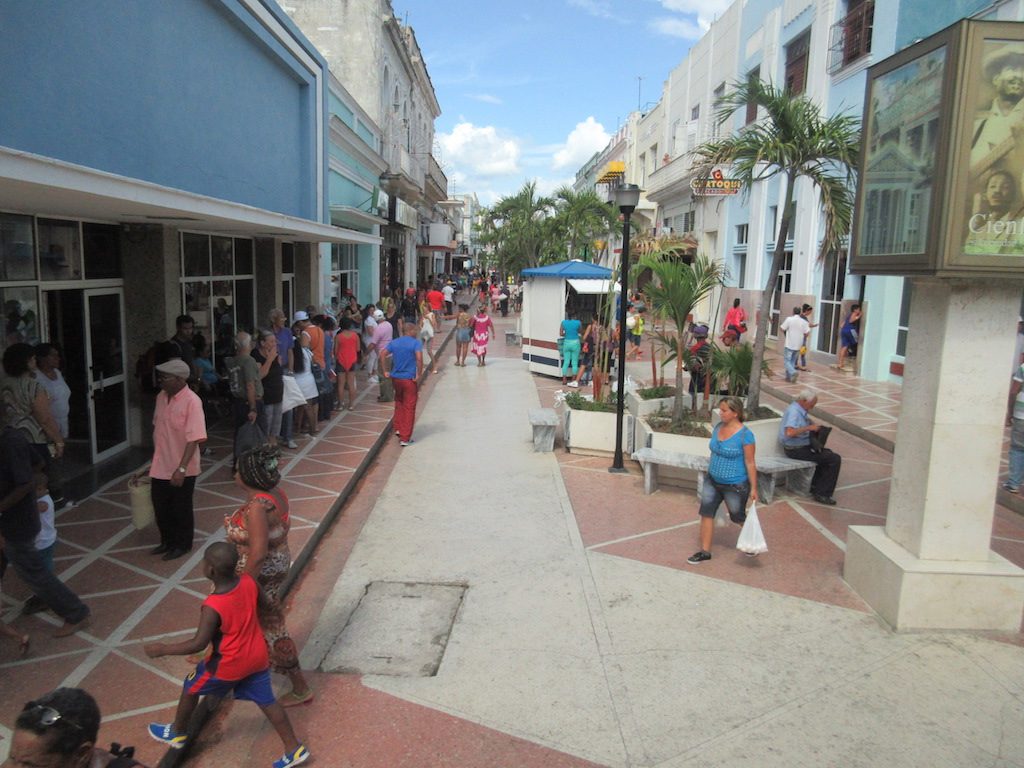 This morning our fist stop was at the local Cienfuegos Botanical Gardens set on something like 3,000 acres of land. The botanical garden was started in the early 1900’s when a Dr. Atkins from Harvard University bought a sugar plantation. He traveled the world collecting species of plants from all the tropical climates and brought them back to Cuba to create the botanical garden. They used the plants in research at Harvard University. We had a guide by the name of Hilda who gave us a brief walking tour of a small portion of the garden. She had been working at the garden for 22 years and was extremely knowledgeable about the plants. We saw a variety of plants we recognized and many that were new to us.

Next we headed to the center of Cienfuegos where we walked the main pedestrian shopping street and visited the main square named the Parque Jose Marti. Many of the buildings have been restored–or are in the process of being restored–around the main square. The great majority of the shops are all government owned at this time with the exception of some of the art shops and a clothing shop. The main square is the largest in Cuba, and being a Saturday there were lots of people out with their families shopping and enjoying the outdoors. The strange thing was that there were almost no cars on the streets around the square. There are so few cars that no matter where you go there is little to no traffic. More likely you would need to wait for a bicycle or motorcycle to pass to cross the street than to worry about a car.

We had lunch at a local Paladar not far down the coast from the center of town called the Finca del Mar Paladar. Here we enjoyed a pumpkin (Squash) soup, green salad, choice of red snapper, shredded beef or grilled chicken breast, steamed squash, green beans and ice cream or flan for dessert. We were seated on the patio at this beautiful restaurant with views of the ocean but it was very warm and humid. We had lunch with Alan and Tim, from Los Angeles, who are on the trip with us. They were suggesting that we try a new cruise website called cruisecompete.com and also Google Flights for airline tickets.

After lunch we headed to the Marti Museo Provincial (Museum on the main square) for a performance by the Cienfuegos Chamber Orchestra which has existed for 10 years and now consisted of a pianist, three violinists, two violas, a bass player, and a cello player. They performed about five songs for us, including one in which they sang. They were a small group but were very talented musicians who seemed passionate about their craft. Many had started studying at age 7 or 8.  Most were in their 20s/30s and one was about 50.  After the concert we looked around the small museum which had everything from early indigenous people’s tools, to fine art to home furnishings from a century ago. Unfortunately, it appeared that the roof leaked, the wooden windows were rotted and the building was in dire need of some TLC.

We had some free time to wander around after the concert and Kent found a small wooden car to purchase for our collection of travel treasures. Many of the shops sell these wooden cars that represent the vintage American and Russian cars you find throughout Cuba.

We arrived back at the hotel about 4:00pm for a rest before cocktails at our hotel at 6:00pm followed by dinner back in town at the Casa Prado Paladar. The dining room was quite small but the wait staff was very pleasant and attentive making for a wonderful evening. They served us fresh bread rolls, a warm salad of mixed vegetables, a choice of grilled pork, fish, beef, shrimp or chicken. The meats came with four sauces, a sweet and sour, mayonnaise, green pepper and creole. The main course was accompanied with white or Cuban rice and banana chips. For dessert they served flan, coffee and a large shot of sugar cane liqueur that was 33% alcohol. They also sent us home with a souvenir cigar and a key ring with a barrel of rum on it that says Cuba.