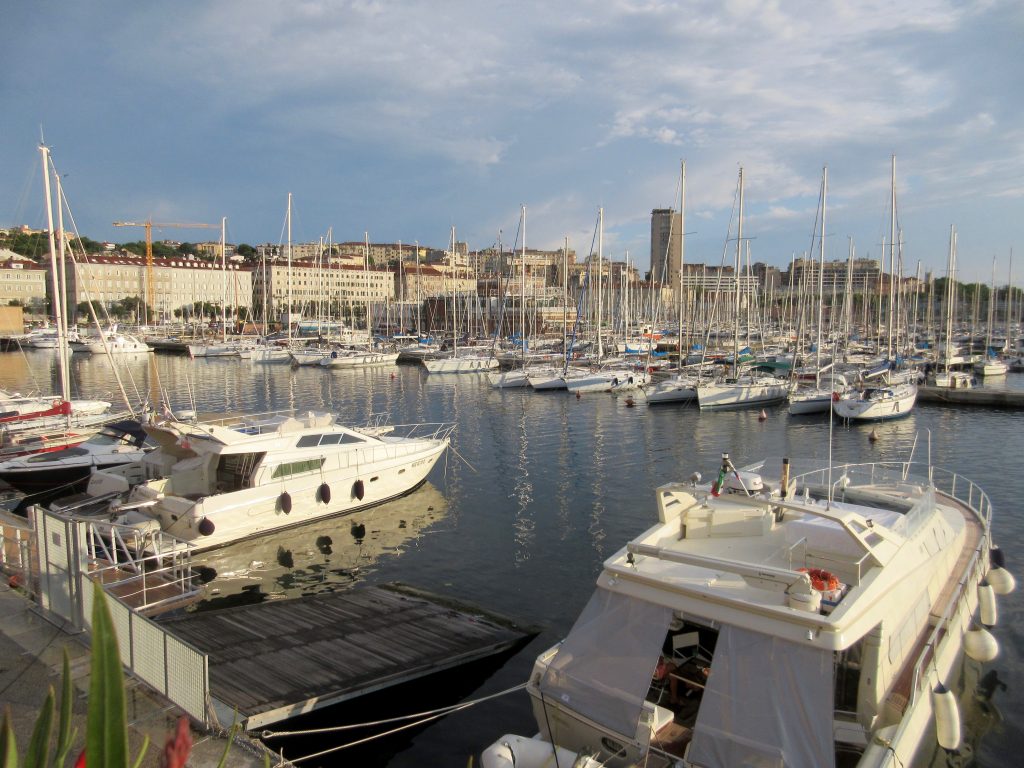 Trieste Map of our walking tour 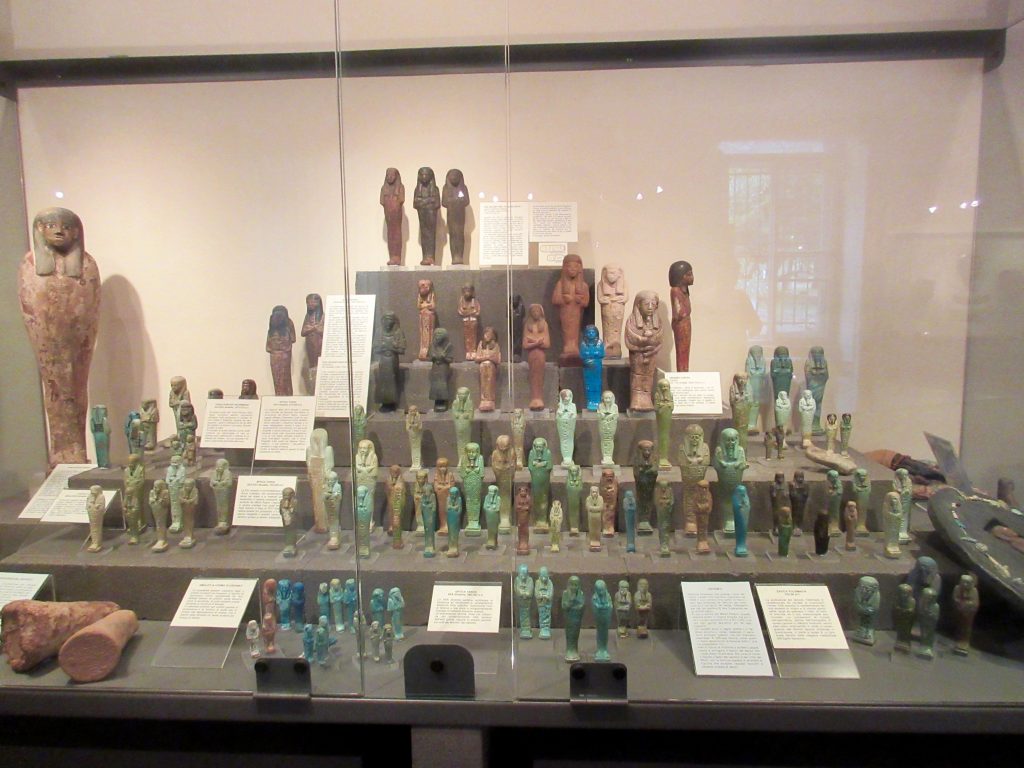 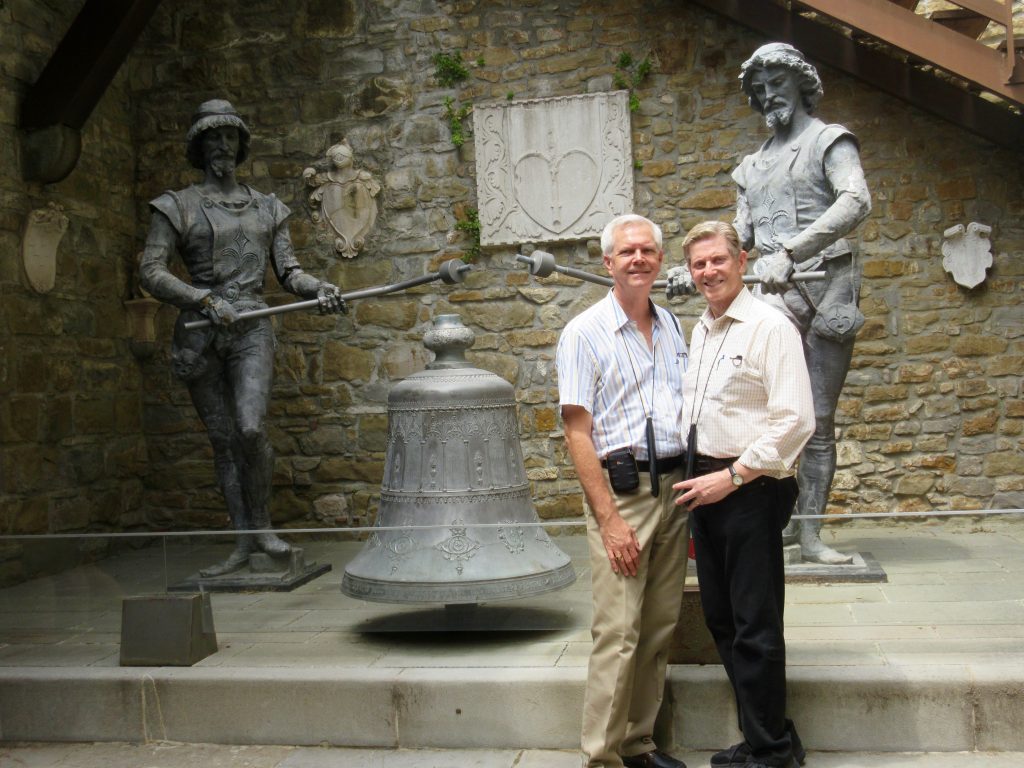 Trieste – Kent and Mark at the Castle 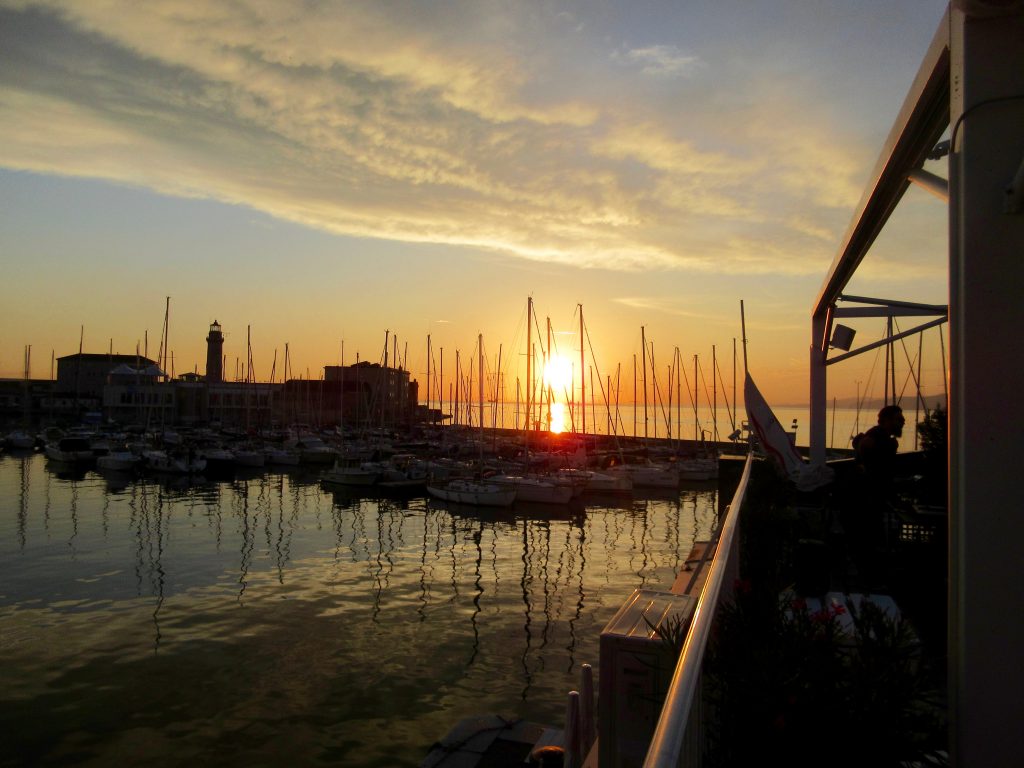 Trieste, with about 240,000 inhabitants, is located on the Adriatic Sea in the north-east portion of Italy, near the borders of Slovenia and Croatia. During the 19th century Trieste was the fourth largest city of the Austro-Hungarian Empire after Vienna, Budapest and Prague. By the end of the 19th century it emerged as an important hub for literature and music. In the 1930’s Trieste underwent an economic revival and was an important spot in the struggle between the Eastern and Western blocs after the second world war. Today Trieste is one of the richest regions of Italy and is a center of shipping, ship building and financial services.

We had a leisurely morning after our long trip arriving yesterday. A wonderful breakfast was served at the hotel between 7:00 and 10:30am. The hotel dining room is an old world style room with large glass windows overlooking the main square of Trieste. They served fresh fruit, assorted pastries, cheeses, cold meats, eggs, bacon, coffee and juice.

At 11:00am we met up with Kent and Christine, along with the rest of our group, to get a brief update on the agenda for today and our trip to Rovinj, Croatia tomorrow. We were given audio devices for the day with a self guided walking tour map of Trieste. The tour took Mark and Kent all around the central part of Trieste with selected stops where we could listen to the audio device for the history of the stops. Along the way, we picked up another member of our group, Nancy, and stopped at a museum with many artifacts brought to Trieste from Egypt, including a variety of mummies in beautifully ornate sarcophagus. The three of us stopped at several churches and explored those along the way. There is a triangular shaped castle at the top of the hill where we got great views out over the city. The castle had an armory museum as well as a lapidary museum where we saw many artifacts from previous civilizations. There were many mosaics floor remnants, busts, statues, pillars, and carved remnants from local buildings. We visited the old Jewish quarter where some 6,000 lived in times gone by and now only 700 reside in this area of town. The Irish writer James Joyce once lived in Trieste and so there are many statues and references to places that he frequented around town. There are still remains from a Roman amphitheater that seated about 3,500 people. The night that Giuseppe Verdi died in 1901, the city counsel convened a meeting and re-named the local opera house in his name.

We stopped along the way to have a small bite to eat and drink before proceeding on our way around town. By late afternoon the sky had turned a dark gray and it began to rain. We returned to the hotel for a short nap as the rain and wind strengthened and an electrical storm passed overhead.

Kent and Christine had planned a roof top dinner for us this evening at a local restaurant on a pier not far from our hotel. After the rain and wind had stopped we were still able to enjoy a wonderful evening on the pier. With the warm weather things dried out quickly and all of the sidewalk cafes were busy serving dinner outside. There was a DJ playing music from the 60’s and 70’s and people were dancing.

For dinner they brought us pitchers of Mojito’s with potato chips followed by small squares of pizza as an appetizer. Then came a very large bowl of black and white rice mixed with carrots, peas and corn. Next they served an octopus ceviche with olives and small bits of potatoes. For the entrée they served bowls of lightly battered and deep fried squid and sardines. Not exactly our favorite but plenty of food for all.

The large town square was sealed off for the evening concert and people waited for hours in the pouring rain to get into the square for the free concert. Back at the hotel we enjoyed the remainder of the concert on the square from our hotel room just by opening the window.