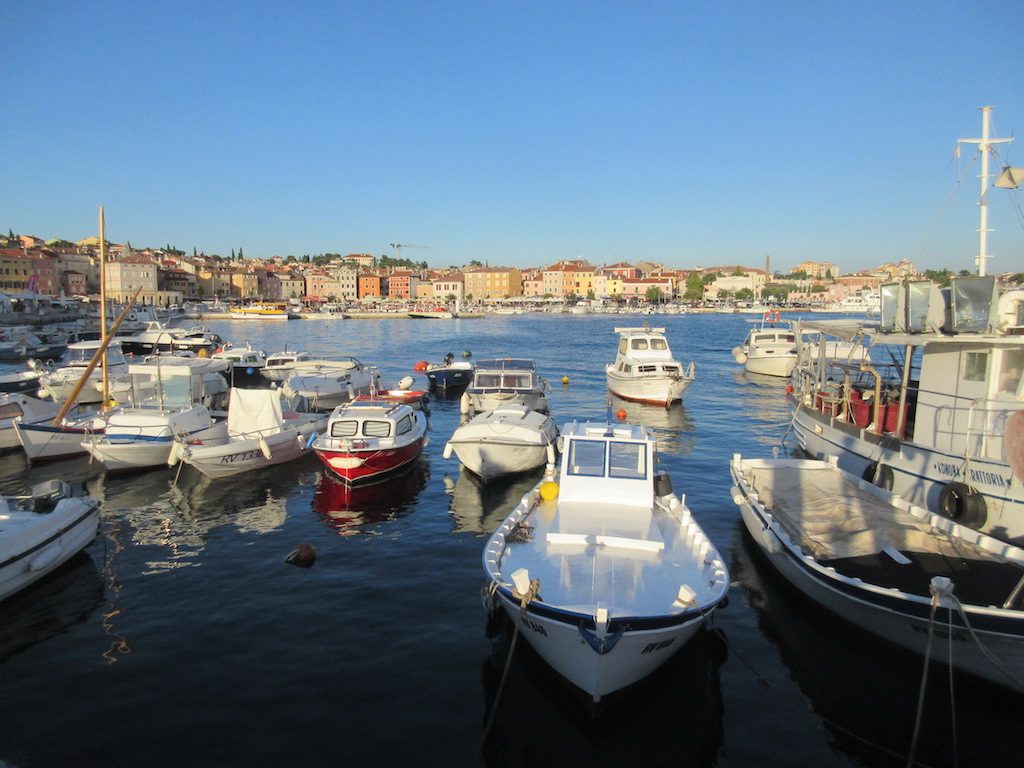 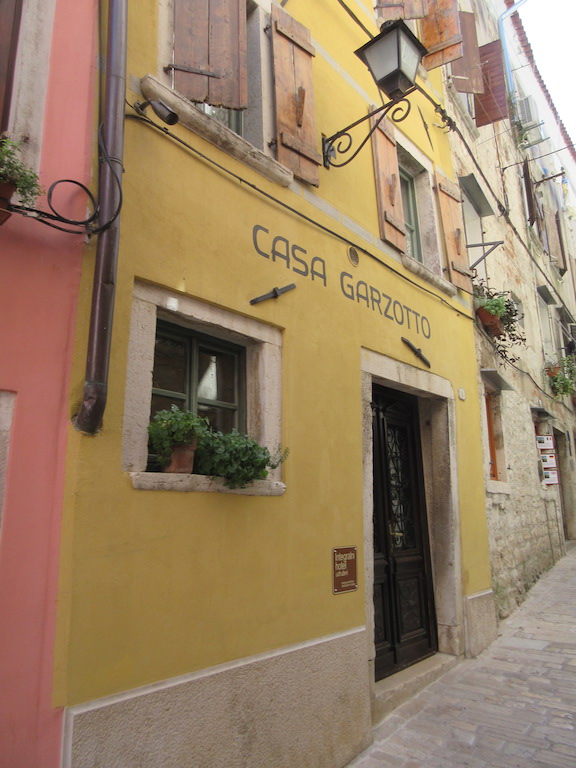 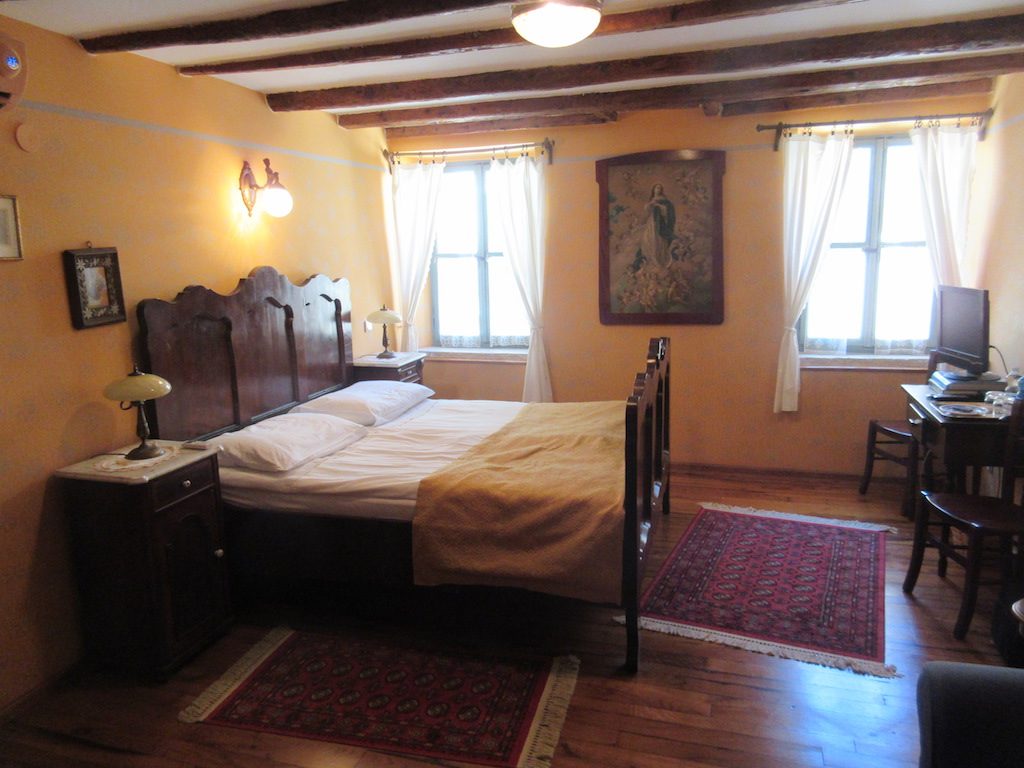 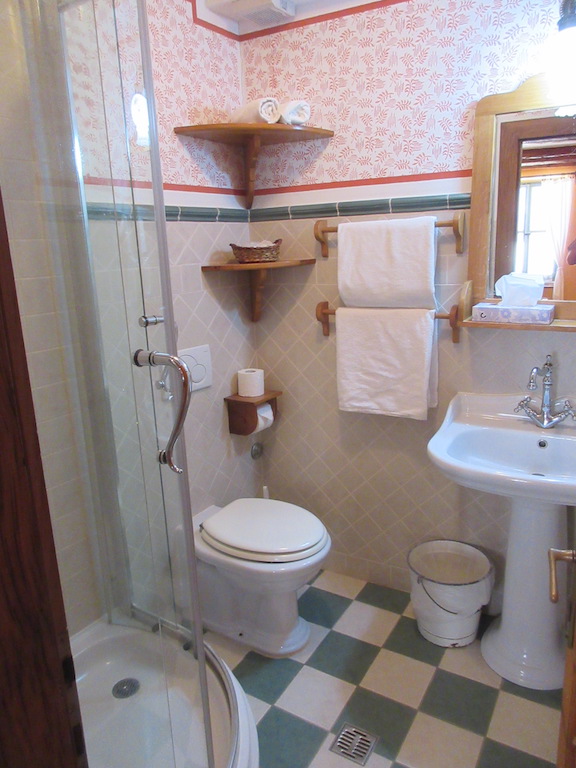 After a quiet relaxing morning at leisure we departed Trieste, Italy by private coach bound for Rovinj, Croatia. We had to cross into Slovenia and from Slovenia into Croatia. The weather has been very warm with what the locals called a heat wave. With the humidity the temperature felt like 103 degrees. The border of Slovenia was just a ten-minute drive from our hotel in Trieste. With both countries being a part of the European Union, there was no border control, we just drove across the border.

About an hour after leaving Trieste we arrived at the Croatian border where there was a fairly long line of cars waiting to enter the country. The lines moved fairly quickly and it did not take long for the border patrol agent to collect our passports, stamp them and send us on our way.
We arrived at our destination Rovinj within two hours of leaving Trieste. A smooth and easy drive on a toll road constructed about four years ago. Along the highway there were many grape vines and fruit trees growing including beautiful looking figs plums. Once in Rovinj we had to disembark the bus and walk into the old town where our hotel was located. The tiny narrow streets and alley ways are not large enough to accommodate a bus so our luggage was transported by car to our hotels. Even with a car there are very few streets within the old town that a car can get down.

Kent and Christine directed us to a local bar and restaurant where we ordered lunch and drinks of our choice. Mark had a pasta with a prosciutto and Kent had a Greek salad. After lunch we checked into our hotel rooms around the old town. Due to the small hotels within the old town, our group was scattered between three hotels and six different buildings; each hotel room within an historic old building and each room unique to the next. Our room was a third floor walk up a steep staircase to a very large room on the top floor of a small building. Our room was quite large with an antique bed with head and foot boards. A pair of antique night stands with marble tops, a small desk with a chair, a sofa and an armoire for hanging clothes. The floors were hardwood, the walls stenciled with light blue flowers on a peach background, and natural rustic beamed ceiling. A small bathroom with a small modern corner shower, sink and a toilet. Not fancy, but very manageable.

After lunch Kent and I explored a bit of town including the old church at the top of the hill. The narrow winding streets in the old town are paved in cobble stones that are well worn and many of the alley ways have many steps to climb the hill of the town. Charming art galleries, shops and restaurants line many of the streets and alleys along the way. The narrow streets and tall buildings create shade from the afternoon heat.

At 7:30 we met up with Kent and Christine and the rest of our group for a short orientation of the old town and drinks at a waterfront bar and restaurant. It was Salsa night at the waterfront so they had a DJ playing Salsa music and many of the locals and tourists were dancing the night away. The waterfront is lined with small gelato shops, restaurants and bars all filled to capacity with tourists. Ferry boats bring passengers to town from nearby cities, including Venice. They may come for a day, a week or a month but the streets are very busy.

After drinks we found a small pizza restaurant on a narrow alleyway where we had a mixed green salad and a pizza. The Kuna is the local currency and the current conversion rate is about 7 Kuna to one US Dollar. Our pizza, salad and soft drinks cost 115 Kuna.

Located on the Adriatic Sea and the Istrian peninsula, this Croatian city of about 15,000 is a popular tourist town. The town is officially bilingual with Italian and Croatian being equal.

Rovinj was once an island just off the coast called Mons Albanus, with the first archaeological traces of Rovinj dating back to the Bronze Age, while the old city started developing around the 3rd century. In the 18th century, the city began to expand towards the mainland and the channel between the island and the mainland was filled in creating a peninsula out of the island. The limited space caused the city to build narrow streets with narrow homes and small town squares.

Kent and I were here in 2008 and found it to be a charming town then and now.