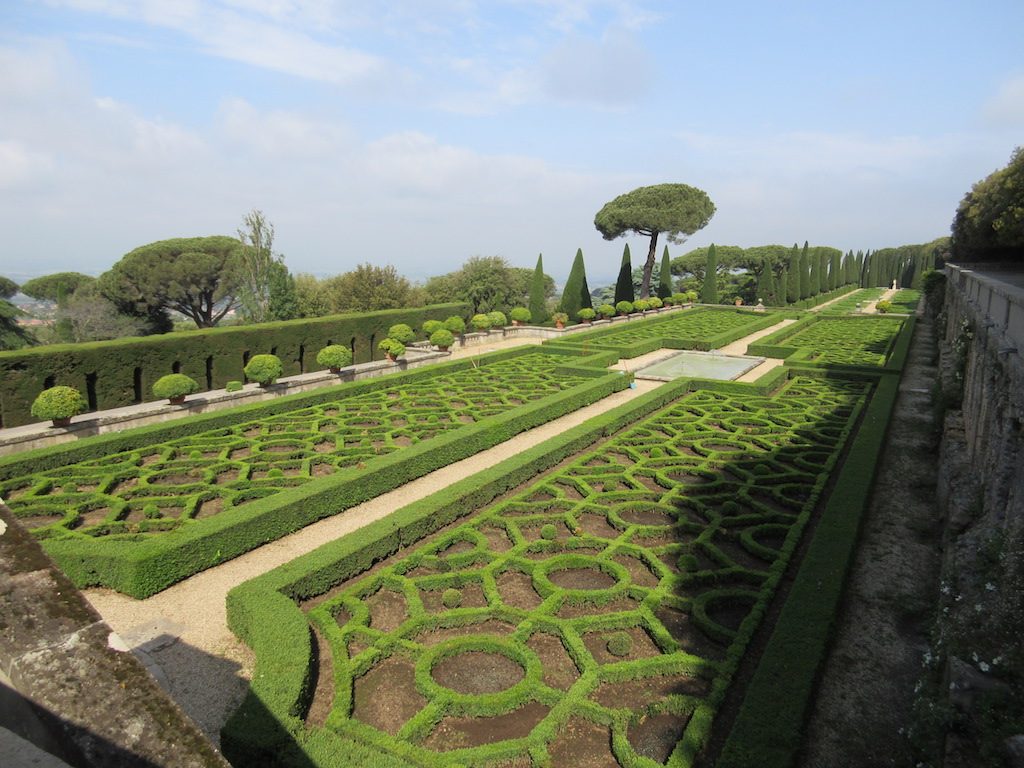 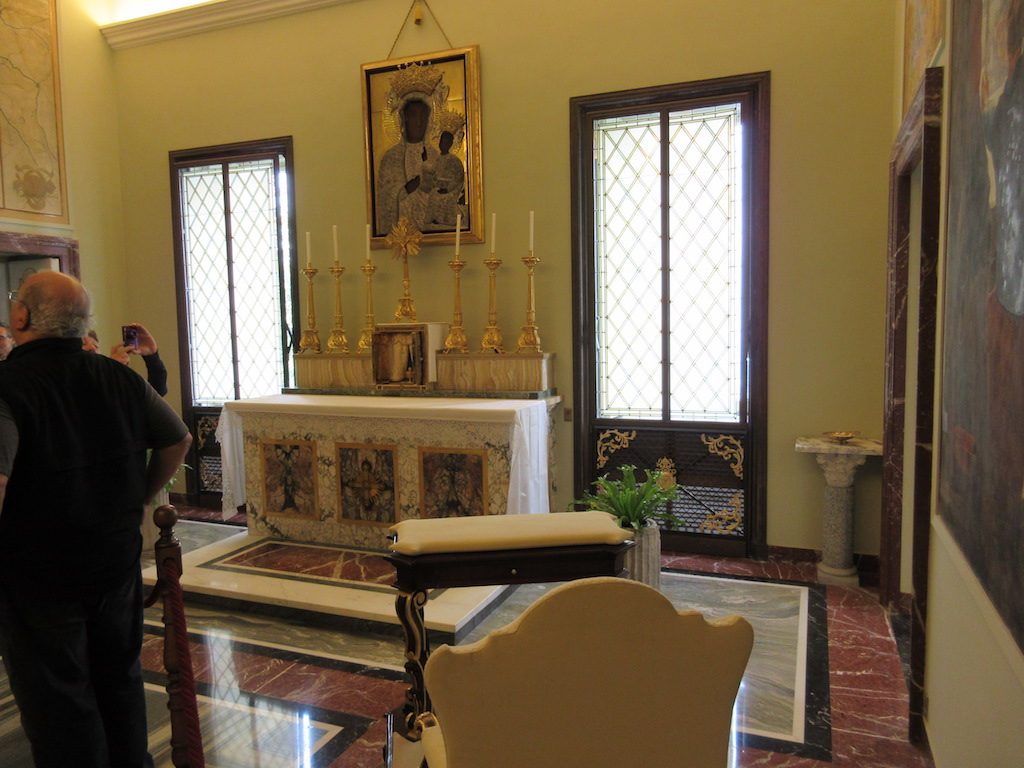 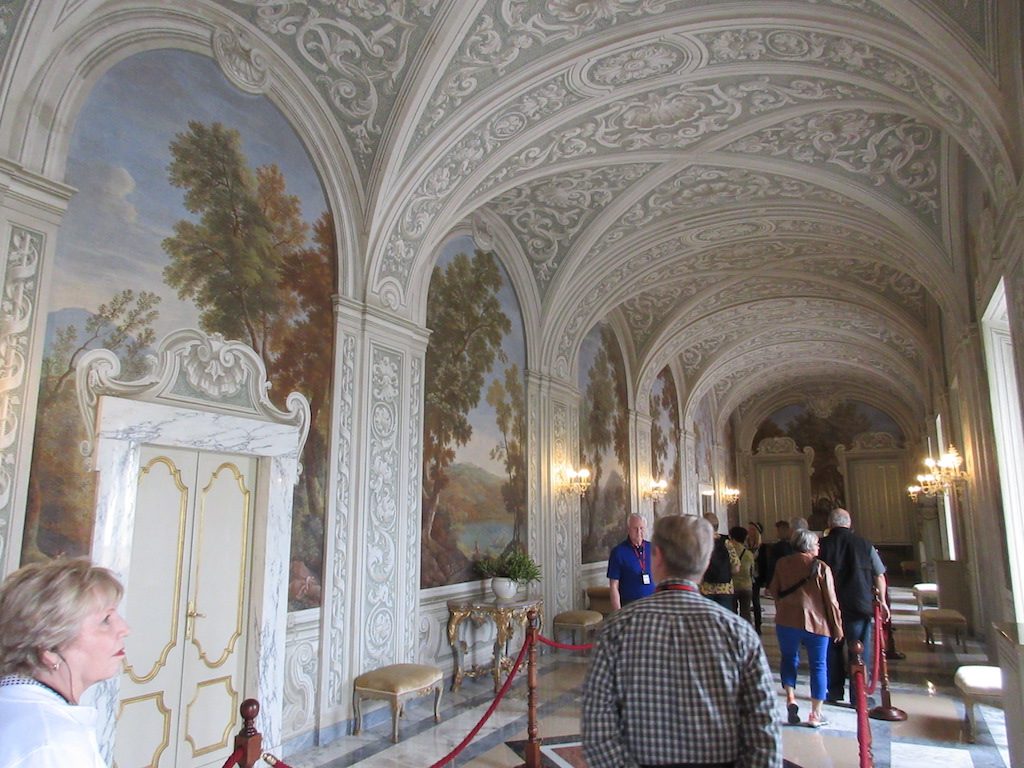 Located about 16 miles southeast of Rome we visited the small town of Castel Gandolfo with about 9,000 inhabitants. This scenic community has served as a summer residence and vacation retreat for the pope at the Papal Palace of Castle Gandolfo. The Lateran Treaty of 1929, in which Vatican City was recognized as an independent country, gave the Villa Barberini Castle–along with the adjacent Villa del Morro and Villa Cybo–to the Vatican. The adjoining Lake Albano is surrounded by summer residences, villas, and cottages, many of which were built during the 17th century. The lake was also home to the rowing events during the Rome Olympics.

The grounds were expanded later by Pope Pius XI by acquiring some additional land as a small farm. Today the farm has many chickens, cows, sheep and other animals. The grounds of the villas are exquisitely maintained by twenty full and part time gardeners. There are fountains, statuary, boxwood gardens, and a huge variety of walking paths and terraces, plants and flowers. The grounds are approximately 135 acres in size.

The Pope’s residence is a three-story palace where the first floor is occupied by office space when the Pope is in residence. On the second floor are photos, vestments and memorabilia from all of the Popes. The third floor is the main living quarters of the Pope with many rooms where the Pope can have private meetings with parishioners, an office space, sitting rooms, a small chapel and a large bedroom. The current Pope (Francis) does not visit the residence and prefers instead to make visits to a neighboring monastery in the woods near the lake. The residence has been open to the public as a museum for the last few years.

During World War II it is said that Pope Pius XII opened up the grounds of the Castel to refugees escaping the fighting in Rome. On January 22, 1944, the first of what became 12,000 people began arriving, bringing with them cows, horses, mules and sheep. Included were many Roman Jews, and other non-Catholics. During the time they lived there, 36 children were born, many of whom were named after the Pope. It is believed that the Pope’s private apartment was converted into a nursery to house all of the new born children.

After our tour of the Pope’s summer residence we traveled by bus about four hours including a break for a quick lunch at a roadside stop. We checked into the Towers Hotel before heading out to see the town of Sorrento. The drive into town was along a twisting turning road along soaring steep cliffs jutting up from the sea. The town is very hilly and covered with homes, vineyards, citrus gardens, vegetable gardens and Kiwi vines. The town is very charming with many shops along a pedestrian street, cobblestone streets and window boxes with colorful flowers. Views from many restaurants overlook the Tyrrhenian Sea.

For dinner we headed to a very large restaurant overlooking the sea (although it had begun to rain and so we were unable to enjoy the outdoors and the skies were gray and filled with clouds). For dinner we started with an appetizer plate of cheese, prosciutto, salami and deep-fried pasta dumplings. Next came a slice of pizza before an entrée course of pasta and ravioli. This was followed by a shot of the local liquor Limoncello and a pastry similar to pound cake covered in a lemon cream.