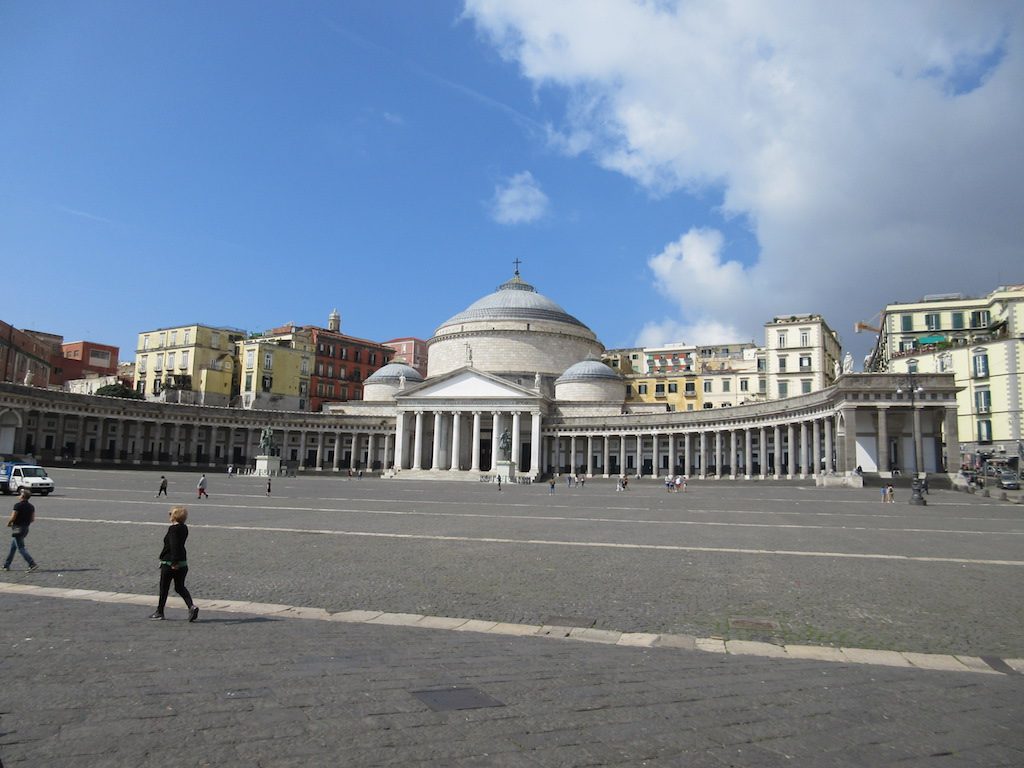 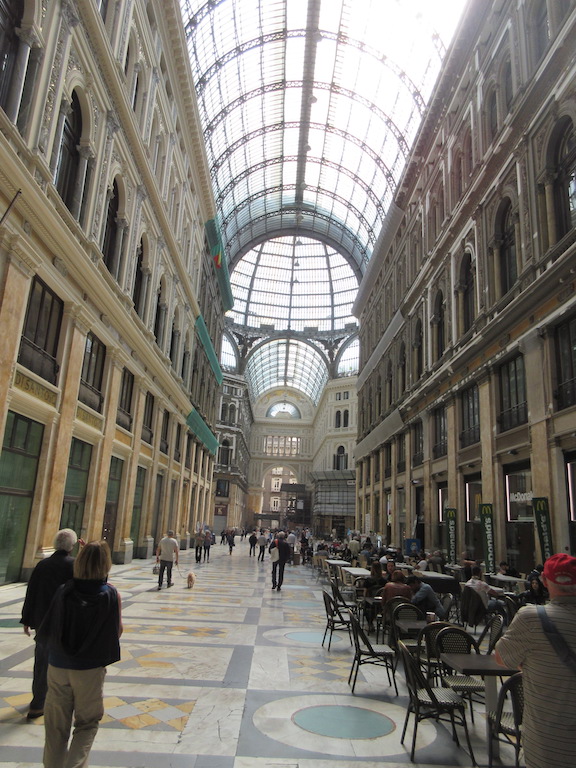 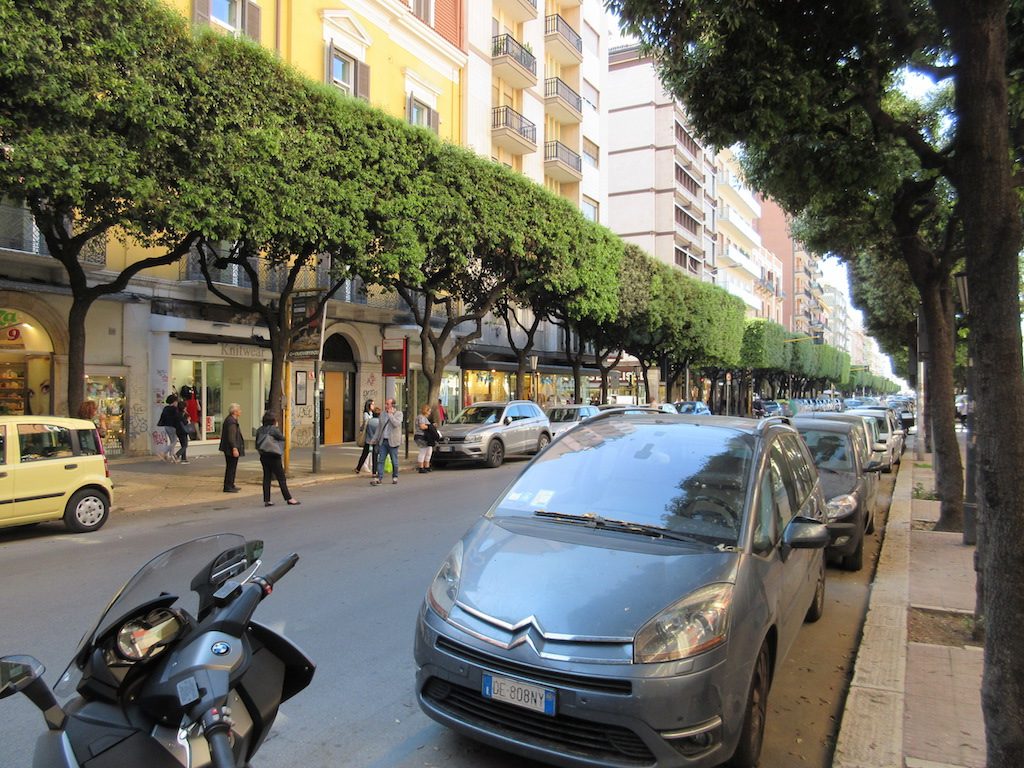 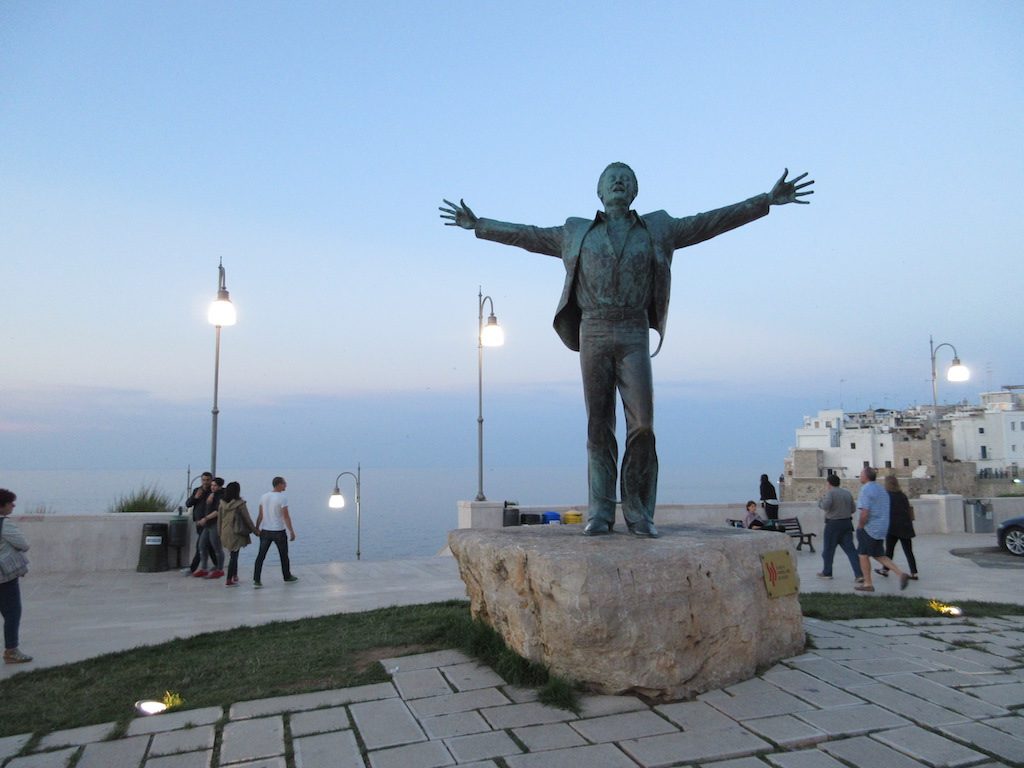 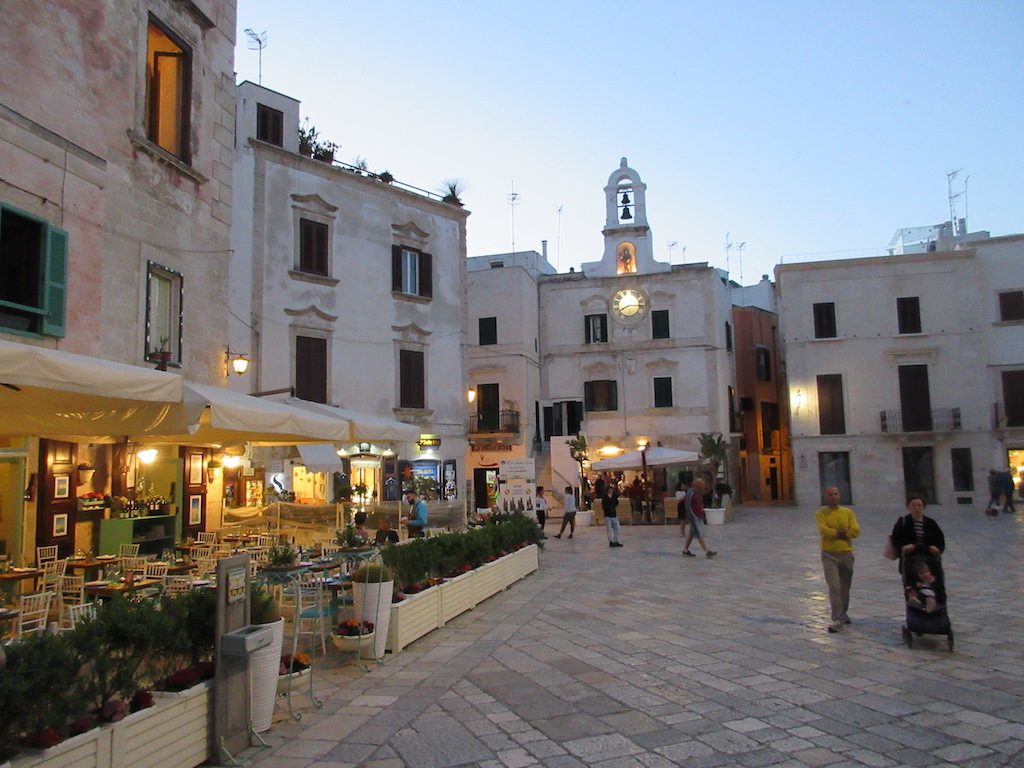 With one million people, Naples is the third largest Italian city after Rome and Milan. It is located on the west coast of southern Italy. Its historic city center is the largest in Europe, covering 4,200 acres and is a UNESCO World Heritage Center. The city has many important museums and is home to some 448 historic churches.

We took a city tour on the bus to see some of the highlights around the city of Naples before a local guide gave us a very brief tour of a few places near the port. We them had an hour or so to explore on our own before meeting up at a local pizzeria to try the Neapolitan pizza. They say that Naples has the best pizza due to the quality of the water in the area. The pizza was a simple bread dough with a small amount of sauce, some cheese and a basil leaf for decoration. It was simple but good.

After the pizza and drinks we stopped in to the shop next door to sample four flavors of the local Limoncello. They were sampling the traditional lemon style, as well as a crème/lemon flavor, an anise flavor and a cantaloupe flavor Meloncello.

We then headed east towards the heel of the boot on the Adriatic Sea to the town of Bari. Bari is located on the east coast of Italy on the Adriatic Sea and is home to about 350,000 inhabitants while the surrounding metropolitan area is home to 1.3 million people. The city is a university city and has a port as well. The distance from Naples is about 200 miles and the landscape changes dramatically. Near Naples there are many hills and mountains around the city while in the Bari area the land is mostly flat and filled with agriculture. They claim to have more than sixty-million olive trees in the area and we saw many vineyards, citrus trees, vegetables and walnut trees growing.

Our hotel for one night was the Grande Albergo delle Nazioni Hotel located along the waterfront near the port. It was a very modern hotel with very unusual furnishings. The walls in our room were upholstered in a powder blue tone on tone print fabric, the headboard was blue and white in a modern shape, the chairs were powder blue with a crème colored lacquered table and the accent in the room was an orange cabinet that hung on the wall and housed the mini-bar. The bathroom was very modern with a powder blue vanity top, irregular shaped mirror and a molded plastic shower pan like I’ve never seen before.

We took a short walk into the newer part of town to get an overview of the city before heading out again for dinner.

In the evening we visited the quaint town and fishing village of Polignano a Mare. The village is the birthplace of a local famous singer by the name of Domenico Modugno who sang the song Volare. The narrow streets are filled with shops and cafes, one of which we stopped at to try the local fish cuisine. Much of the fish in the area is eaten raw similar to sushi. Mark had a shrimp sandwich that was on a delicious roll with cheese, potato chips, lettuce and who knows what else. Kent enjoyed the mixed fried fish plate with shrimp and calamari. Unfortunately, they fried the shrimp whole so it was a bit of work to shell the shrimp before eating them.

There is a large statue of Domenico Modugno along the shore where people stop to take photos with him. There is an older walled portion of the city that is pedestrian only with meandering narrow cobblestoned streets. The narrow streets are filled with tiny shops about the size of a living room that are beautifully decorated and their merchandise is spilling out the door onto the streets. Many people were wandering the streets stopping at restaurants, bars and gelato shops for something to eat. We stopped at a gelato shop that Kent thought had the best chocolate and Nutella gelato he had ever tried.