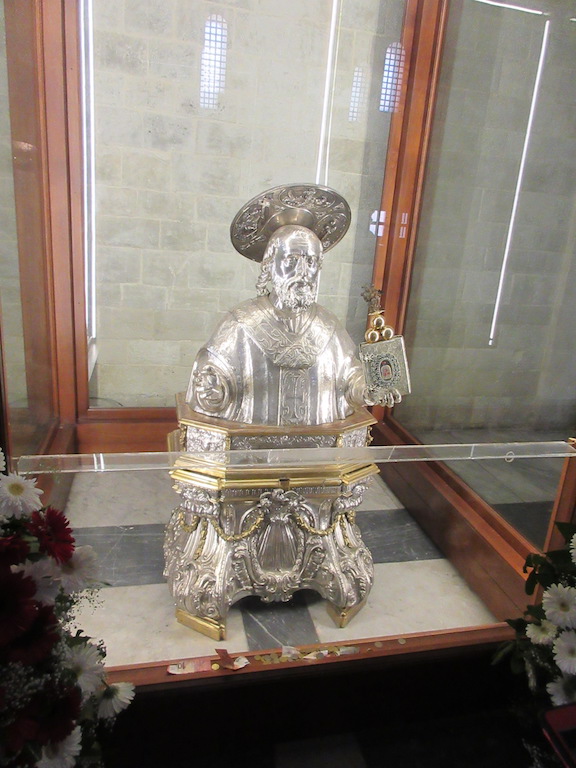 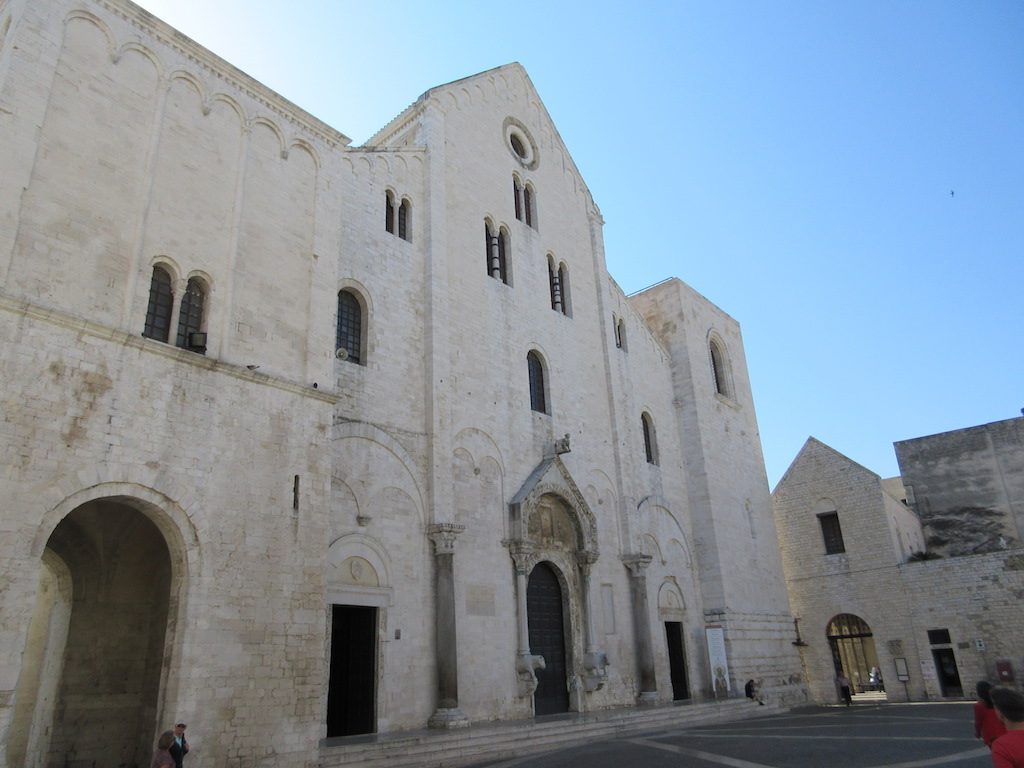 We took a walking tour through the city’s oldest district called the Bari Vecchia. This oldest historic part of the city is located on a small peninsula and once had a wall surrounding it, although much of the wall is now gone. The area is a labyrinth of small narrow cobblestone streets with laundry hanging from the balconies. The main square is where we found the Basilica of Saint Nicholas. Here it is believed are some remains Saint Nicholas, one of the most worshipped Christian saints. The basilica was built in the 11th century. St. Nicholas was a saint who helped children including the less fortunate and is represented in statues and paintings as a saint holding three balls. These balls represent three bags of gifts that he gave to three young women who were so poor they would not be able to marry without a dowry. This is where we get the St. Nicholas connection with Santa Claus who hands out toys.

On one particular street in the old town, the women make a local type of pasta known as ears (orecchiette) because of its shape. You see them in their ground floor kitchens rolling out the dough and creating the ear shaped pasta. After drying it in the sun outside they bag it and sell it to the locals. It is said that women will only be able to marry if they can make this type of pasta. The test of whether or not you can make it well is when your future mother in law thinks it is good.

After our visit to Bari we headed to the historic town of Lecce with a population of approximately 95,000 inhabitants. Because of the rich Baroque architectural monuments found in the city, it is often referred to as the Florence of the South. The city is filled with ornately decorated buildings and many small squares to explore. This is also an important agricultural center for its olive oil and wine production. It also exports a soft limestone suitable for sculpture and they also produce ceramic products here.

We stopped to taste a local delicacy called the pasticciotto, a type of Italian pastry traditionally filled with either ricotta cheese or egg custard and served warm. The pasticciotto are often eaten as a breakfast item but can also be eaten any time of day and are a traditional Easter pastry. They are a little larger around than a cupcake but only about an inch tall and the tops are brushed with egg to create a shiny look. Today you can also find these pastries filled with fillings like almond, chocolate, pistachio, vanilla or fruit flavored preserves. Accompanying the pastry, we had an almond-flavored iced coffee which was very good. They use iced almond milk with hot espresso coffee poured over the top. It was very sweet and delicious for those of us with a sweet tooth.

We then headed to the town of Alberobello where we checked into the Casale Del Murgese Hotel. This hotel is an ancient Baron’s farmhouse with views of the gorgeous blue sea and surrounded by olive groves. The 31-room hotel is elegantly decorated in shades of whites and cream tones. There is a large infinity pool surrounded by relaxing chaises and cabanas.

We had dinner in the large white dining room of the hotel where we were served an appetizer course of fried dough like balls and bread with fresh tomatoes like a bruschetta. For the pasta course they served gnocchi potatoes with a red sauce. The entrée was what they called a chicken stew but was not what we might call a stew. The small pieces of chicken and cut up potatoes were in a small amount of clear broth like we might call a soup. It was all very bland and not particularly exciting. For dessert they served a tiramisu. We ate with the three Australian gals and another Australian couple.