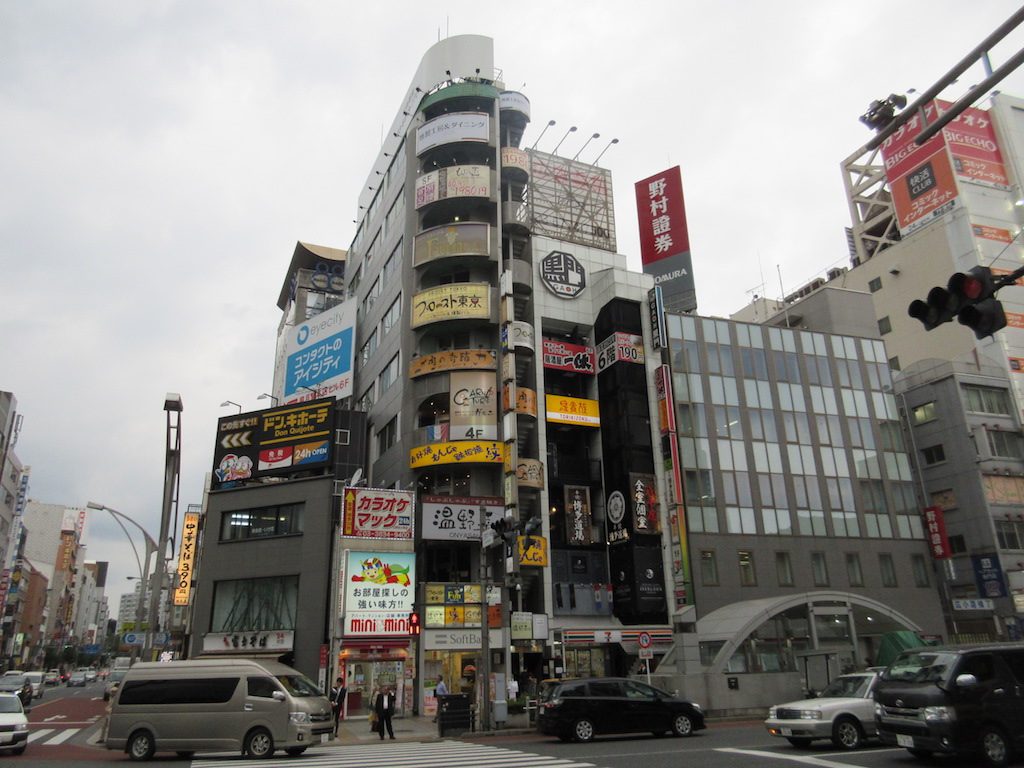 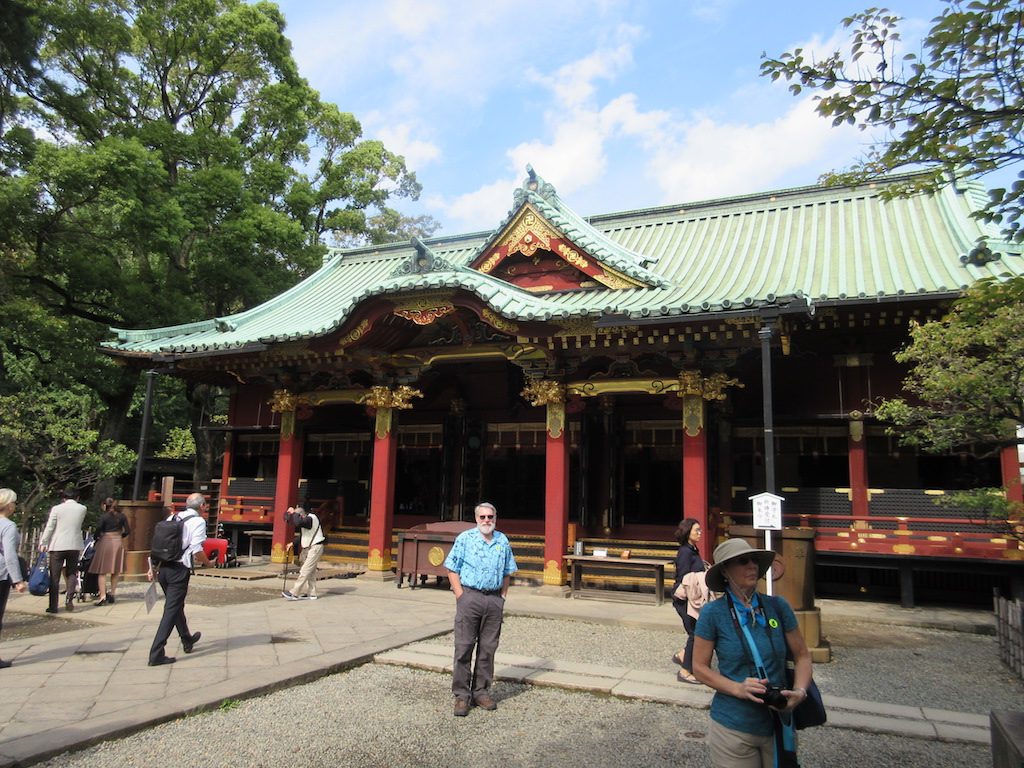 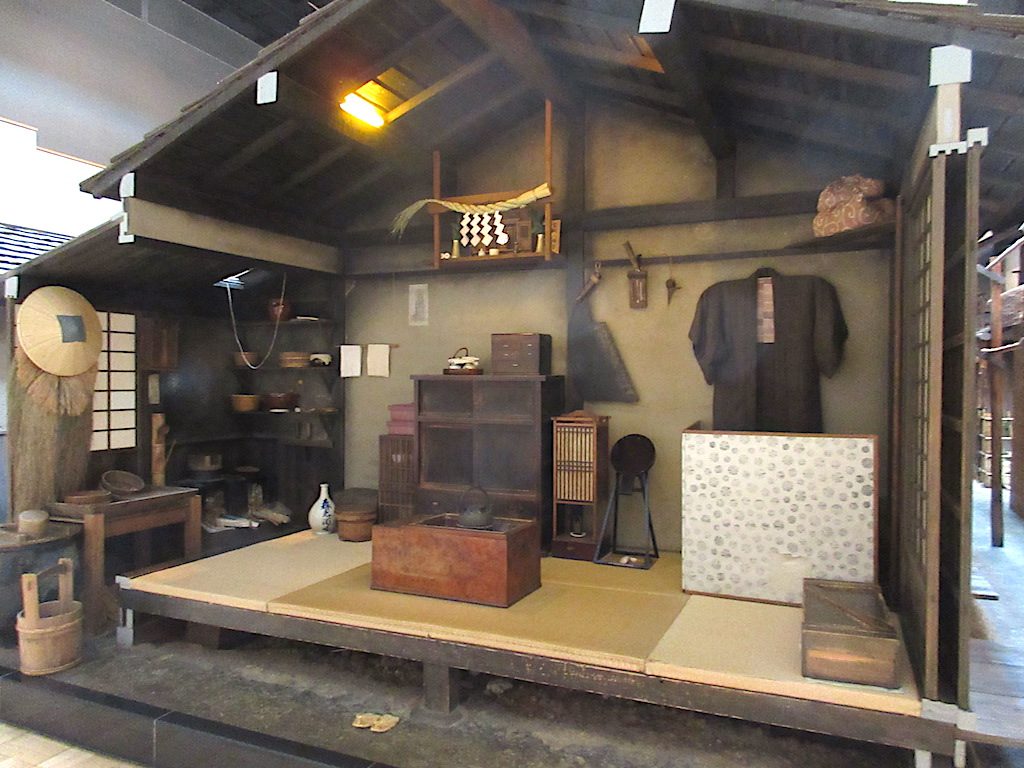 The weather on this day started out beautiful with sunshine and temperatures around 70 degrees. By the end of the day it began to rain slightly and the skies had turned gray and dark. The sun is rising early about 5:45am and setting about 4:45pm with it getting dark by about 5:00pm.

Our tour on this day was titled “Old Town Tokyo”. We headed to the Fukagawa area, east of the Sumida River, called the Shitamachi (Old Town).

Our first stop was at the Fukagawa Edo Museum, nestled in a narrow, tree-lined street among numerous temples and shrines. The museum was established in 1986, and here we saw a display from the Edo period, including everyday items and a reconstruction of Fukagawa Saga town. The town from the 1800’s was very interesting in that they had a full-scale neighborhood with homes and shops that would have existed at that time. We saw typical one-room homes with mats on the floor, a corner carved out for the kitchen and everyday items that would have been in a home at the time. They showed the watchtower that would have existed at the time to watch for fires and the fire brigade buckets in the event of fire. The homes often served as the family business as well selling things like noodles, vegetables or household items.

Our next stop was at Kiyosumi Park, near the Sumida River where it is easy to imagine you are far from the bustle of the city. The site of this park was once the site of a mansion owned by a wealthy merchant. By 1878 the surrounding area was acquired by Iwasaki Yataro, the founder of Mitsubishi. The garden served as a place for recreation for the family’s employees as well as a place to entertain dignitaries and distinguished guests. In 1923 after the great earthquake the Iwasaki family donated the land to the city of Tokyo. After restoration the property was opened as a public garden in 1932.

The gardens are extremely beautiful with immaculately manicured pine trees trimmed into topiaries. The large lake has several islands and is home to a variety of fish, turtles and birds. Unique rocks gathered from around the country create a walkway around the lake and there is also a teahouse and iris garden.

After lunch at a local restaurant we visited Nezu Jinja Shrine built for Shogun Tsunayoshi Tokugawa. The shrine has been designated a National Cultural Asset. Families visit this site when children are born and when they turn 3, 5 and 7 years old to give thanks to the gods for healthy children. The locals practice Shinto religion that believes in gods of all types including the god of the moon, sun, house, trees, and most anything that the locals come in contact with. They also believe in the Buddhist religion from India while Christians represent only about one-percent of the population.

Next, we were off to Ueno, which is a district in Tokyo’s Taito Ward, best known as the home of Ueno Station and Ueno Park. Some of Tokyo’s finest cultural sites are found here, including museums and a major public concert hall. Here we headed to the Ameyoko Discount Market (a very crowded local market area) near Ueno Station where we were given some time to shop. The streets were filled with vendors selling fresh fish, toys, shoes, clothing, food items and more. The vendors would often stand on stools hocking their goods with signs stating what type of discount or price they were offering on something they were selling. We helped our friend, Bryan, find some Bonsai pruning shears but could not find his wished-for Sandalwood soap.

The evening’s entertainment was a saxophonist, pianist and singer by the name of Craig Richard. Craig is from Colorado Springs and was featured in a television show about people who should not be alive. He is a rock climber and broke his leg while rock climbing and had to crawl for 18 hours to get out of the mountains. He was also a finalist on American Ninja’s last year. We thought that he was a very accomplished musician but his show was lacking a spark.