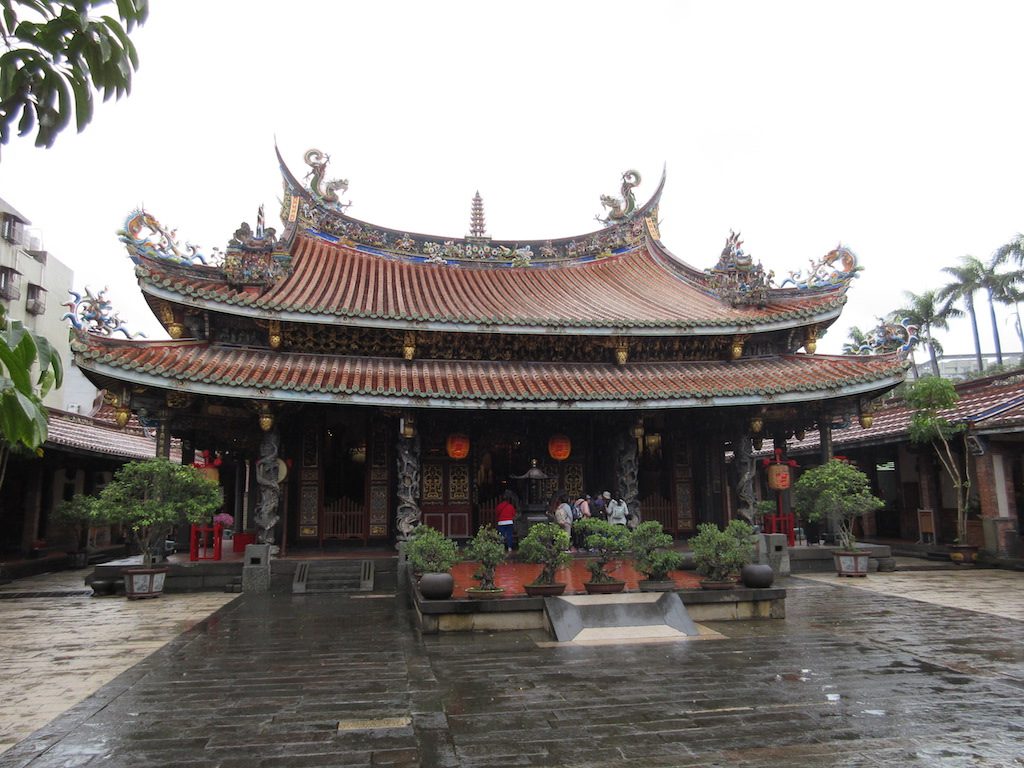 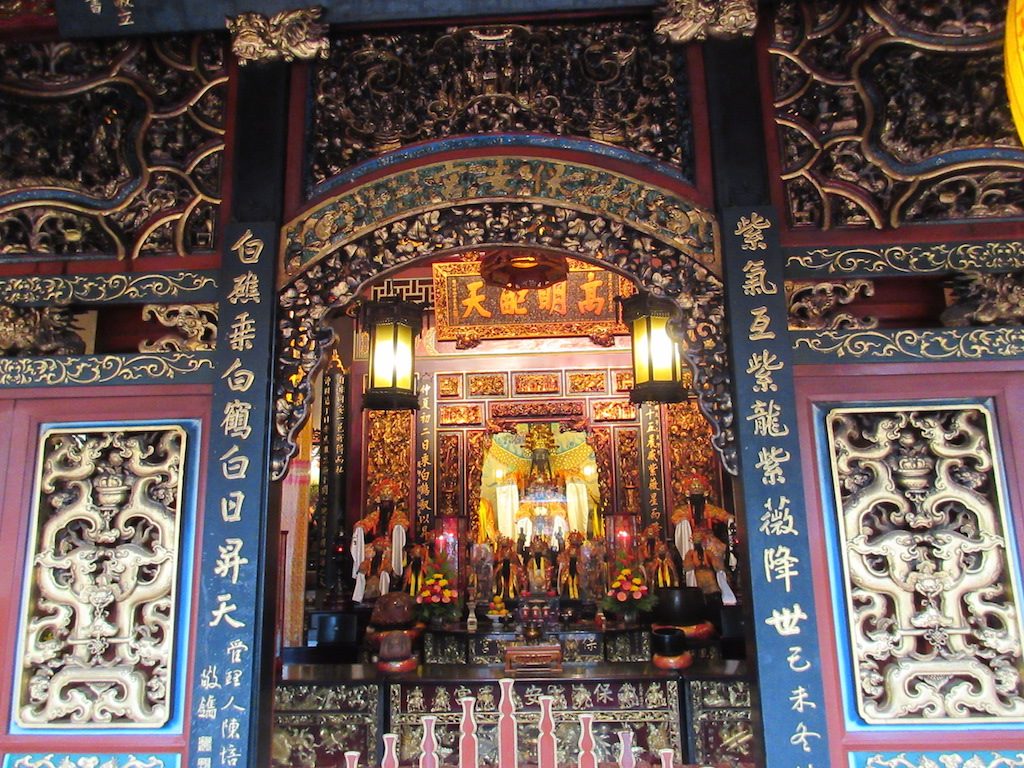 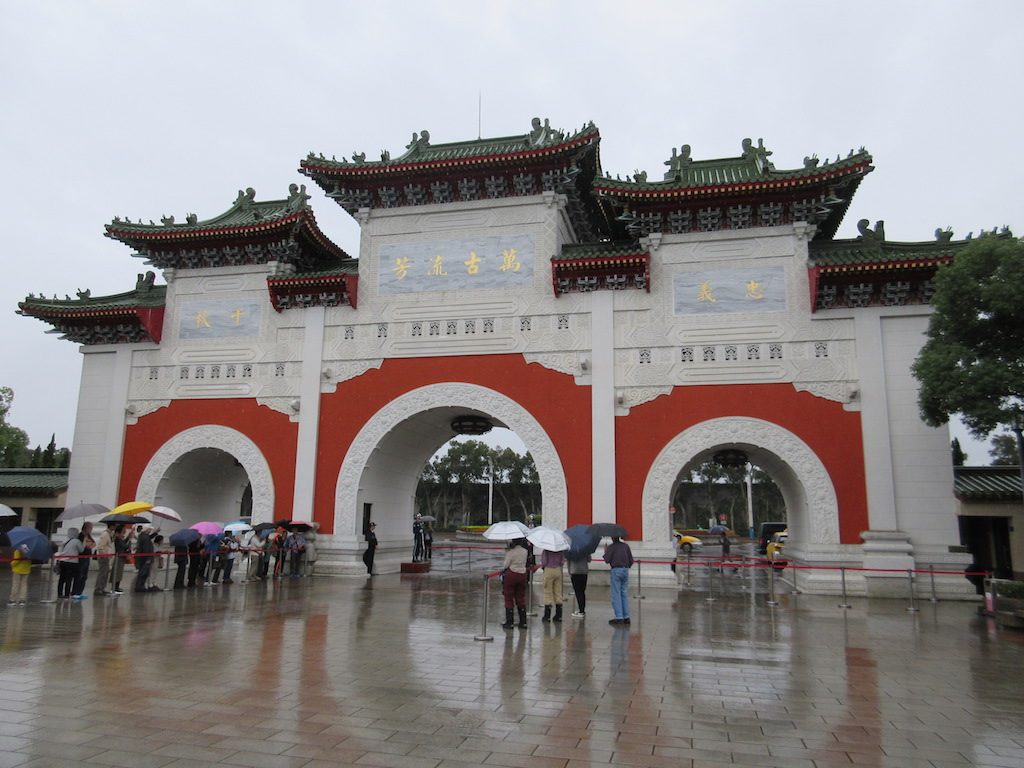 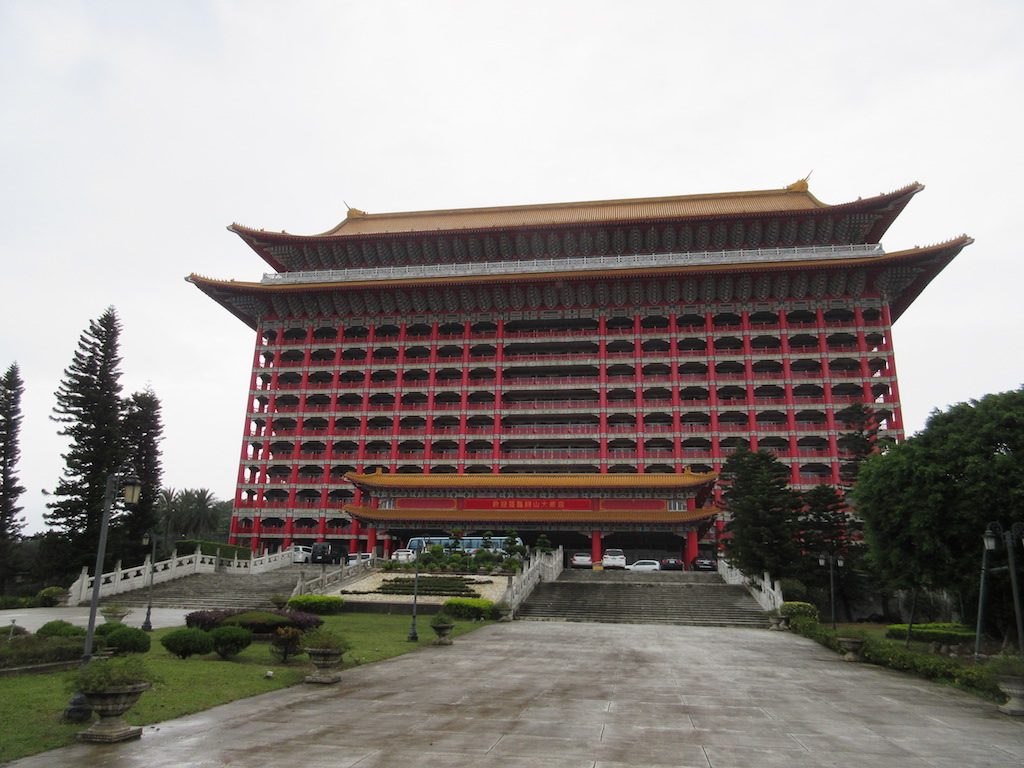 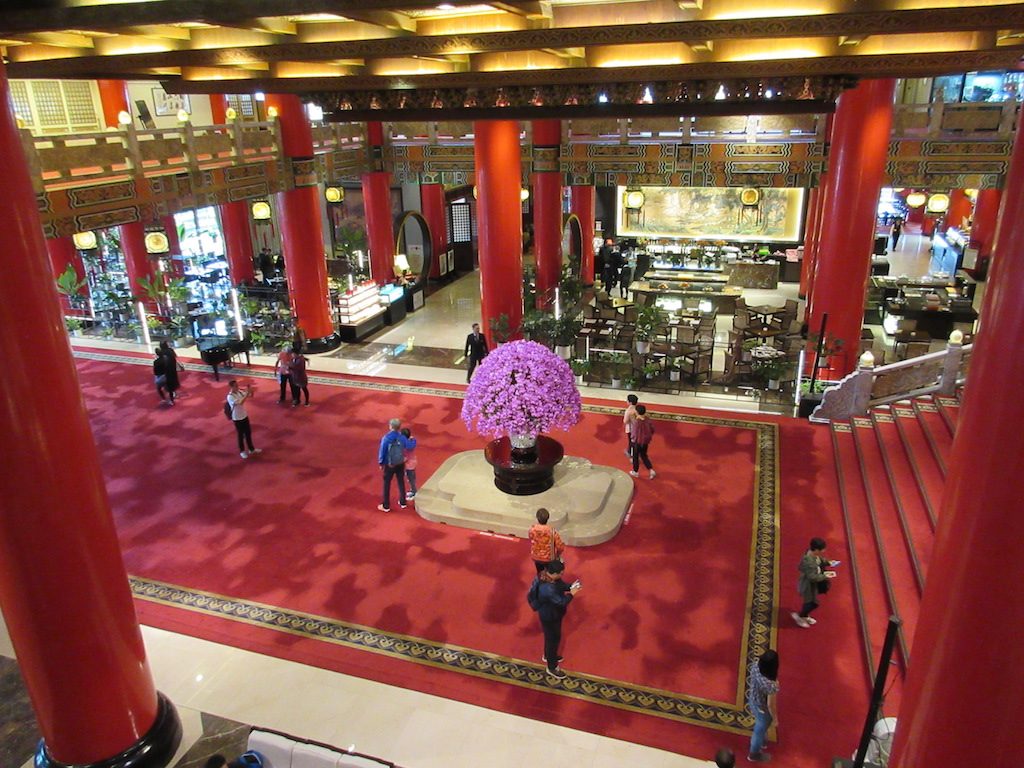 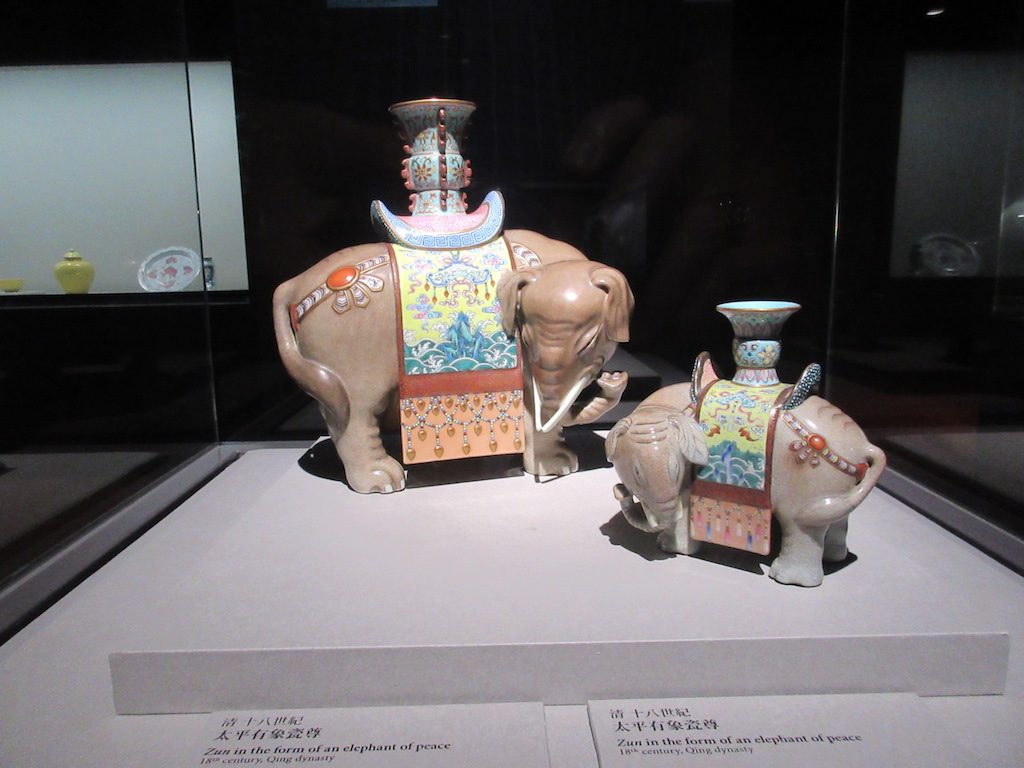 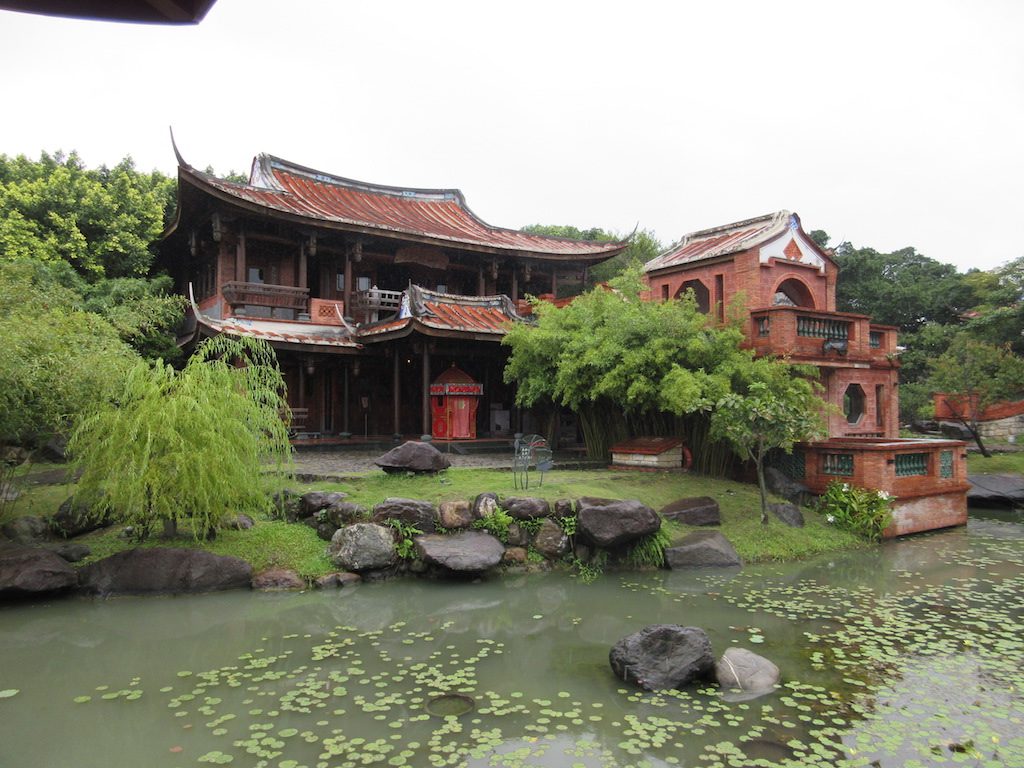 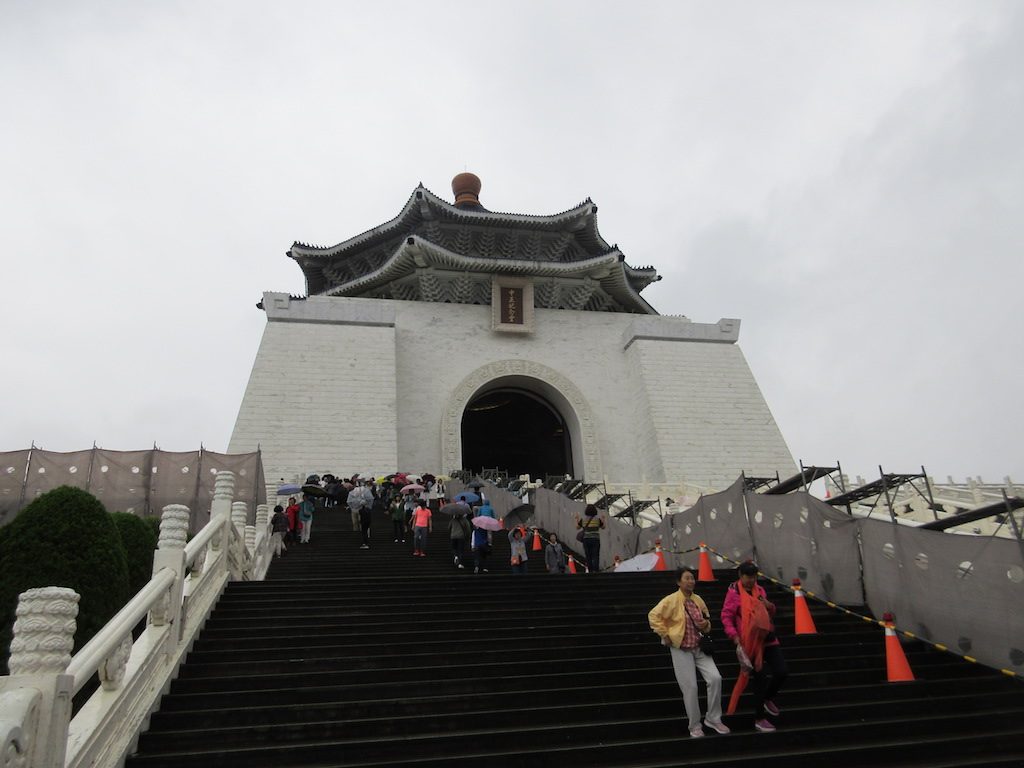 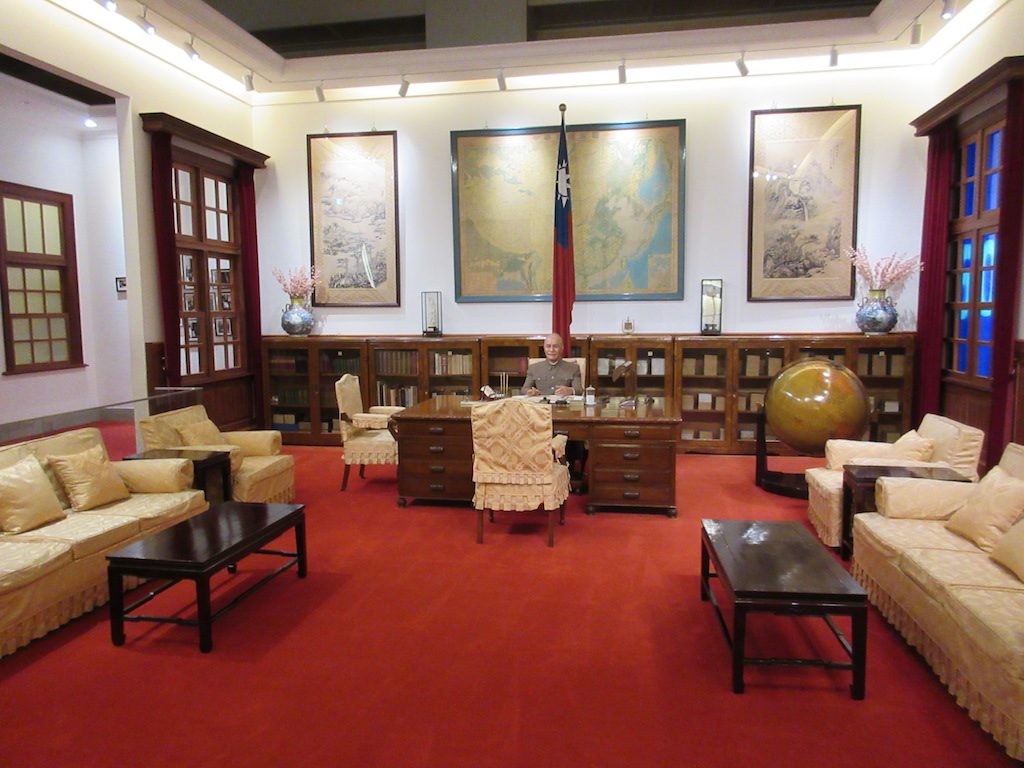 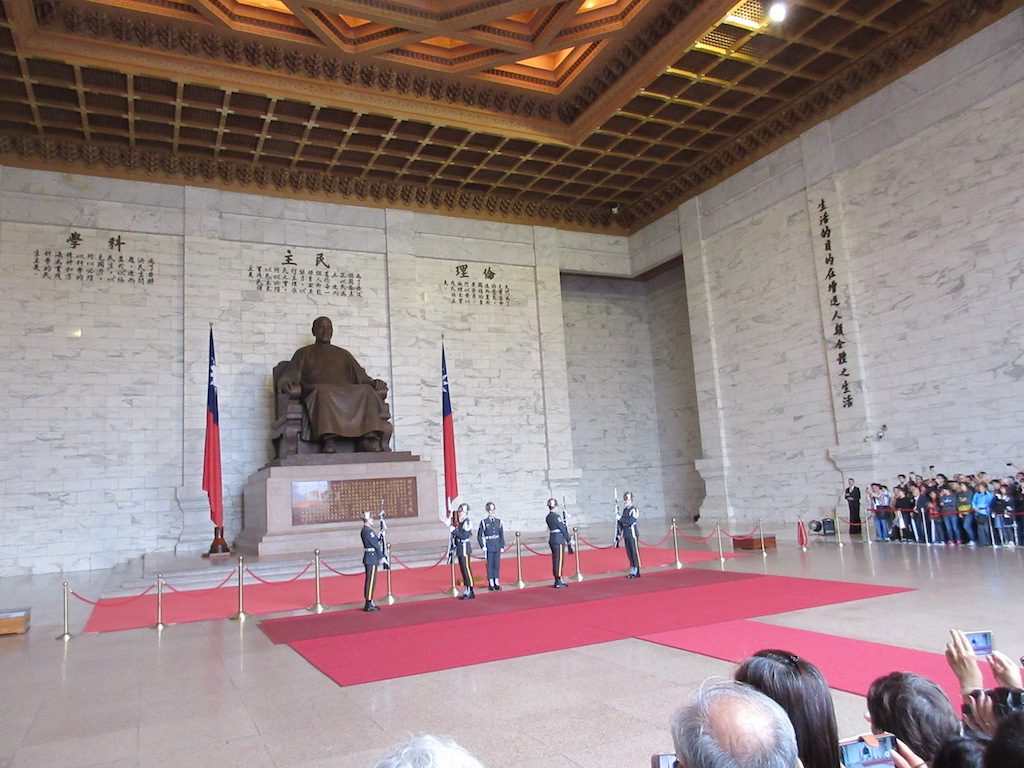 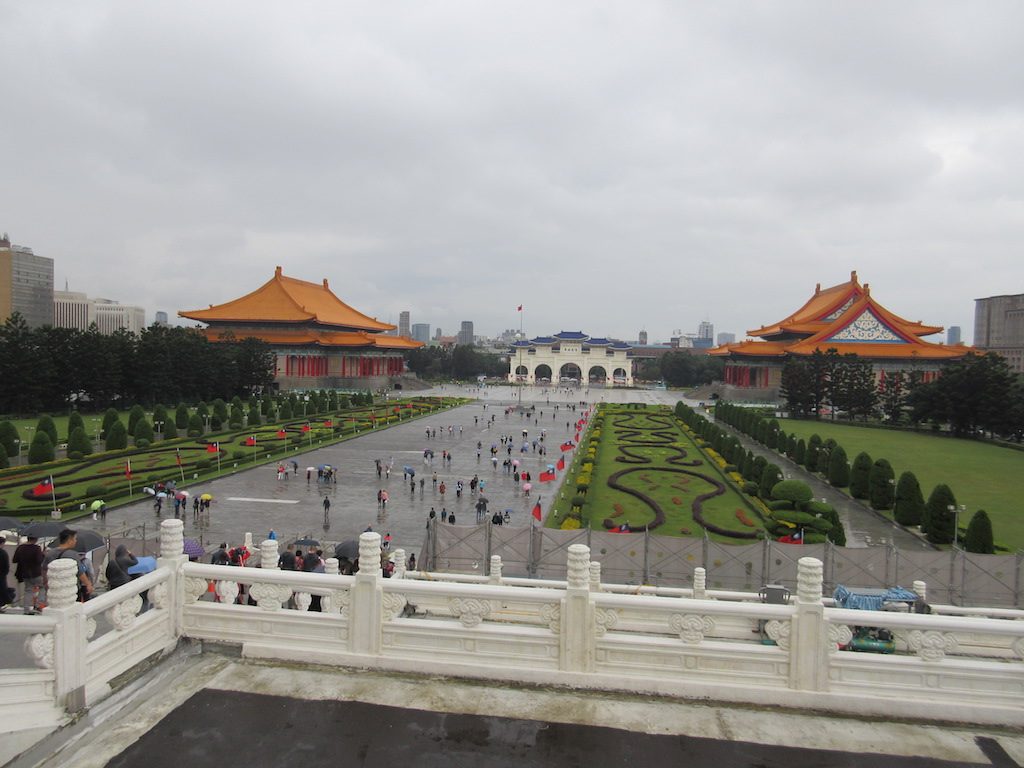 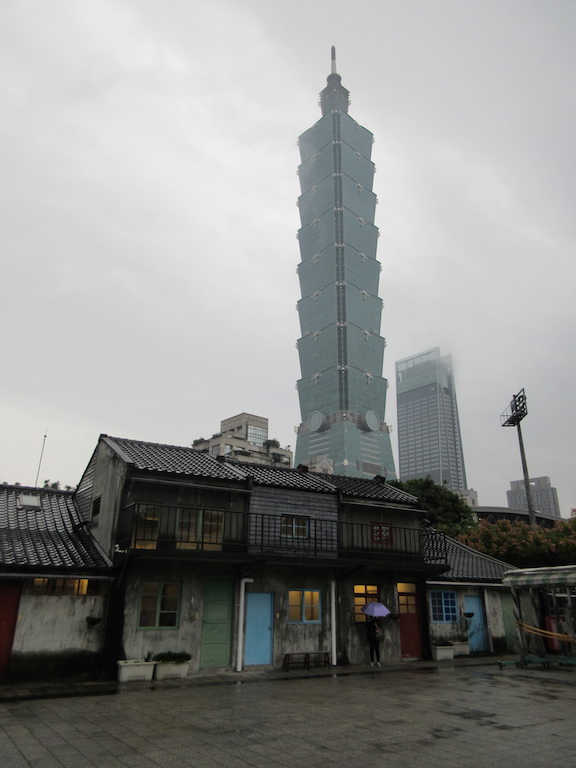 Our tour this day was a private tour that we took with our neighbors Ana Maria and Sandra. They had arranged for a van to pick us up at the port with a driver and guide to show us the best of Taipei. Our guide was Roger, a young man of 27 from Keelung, Taiwan, who guides as a second job. His regular job is a kitchen helper in a restaurant. The day was wet and rainy most of the day but it did not dampen our spirits of adventure.

Our journey commenced with a relaxing drive from Keelung City, Taiwan’s second-largest port, to the Dalongdong Bao-An Temple. This temple was originally built of wood at this site in 1742, followed by a more permanent structure begun in 1805 and completed in 1830. This temple is known for its huge scale, grand style and exquisite carvings. The temple includes an entrance hall, main hall, and back hall with guard rooms on the sides. Every inch of this temple is so detailed with finely carved wood, stone and ceramic materials. The most recent renovation of the temple came in 1995, and what a spectacular job they have done.

On the slopes of the Qing Mountain, our next stop was at the Revolutionary Martyrs’ Shrine, a stately monument constructed in 1969 to honor the 330,000 brave men who sacrificed their lives in key battles. Two of these battles were part of the revolution against the Republic of China and the War of Resistance against Japan. With a style reminiscent of Beijing’s Taihe Dian Imperial Palace, this stunning shrine is surrounded by more than eight acres of grass and features a bright red main gate guarded by uniformed officers. We were able to catch a simplified changing of the guards due to the rain.

We then headed to the palatial Grand Hotel, which was built in 1952 in the decadent style of classic Chinese architecture. The hotel was considered the finest hotel in the world by 1967. Ronald Reagan and Dwight D. Eisenhower both stayed here. The two-story lobby with a mega pot full of living lavender orchid plants was spectacular. Everyone who entered the hotel wanted to take their photos in front of this mega bouquet.

Our next stop was at the Lin An Tai Historical House and Museum. The family which had owned this home had become wealthy from the trade business and built this very large home beginning about 1785. The house is built in what they call the Fujian style incorporating courtyards, woods and gardens that are all about nature and shaped to embody the pristine elements. The home is quite large with many rooms situated on a large parcel of land with lakes, several out buildings, bridges and covered walk ways. Many of the rooms are furnished allowing you to see how the family might have lived here.

Back on the road, we headed through the bustling city of Taipei, where taxis, buses and motorcycles zip along the busy streets. Here we visited the wonderful National Palace Museum, with one of the largest collections of ancient Chinese objects and art in the world. Many objects were said to have been brought to Taipei by Chiang Kai-shek from Beijing. Spanning more than 8,000 years, the impressive collection includes bronze, paintings, jade, ceramics, and precious objects amassed by ancient emperors and more from the Sung, Yuan, Ming and Qing dynasties. The museum is very modern with all items marked in English and beautifully displayed. We spent about 90-minutes looking through three floors of priceless objects.

For lunch, we headed to a busy neighborhood in the city with many shops of local delicacies of food and a shopping district. We tasted pineapple cookies in a local bakery before sitting down in a noodle shop for beef noodles. Sandy and Ana had brought their peanut butter and jelly sandwiches and went shopping, so we ate while our guide watched us struggle with the noodles and chopsticks. Finally, he ordered forks for us. The noodles are handmade on the premises and are irregular in shape with a chewy texture. In the bowl of noodles were chunks of beef, leaves of spinach and bok choy and a beef stock. Along with the noodle soup we tried the onion pancakes. All was good.

Next, we headed to Chiang Kai-shek Memorial Hall — a regal monument paying tribute to the former President of Taiwan. With its brilliant blue glazed-tile roof, gold apex, white marble and natural red cypress ceiling, the shrine is designed to convey sacredness, solemnity, hospitality and peace. Inside, we saw valuable artifacts related to the late president’s life, including photographs, cars, a recreation of his office and historical documents. Upstairs in the main hall where there is an enormous statue of Chiang Kai-shek, we watched another changing of the guards. The solemn ceremony lasted about ten minutes.

Lastly, we headed to an old village museum from which we could look up at the exterior of the Taipei 101 Skyscraper built to resemble a stalk of bamboo tied with elegant ribbons at each fret.

All in all, it was a wonderful busy and tiring day in Taipei even with the poor weather (Kent’s legs were tired). The evening’s entertainment was a 24-year-old man by the name of Cy Leo, considered one of Hong Kong’s most promising harmonica players and song writers. His father was a champion harmonica player so he began playing at birth. His concert was the best received with the most applause of any show we have had so far this voyage. It is amazing the music he can create with such a simple and small instrument.