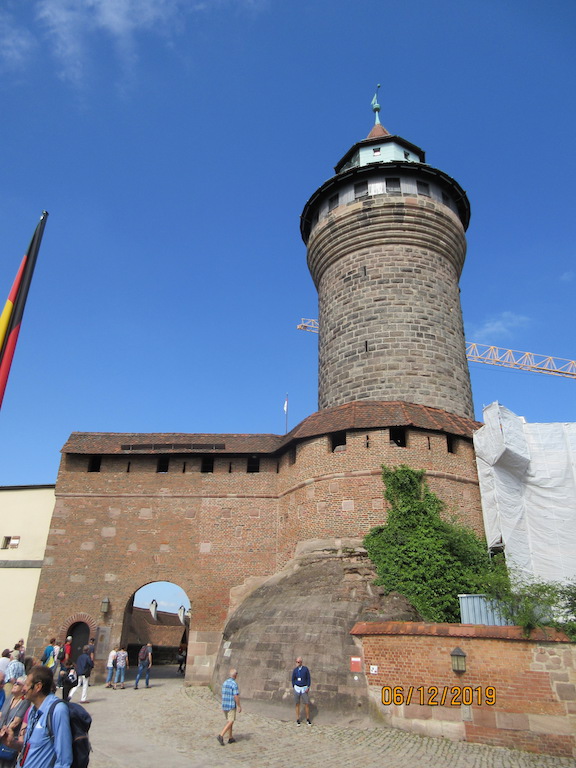 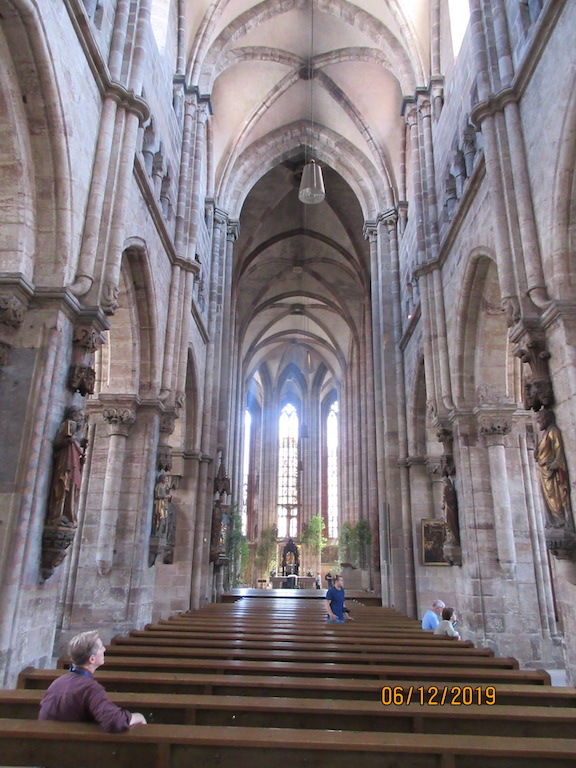 Nuremberg Fountain in the town square

We traveled the Main-Danube Canal, which connects the Danube and Main rivers, to get to Nuremberg. Nuremberg is a sizable city with a population of approximately 570,000 people. In 1806, Bavaria acquired control of Nuremberg, and in 1835 it became the final stop on the first German railroad. Today, Nuremberg is a beautiful, bustling city with the old mixing in with the new, but it also has a dark recent past: from 1933 to 1938 it was the site of annual conventions of the National Socialist German Workers (or Nazi) Party. It was at a 1935 meeting that the notorious Nuremberg Laws were put into effect, depriving German Jews of many civil rights. In 1945 and 1946, Nuremberg was the site of the Nuremberg Trials, the War Crimes Tribunal that tried Nazi leaders.

The city is known for its honey, toys, and spice cakes, and it was here that the first pocket watch in the world was made, as well as the first globe made by Mr. Behaim. Nuremberg was a great intellectual center of Europe in the 14th-16th centuries. It had the first railway in Germany, and it hosts the biggest toy fair in the world!

After a guided walking tour of the old town we visited a very large toy museum with over 14,000 square feet of vintage toys. Nuremberg was a famous manufacturing hub of all sorts of toys that were distributed around the world. They made everything from plastic toys to tin toys, train sets to board games, dolls to military figures. It was a very interesting museum.

For lunch we stopped at a local sausage restaurant to try the small finger-sized sausages that are famous in the area. They were served grilled, six, nine or twelve on a plate with mustard and potato salad. Also, on the tables were bread rolls and pretzels. The sausage was very good.

The main market square, known as Hauptmarkt is a large open space in the center of the old town where there were dozens of market stalls set up selling all sorts of fruits and vegetables, food items and sausages. We stopped to taste the local favorite sweet treat, gingerbread cookies. Ours were shaped in the round about four inches in diameter and tapered at the edges. They were very delicious although quite expensive (2.50 Euros each) by our standards.

Nuremberg is also the former home of the greatest Renaissance artist north of the Alps: Albrecht Dürer. He was a painter, printmaker and theorist of the German Renaissance. Durer established his reputation and influence across Europe when he was still in his twenties due to his high-quality wood prints. He lived from 1471 to 1528 and was in communication with arts greats like Raphael, Giovanni Bellini and Leonardo da Vinci.

After returning to the boat we attended a lecture on the Main-Danube Canal where we heard about the long history of connecting the Main and Danube rivers allowing for access from the Black Sea to the Mediterranean Sea. The canal supported trade and has only been completed since 1992. While they anticipated more commercial traffic, river cruises are the largest users of the canal.

Tonight, we had dinner with Frank and Mona, from Hawaii. They joined Ric, Kevin and us and shared some of their travel and life stories.