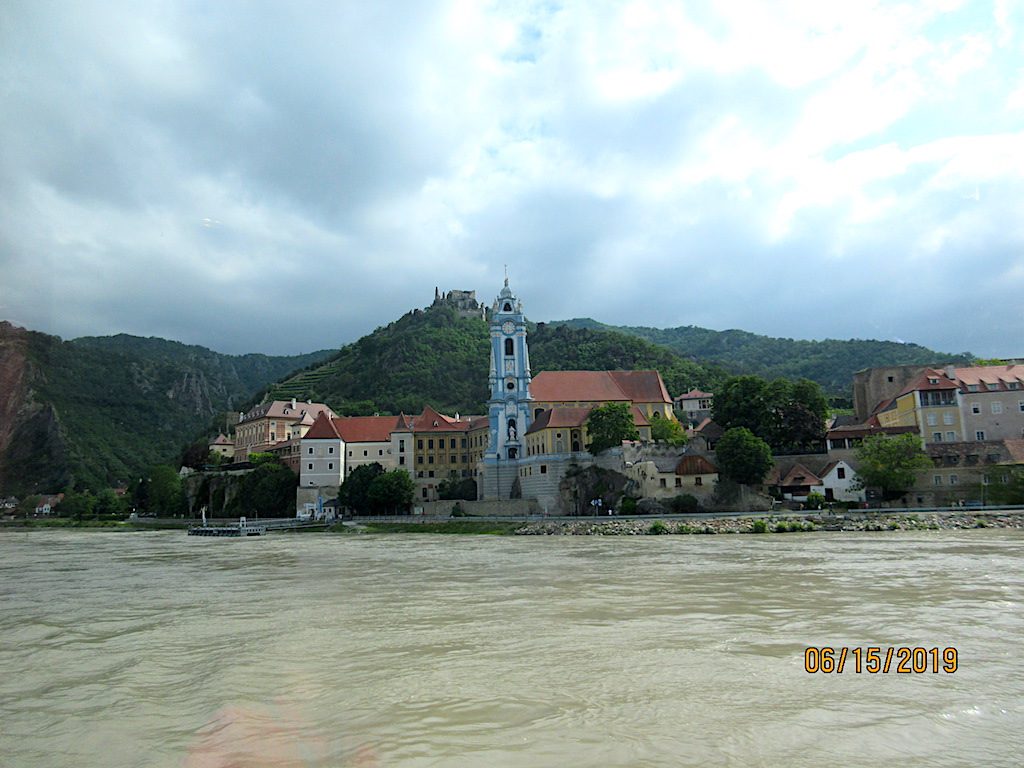 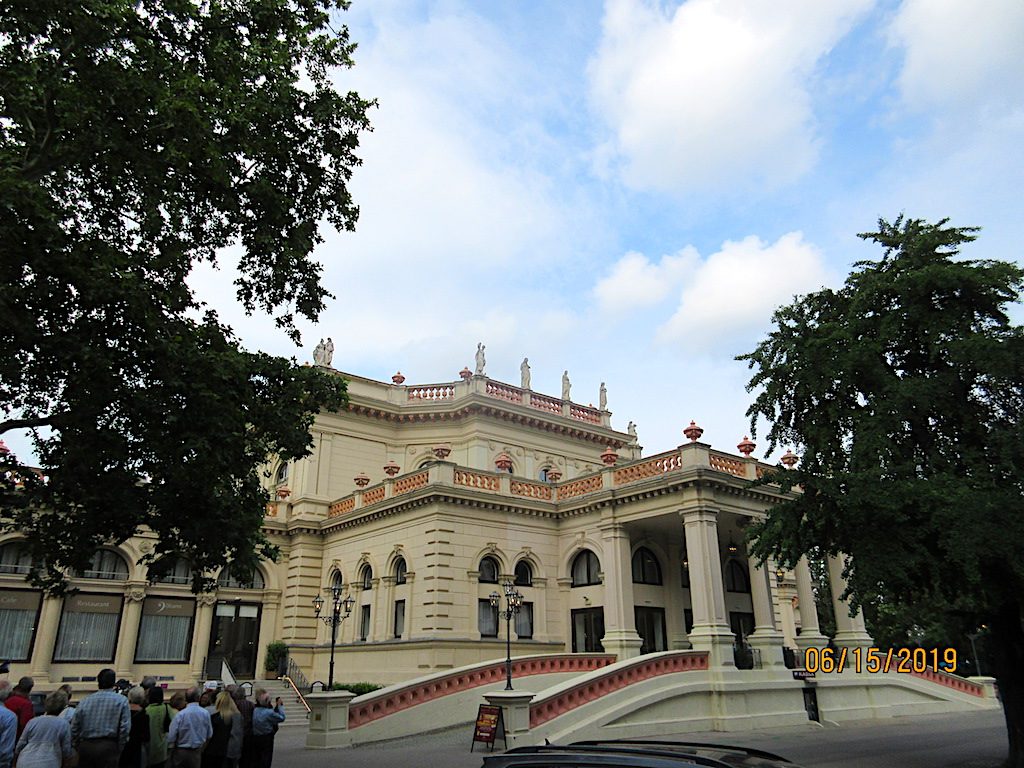 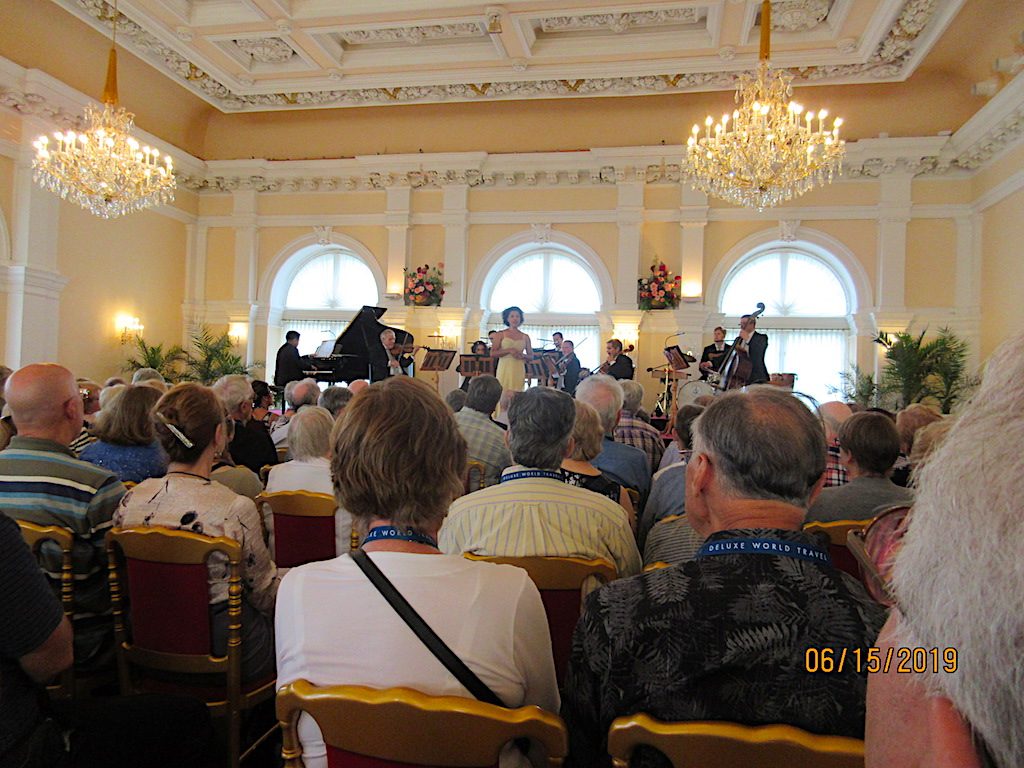 This morning we enjoyed scenic sailing along the Danube River through the Wachau Valley, a UNESCO World Heritage Landscape area. The Danube is 1,775 miles in length and the most important river in Europe. Once a long-standing frontier of the Roman Empire, today it flows through ten countries, more than any other river in the world. We sailed through many small towns and villages filled with beautiful little houses, churches and castles and forts perched on the hilltops and enjoyed the commentary provided by the cruise director.

We had a demonstration on apple strudel making by Executive Chef Ketut and Pastry Chef Laszlo. The Viennese made this dish famous with their delicate thin layers of pastry filled with tart apple filling, sometimes with nuts or raisins. The pastry is made with flour with high gluten content, little fat and no sugar. The pastry is rolled out and stretched very thinly to achieve an almost transparent composition. Purists say that it should be so thin that a newspaper can be read through it. After dinner they served the apple strudel for dessert.

The afternoon included an insightful lecture on musical Vienna in anticipation of our exclusive Mozart and Strauss concert at the Kursalon Music Hall. We took a short bus ride to the music hall where we had a glass of champagne before entering the music hall for the performance. Once inside the music hall we were treated to a nine-piece orchestra that performed a variety of Strauss and Mozart pieces. Some of the works were accompanied with an opera singer while others were accompanied with a dance couple. The entire performance lasted about an hour and was absolutely magical.

Back onboard the ship we shared dinner in the dining room with Ric and Kevin and three sisters traveling together. Two of the sisters are from Buffalo, New York while the other is from Los Angeles. They have been a lot of fun all cruise long. After dinner a local dance couple showed us their fancy footwork as they taught the guests some local dances like the Waltz.

Austria: Geography & Quick Facts
Austria is stunningly diverse for its size, from the glaciers and snow-capped peaks of the majestic Alps to the dense evergreen ecosystem of its Bohemian Forest. Landlocked by other countries (Italy, Switzerland, the Principality of Liechtenstein, Germany, the Czech Republic, Slovakia, Hungary and Slovenia) Austria nonetheless is defined in many ways by water: its heart is the Danube, which flows eastward, carving territory through granite cliffs and nourishing the soil of the terraced vineyards of the Wachau Valley. The climate, though generally mild and moderate in Vienna, varies from the cooler Alpine region to the warmer eastern plains.
Area: 32,377 square miles
Population: 8,332,000
Languages: German
Capital: Vienna
Ethnic groups: Germans, Turks, Serbs, Croats, Slovenes, and Bosnians are predominant, with Hungarian, Czech, Slovak, and Roma minorities.
Religions: Predominantly Catholic, with measurable Lutheran and Muslim populations.

Austria History: Though Austria is smaller than the state of Maine, it has played an outsized role in Europe’s political, cultural, and musical spheres. Its leaders have shaped empires. Elegant cityscapes have graced canvases and the silver screen. And lovers of Strauss have danced all night to the lilting tempo of the waltz.

Austria first declared itself an independent Bavarian kingdom in AD 976, it will forever be associated with rulers who would not appear for another 300 years: the mighty Habsburgs, a dynasty that ruled for 750 years and led Austria to its greatest years of glory. Crafting an empire, the Habsburgs added regions in Spain, the Netherlands, and as far away as Africa to their territory. Holding off the Ottomans and eventually helping defeat Napoleon, Austria established itself as a force to be reckoned with. The wealth of this stunning empire can be seen today in such architectural masterpieces as the 1,400-room Schonbrunn Palace and the elegant palaces and civic buildings along Vienna’s famed Ringstrasse.

Even among the countless powerful Habsburgs, one liege stands out. Franz Josef I, crowned in 1848, ruled for nearly 70 years, a reign which included the establishment of a tandem monarchy with Hungary. While he survived assassination attempts and political in-fighting, cities like Vienna (which became the musical center of the West) blossomed and he remained popular with the general citizenry for the stability he maintained. But he will forever be linked to the tragic events which ended his career and life: upon the assassination of his nephew Franz Ferdinand, Franz Josef declared war on Serbia, setting in the motion the chain of events that became World War I. By its end, not only would the emperor be dead, but the power of the Habsburgs diminished, his family’s rule over Austria forever ended.

While in some parts of the world, the end to one-family rule has occasioned the blossoming of democracy, such was not the case in Austria, where the next 15 years saw an unchecked rise in paramilitary activity and an increasingly authoritarian government so despised by the populace that many cheered on the nation’s annexation by Nazi Germany in 1938. Not all citizens welcomed this alliance, as many Americans recall from The Sound of Music, which showed the love of homeland that caused Captain Von Trapp and his family to flee Austria.

The ensuing terrible events—including the Holocaust—proved the Von Trapps right, and the end of World War II brought no immediate relief, as Austria was kept under occupation by Allied Forces – with many of its manufacturing resources and utilities under Soviet control – for more than a decade. Divided into four sectors administered by British, U.S., French, and Soviet forces (with a central “international” zone), Vienna became synonymous with post-war intrigue, captured in The Third Man, the 1949 film written by Graham Greene and starring Orson Welles. It was not until 1955 that Austria became fully free and independent once again.

The world was reintroduced to the Alpine charms and cultural richness of Austria when the 1964 Olympics were held in Tyrolean Innsbruck. By the time the Olympics returned to Innsbruck in 1976, The Sound of Music had caught the fancy of many Americans with its use of lovely Linz. Austria seemed to show up everywhere in popular culture, from Mozart’s Vienna in Amadeus to the mysterious Melk Abbey in The Name of the Rose. Travelers flocked to Austria, following the banks of the Danube as their route to discovery.

In these post-war decades, the government was led by democratically elected officials working together as coalitions of members from multiple parties. The economy, premised on both capitalist elements and social market values, boomed, and Austrians enjoyed a high standard of living as a result. Though worldwide economic downturns have affected Austria as well, its recession lasted a relatively short period compared to its neighbors, and Austria proudly boasts the lowest unemployment rate of any state in the European Union. From the Rococo palaces of its past to the cosmopolitan cities of its present, Austria once again shines like the crown jewel of Central Europe.