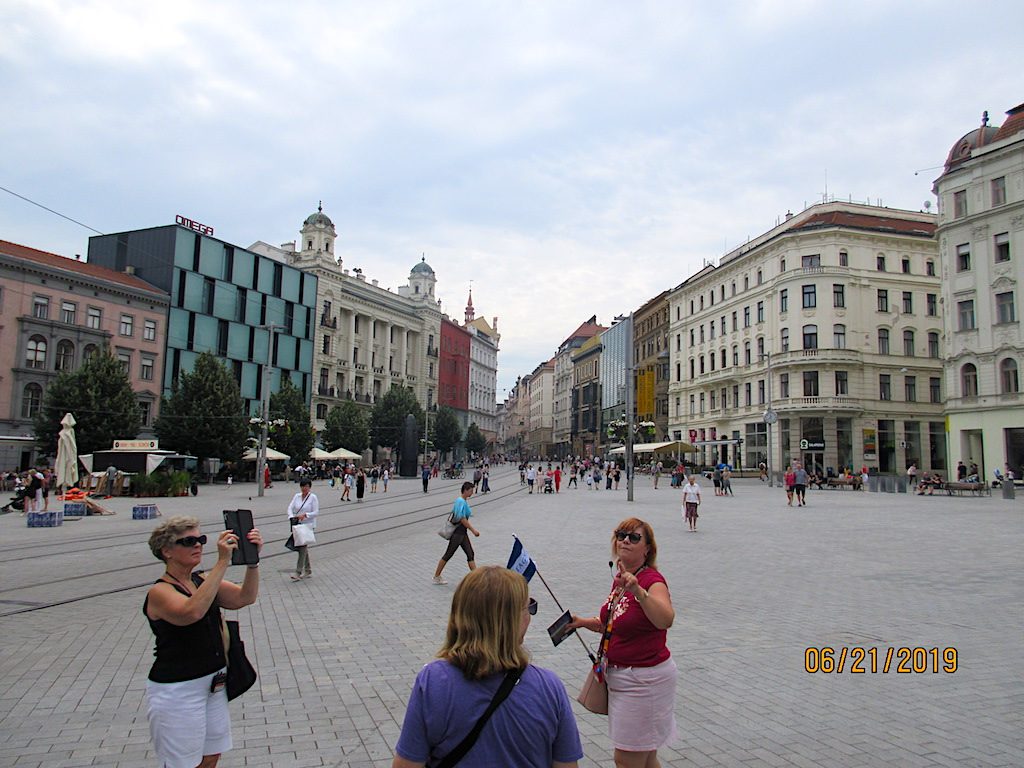 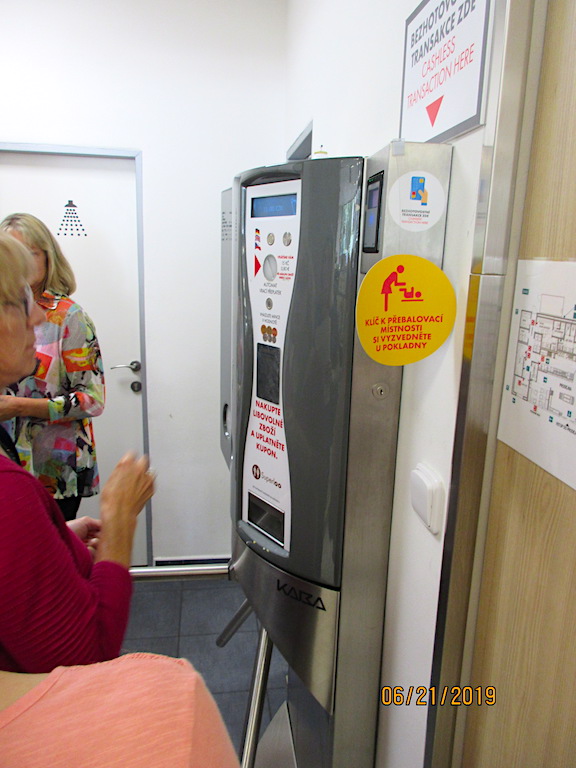 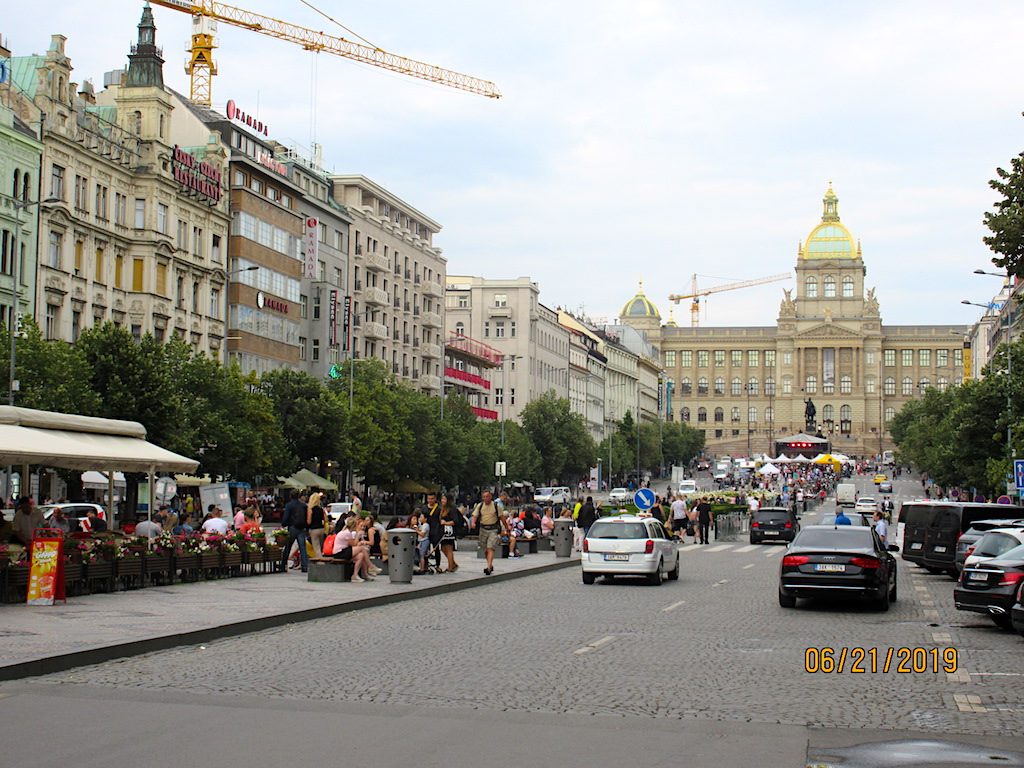 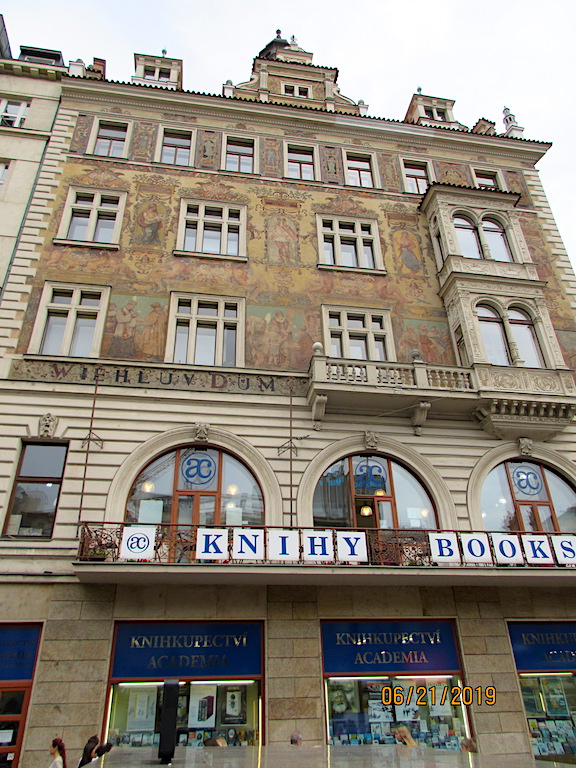 This morning we travelled from Bratislava to Prague, stopping in the thousand-year-old town of Brno, Czech Republic, where we had a brief walking tour. Brno is the second largest city in the Czech Republic, a university town and it is known for its modernist buildings. The gothic cathedral of St. Peter and Paul built in 1891 sits high atop the town’s highest peak. We stopped for a bite of lunch on our own in Brno before continuing on to Prague.

The bus ride from Bratislava to Brno took us only about 90 minutes to reach. From Brno to Prague the ride was about three hours. Along the way we stopped at a roadside service station and convenience store to use the toilets. At the stop they had pay toilets where you had to enter coins equal to about 75 cents into a machine that would then allow you to pass the turnstile.

Our hotel for the next three nights is the art deco-styled historic hotel called the Alcron. Originally designed and owned by Alois Krofta, the Alcron Hotel was built in 1929, completed in 1930 and opened for business by 1932. The hotel was the only luxury hotel in Prague and has been host to many celebrities, athletes and political figures since its opening. The hotel is centrally located near the Old Town Square, Charles Bridge and Prague Castle.

Our city guide, Martina, took us on a short walk of the immediate area around our hotel to familiarize us with the area. We walked around the very busy Wenceslas Square filled with shops, outdoor dining spots and a stage with live entertainment. There were many tourists as well as locals out for a Saturday night. We stopped at a local restaurant with miniature train tracks running around the restaurant stopping at each table to deliver the drinks. We had pulled pork and French fries before returning to our hotel for the night.

Czech Republic: Geography & Quick Facts
Across its two main regions—Moravia in the east and Bohemia in the west—the landscapes of the Czech Republic vary from broad plateaus to rolling hills to mountains. Though nourished by many rivers (including the Elbe) which have allowed several port cities to thrive, the Czech Republic is entirely landlocked, bordered by Germany, Austria, Slovakia, and Poland. Its very earth is among its greatest treasures, with coal, clay, and graphite among its chief resources.
Area: 30,449 square miles
Population: 10.5 million
Languages: Czech
Capital: Prague
Ethnic groups: More than 90% Czech with smaller Slovak, Roma, Silesian, Polish, German, Ukrainian, and Vietnamese populations
Religions: Roman Catholic, Protestant

Czech Republic History: From the ninth century onward, the region where the Czech Republic today lies was known as the Lands of the Crown of Bohemia. At times a fiefdom of the Holy Roman Empire and then increasingly controlled by the Germans, the nation experienced its Golden Age under the 14th-century rule of Charles IV, who freed the Bohemian Kingdom. After being crowned Emperor, Charles set about transforming Prague, already booming, into a true imperial city. Because Prague was spared the devastation of other European cities through the ages, much of his glorious city can still be seen today, from the royal castle to universities to the “New Town” (named around 1400 AD) district.

The dawn of the 15th century led to changes of another kind: the birth of the Hussite religious movement, challenging the papacy (and thus falling within the scope of the Protestant Reformation). This movement became a pro-Czech/anti-German flashpoint for the nation, with repercussions from the university to politics, with theologian Jan Hus’s supporters seen as rebuking the past influence of Germany on Czech affairs and policies. But when Hus eventually defied the King as well, Hus was expelled, then arrested, and burned at the stake as a heretic. Even as these inter-denominational conflicts played out, the Kingdom of Bohemia still enjoyed autonomy until the 1620 Battle of White Mountain, when the Habsburgs defeated the Czechs and the nation entered a 300-year period of Austrian rule.

After World War I, the Czech and Slovak people emerged from their long subjugation to form the United Nation of Czechoslovakia. Despite speaking separate languages and having distinct cultures, this seemed a dramatic improvement over Habsburg rule. But autonomy did not assure control. Despite maintaining a parliamentary democracy for the next 20 years, Czechoslovakia was not strong enough to resist a pre-war pact made by Germany, France, and England that required the nation to give up part of its territory—the largely German populated Sudetenland—to the Nazis.

The pact emboldened Germany, which soon marched into the remaining Czech lands. But when World War II ended, the shoe was on the other foot, and nearly three million Germans were forcibly expelled from Czechoslovakia. Once the smoke of war had died away, a remarkable thing was revealed: unlike many of Europe’s great cities, Prague and its “1,000 spires” had survived nearly perfectly preserved. The castle district, with its palaces, churches, galleries and the largest ancient castle on earth, remained impressively intact–a true treasure.

For a brief time, Czechoslovakia’s democratic leadership envisioned the nation as a bridge between the West and the newly hardening Eastern Bloc. But the Communist take-over of 1948 ended that dream, and strict party orthodoxy ruled for a time. Twenty years later, members of Czechoslovakia’s Communist party angled for liberal reforms, installing a Slovak as party head, while taking first steps toward social, economic, and political progress, in hopes of what the leadership called “socialism with a human face.” It was not to be. Soviet tanks rolled in, occupying Czechoslovakia, and crushing opposition for another two decades.

In 1989, when Communist police used deadly force to quell a peaceful pro-democracy rally, the citizenry came together to demand change. The Czech Civic Forum and group known as the Slovak Public Against Violence united millions behind regime change. Facing a sudden near-complete loss of membership, the Communists stepped down and dissident playwright Vaclav Havel became the new president in what became known as the Velvet Revolution. A full 95% of the population voted in the subsequent parliamentary elections, demonstrating their eagerness to move forward. That was nearly the last thing they agreed on: soon, with liberation the subject of the day, the Slovak people wanted their own state, and by 1993, they had one.

Since that day, the Czech people have been citizens of truly their own land: the Czech Republic. Prague has become an international arts hub and a magnet for travelers seeking the best of historic monuments and modern sophistication, making the Czech Republic one of Europe’s most visited destinations.