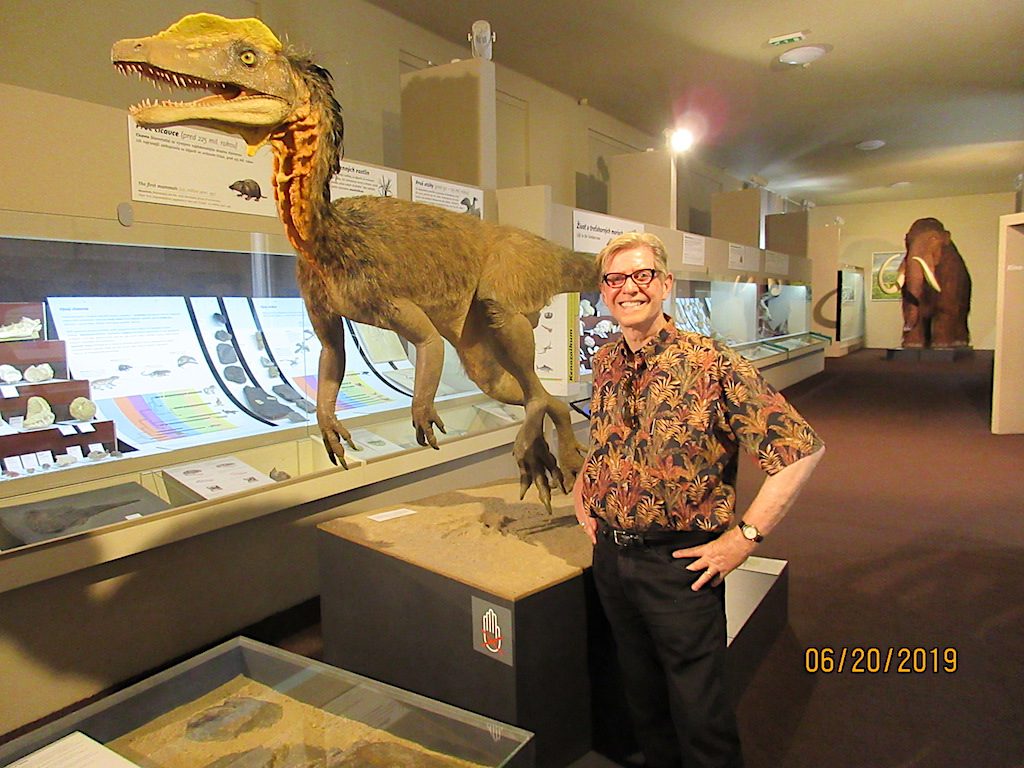 Kent and his new friend at the Slovak National Museum 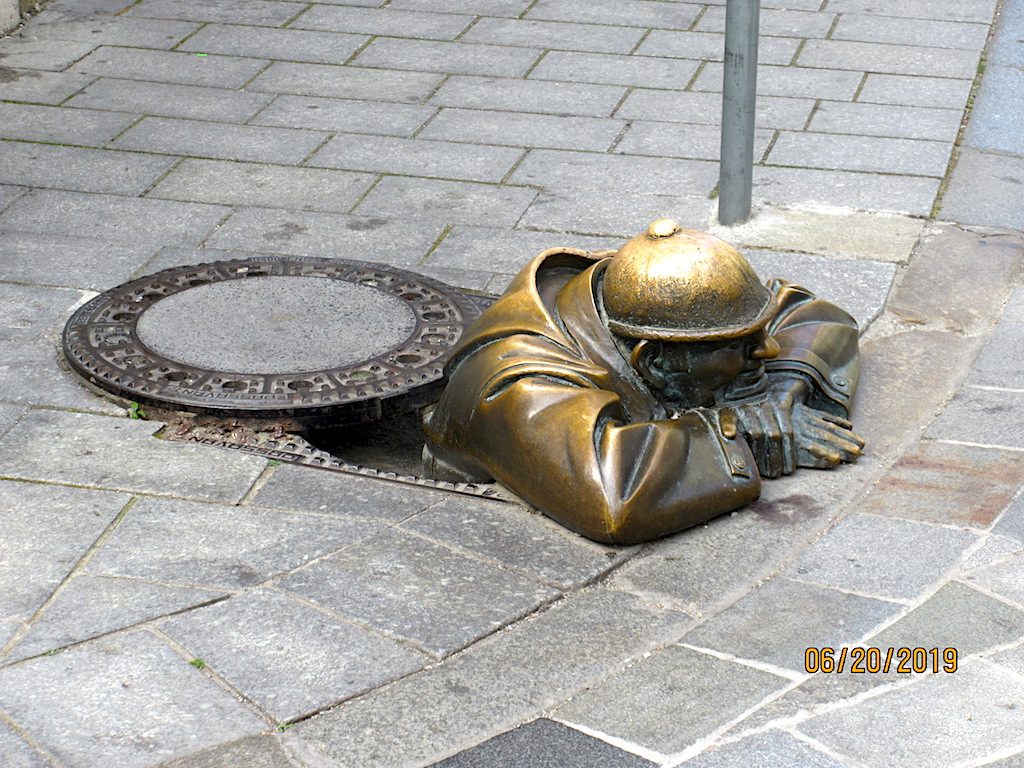 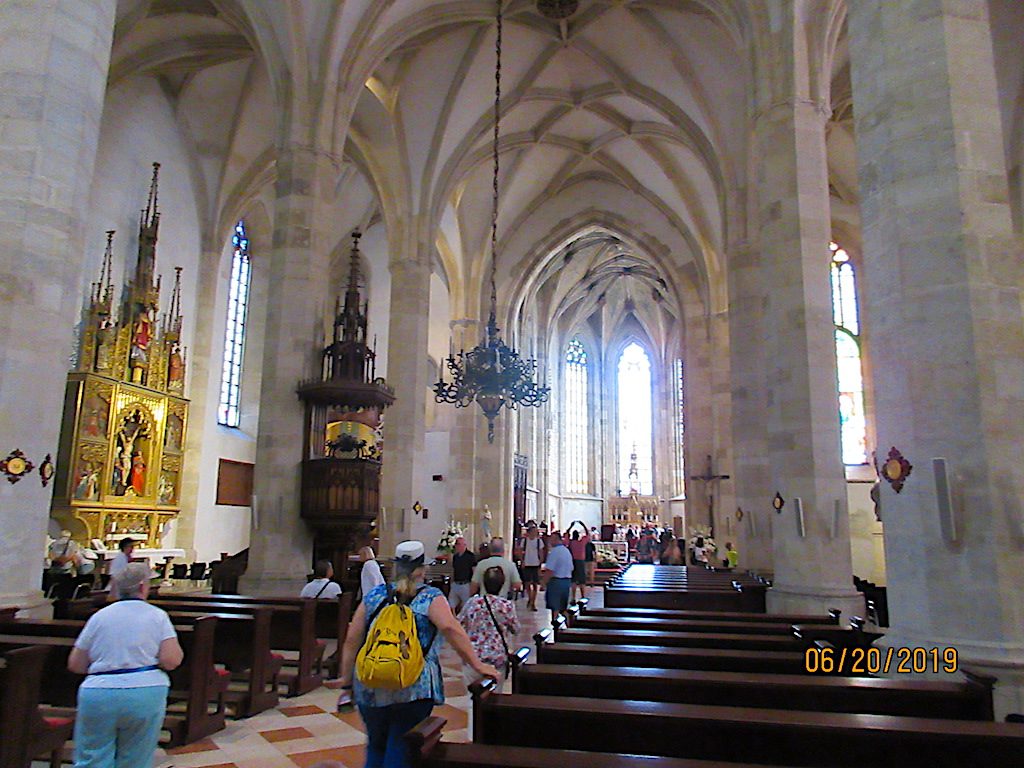 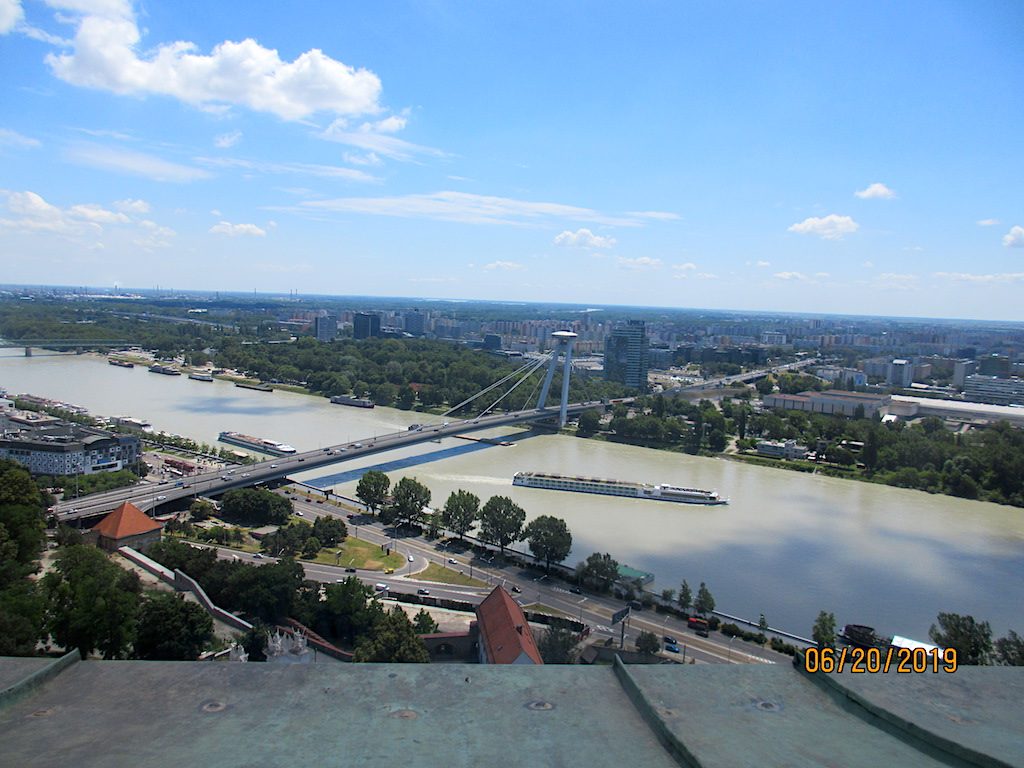 View of the Danube River from the Bratislava Castle Tower 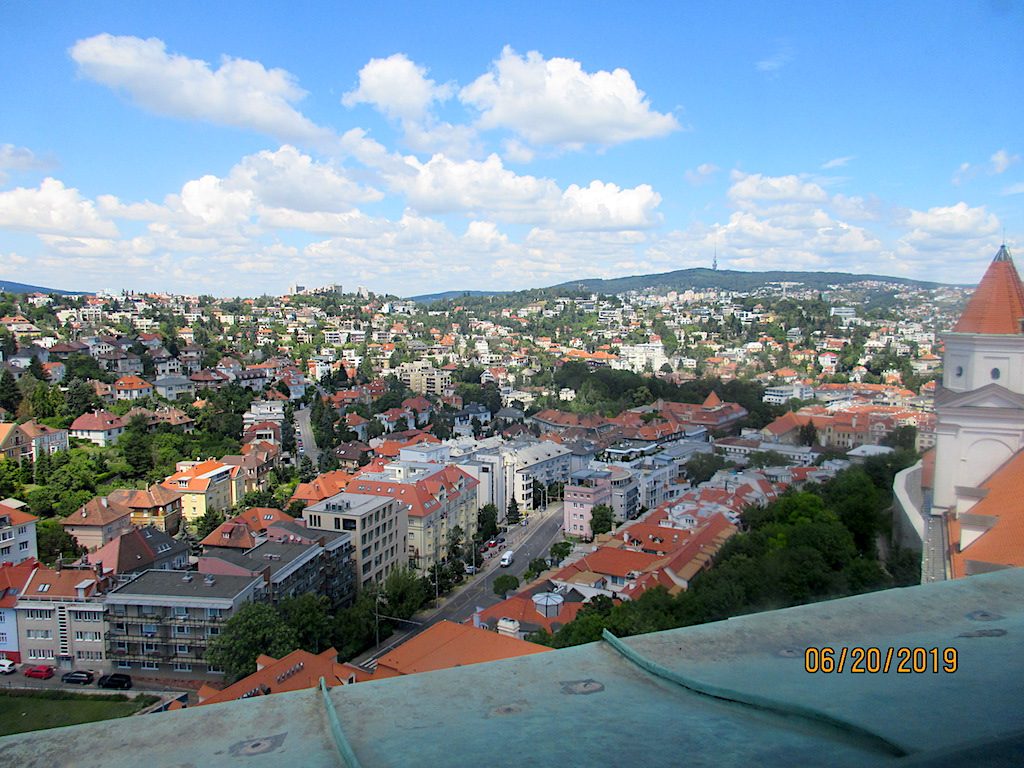 Bratislava Castle View from the Tower

We started the day off with a short train ride (think bus shaped like a train) from our hotel to the old town to begin our walking tour of Bratislava led by a local city guide named Peter. Once in the old town we walked through the historic streets getting some of the history of the places and buildings we were seeing. We took a peek inside the ornate St. Martin’s Cathedral.

After our two-hour walking tour, we took the train up to the re-built Bratisalva Castle for a look inside and out. Inside the recently reconstructed castle we found several floors of exhibits of local glass manufacturing to famous local artists’ paintings. Outside the formal gardens have been reconstructed as recently as 2016 and restoration work continues on the castle grounds.

After our tour of the castle we headed back to the old town area where we had lunch at a local sidewalk café. Our next stop was the Slovak National Museum where we explored exhibits about a local architect works to women’s head covers through the ages in the region. They have an extensive exhibit on animals from bugs to giraffe and have a lot of nice panorama’s showing off the taxidermy animals. The museum is located in a historic old building although it could use some renovations and updating including installing air conditioning.

One of Eastern Europe’s great “hidden gems,” the ancient capital of Bratislava has a lovely array of baroque palaces, graceful fountains, and narrow streets. In fact, many who visit the city today compare it to Prague and Budapest. Already a large trading city in the twelfth century, Bratislava is located on both sides of the Danube upstream from Budapest, and served as Hungary’s capital for 300 years, until 1830. During that time, eighteen Hungarian monarchs, eleven kings, and seven queens, were coronated at St. Martin’s Cathedral. The composer Franz Liszt was a frequent visitor, and Napoleon and Emperor Franz I of Austria met at the Primate’s Palace in 1805 to sign a peace treaty. The city was part of Czechoslovakia until that country split into Slovakia and Czech Republic.

Bratislava Castle, occupying a spur that sweeps down to the Danube, is a walled fortress that has undergone many reconstructions since its construction in the tenth century. The fairly compact old city center features a superb collection of baroque palaces, as well as numerous landmarks of Hungarian influence. Bratislava is also noted for its excellent museums. Along the river, the Slovak National Museum features the anthropology, archeology, and natural history of the region. The Slovak National Gallery contains an impressive art collection. Other museums are dedicated to such subjects as wine production, folk music, and Jewish culture.

The afternoon included free time to explore on our own or to take an optional tour to the Cerveny Kamen Castle located about an hour’s drive away. The castle dates from the 16thcentury and was designed by the Thurzo family primarily as a home with a large and defensible built-in storage area for valuable goods. Unfortunately, due to the cost to build the castle it was soon sold to another aristocratic family called Palffys. It was frequently restored over the centuries and today houses a remarkable exhibition of furniture in its many furnished rooms. The museum specializes in the development of the culture and nobility in Slovakia.

Since we had a late and filling lunch we decided that we would venture a few doors from our hotel to the Massimo Italian Restaurant for dessert and coffee. In honor of Kevin’s birthday, we had a delicious Tiramisu and a chocolate soufflé with a berry sorbet. Both were excellent!