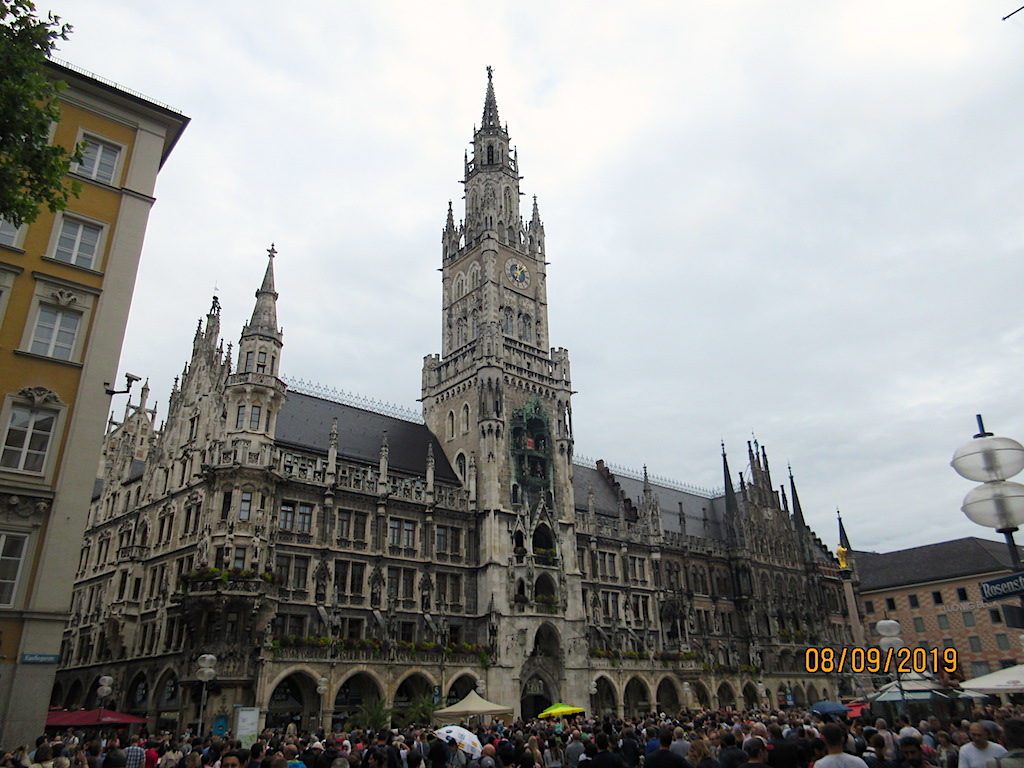 City Hall and the Glockenspiel 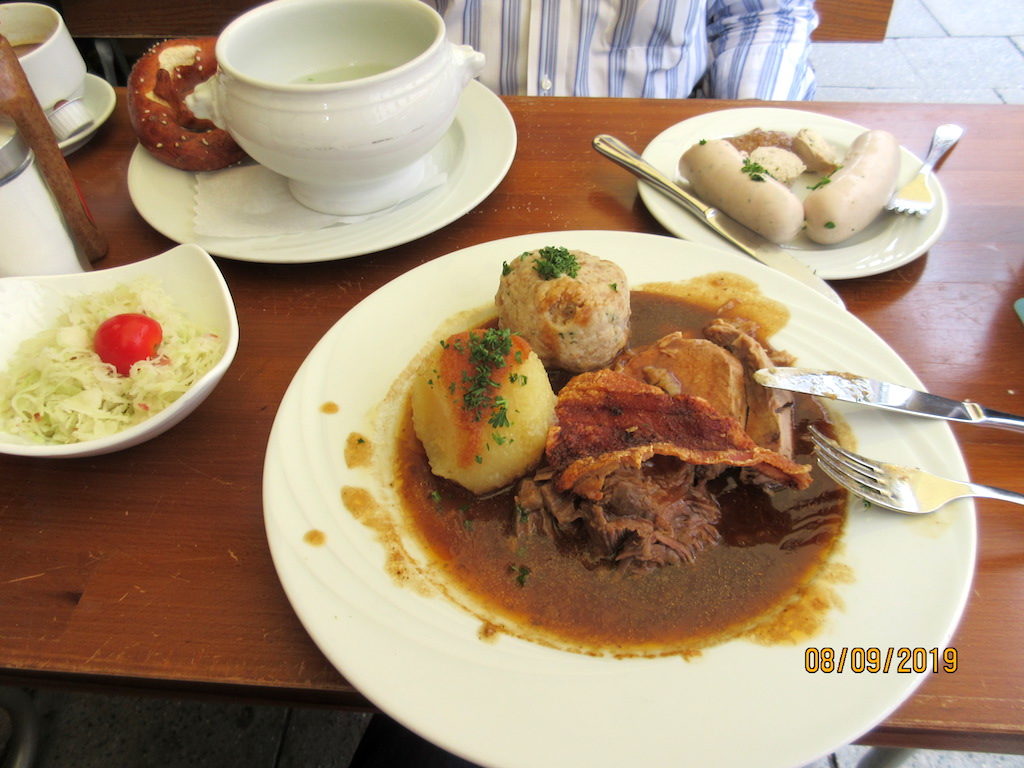 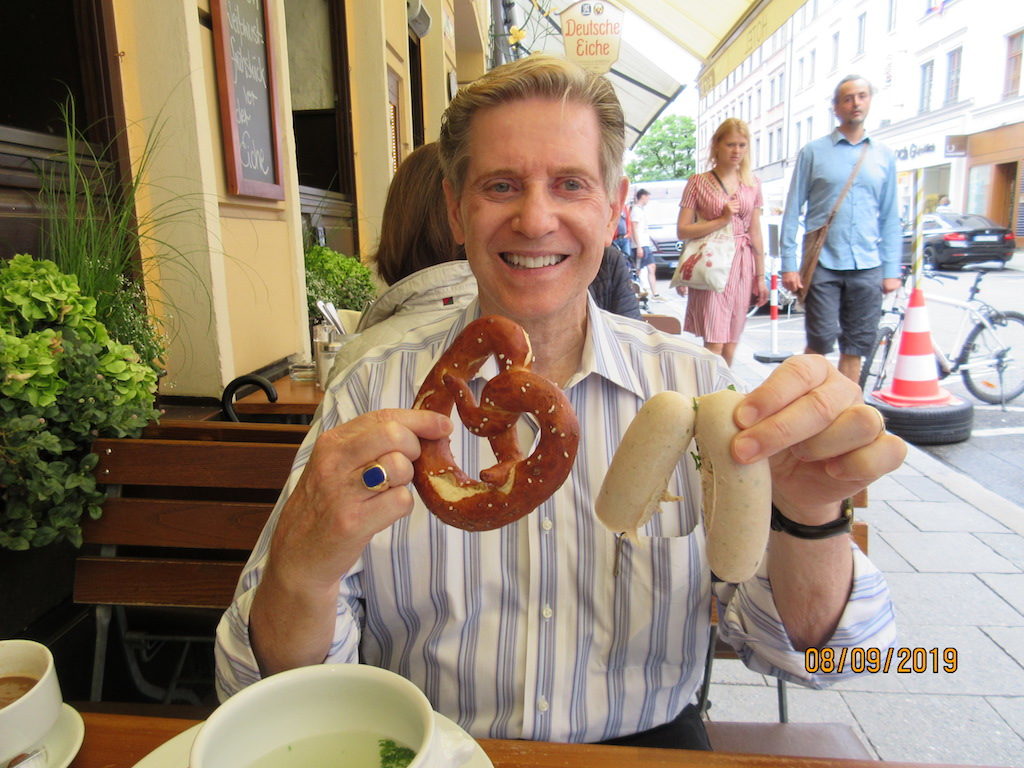 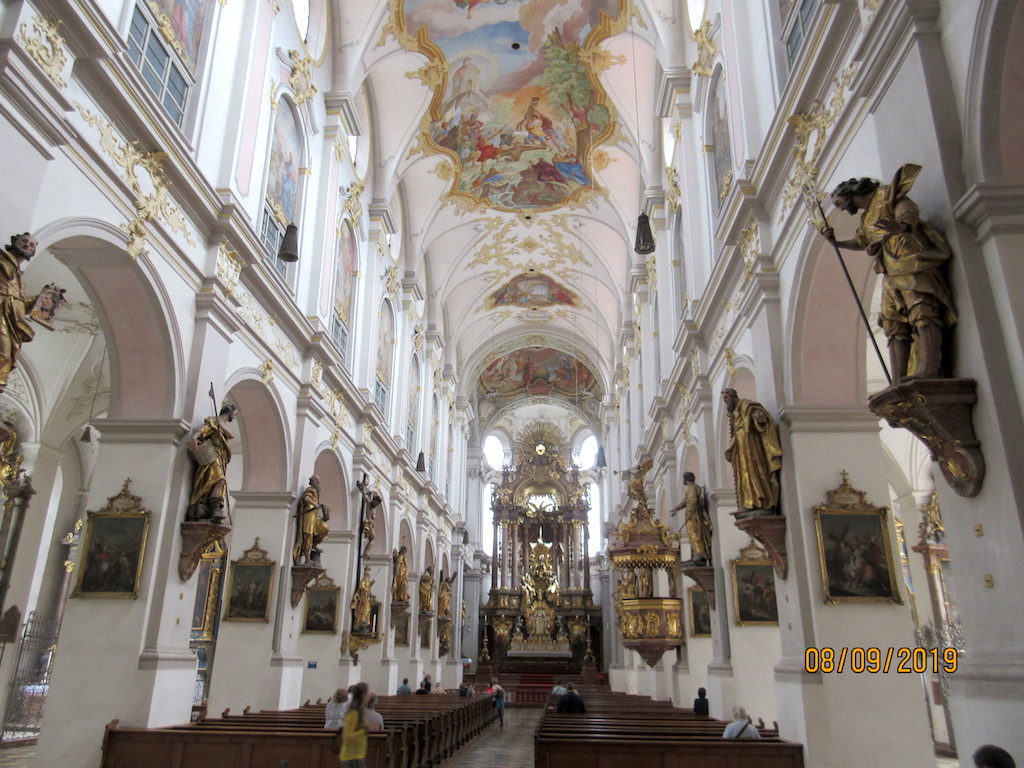 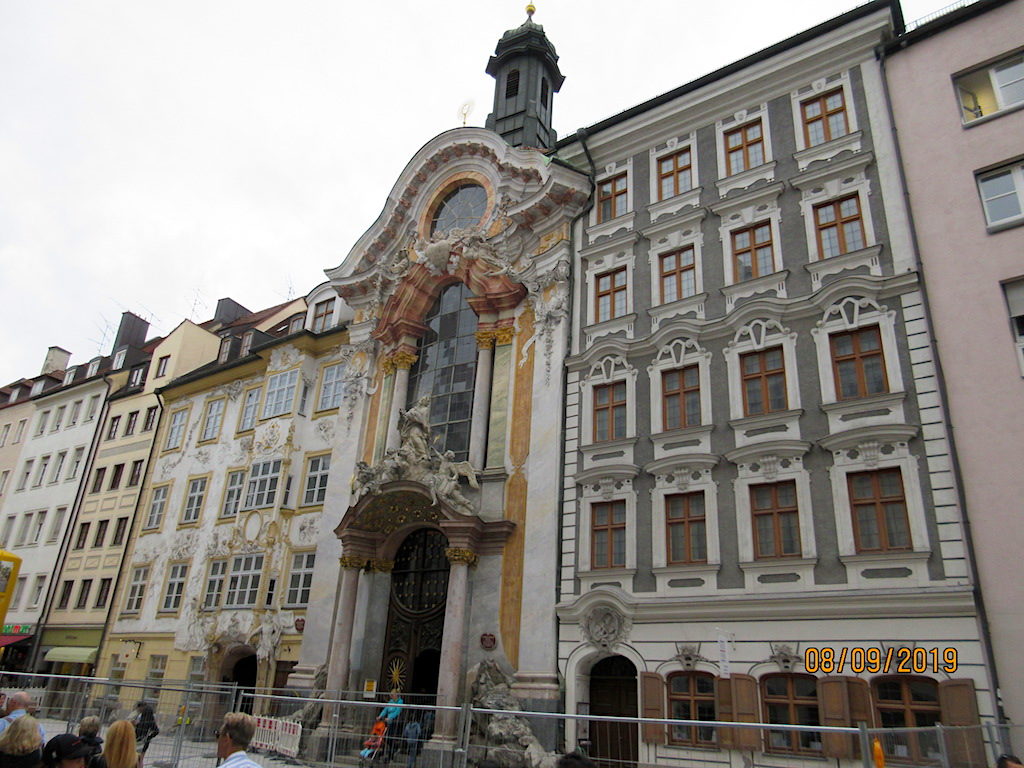 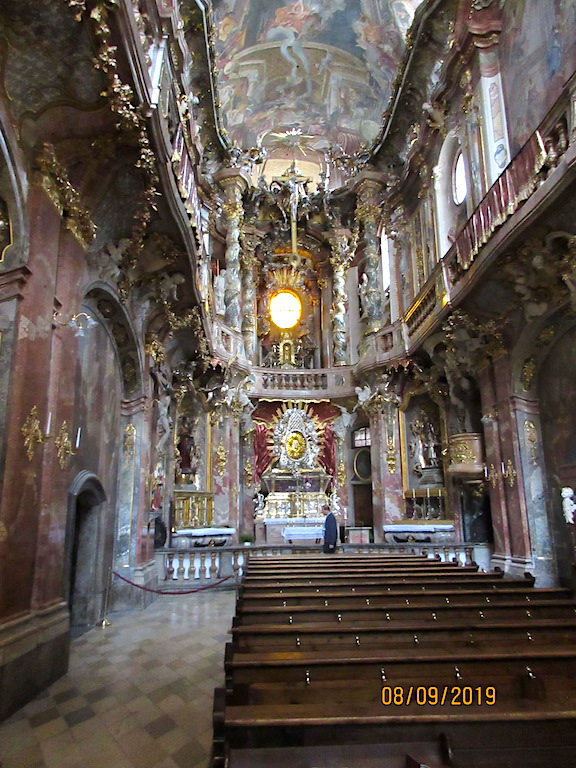 We had another restless night, still adjusting to the time change of nine hours from home. After a morning of mostly light rain it dried out and we ventured out to the Marienplatz to catch the Glockenspiel clock performance. The Marienplatz is the main town square housing the city hall. The ornate City Hall building includes the Glockenspiel in its tower.

We then visited St Peter’s Church before stopping at the Deutsche Eiche (German Oak) Hotel and Restaurant for lunch. The hotel is one of the most historical meeting places in the Munich art scene and gay village. The hotel consists of 32 rooms, has a restaurant, roof top deck and bathhouse. For lunch, Mark tried the roast pork with dark beer sauce topped with pork rind, a potato dumpling, a bread dumpling and the bacon cabbage salad. Kent enjoyed 2 Munich sausages with sweet mustard and a pretzel. The sausages were short, fat and white in color while the mustard was sweet and delicious.

Our next stop was at one of the most ornately decorated churches in the city of Munich called St. Johann Nepomuk or better known as the Asam Church. The church was built from 1733 to 1746 by brothers, Egid Quirin Asam, a sculptor, and Cosmas Damian Asan, a painter, as their private church. The church is small in size measuring only about 75 feet by 25 feet. It is extremely gaudy with ornamentation everywhere. We were not allowed to access the church as there is a wrought iron gate not far inside the church that you can only look through. Even so, it was quite a site to see.

In the afternoon our friends Alain and Matthias from Stuttgart arrived at our hotel. We headed out to a street fair where they had beer and food stands out in the street and folks gathered to have drinks with friends in the street. As it was raining lightly, we decided to stop in at a local café where Matthias and Alain had a lunch snack and we had coffees and a piece of cake. Afterwards we walked back to our hotel for a short rest before heading out to dinner.

We met Alain and Matthias on the World Cruise on Holland America Lines in 2013. We visited them in Stuttgart in June, 2013. Next, we met them in Paris in October of 2015; Lucerne, Switzerland, in October, 2016; and London in May, 2018. It is wonderful to be able to catch up with these fellow travelers whenever we can.

For dinner the four of us headed to the Viktualienmarkt in the center of Munich which is a daily food market. It features about 140 stalls and shops offering flowers, exotic fruits, game, poultry, spices, cheese, fish, juices and more. Here we dined at the Laurin Restaurant on a charming and pleasant outdoor patio. When we arrived, Kent spotted our friends and program managers, Kent and Christine Zimmerman, for our upcoming trip to Bolzano, Italy.

For dinner Alain, Matthias and Mark enjoyed an excellent veal schnitzel with a cranberry preserve and potato salad. Kent had the cheese plate with a variety of cheeses, nuts, grapes and crispy dark bread, along with regular sliced bread and butter. It was a very nice dinner and we enjoyed catching up with Matthias and Alain.