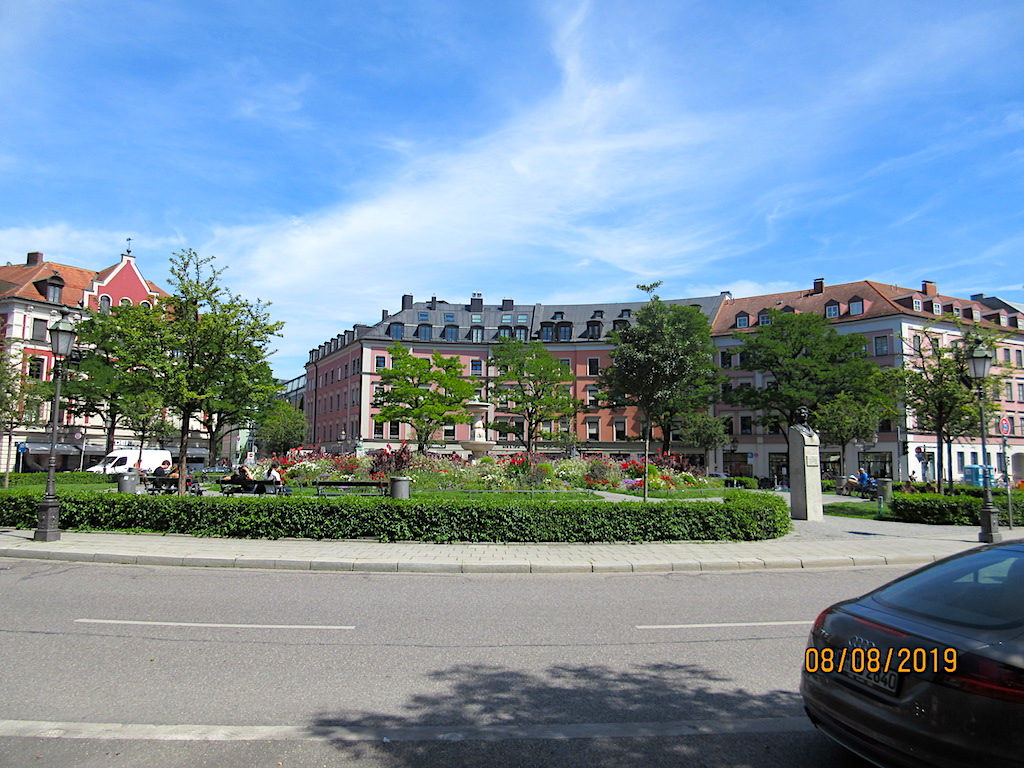 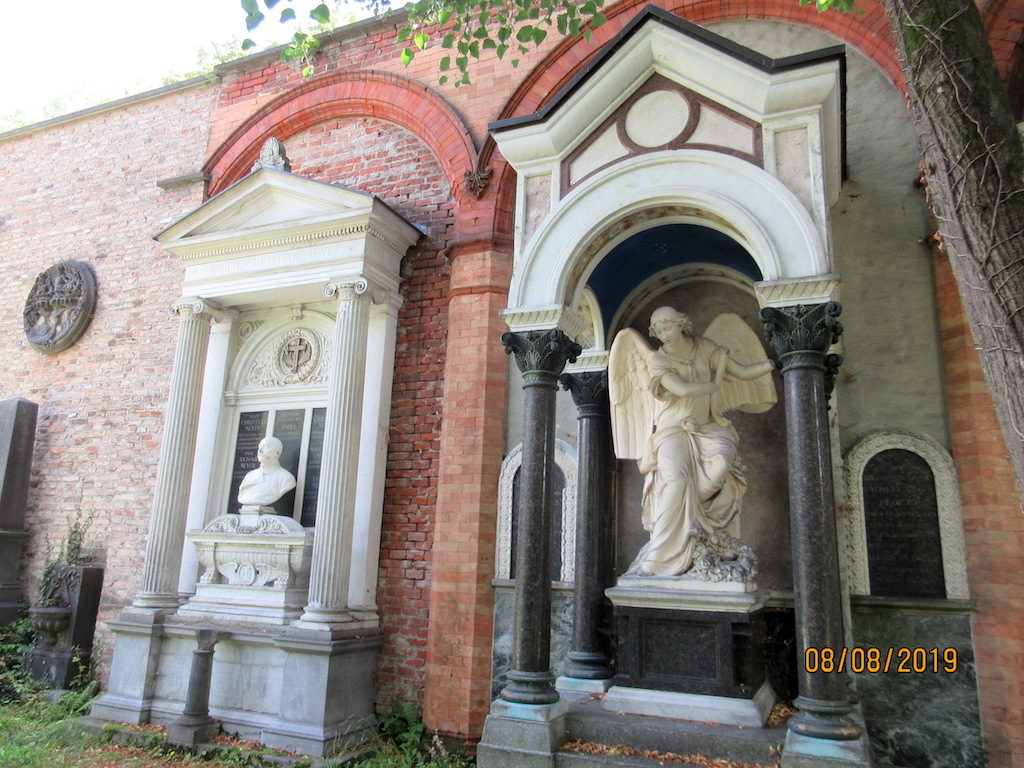 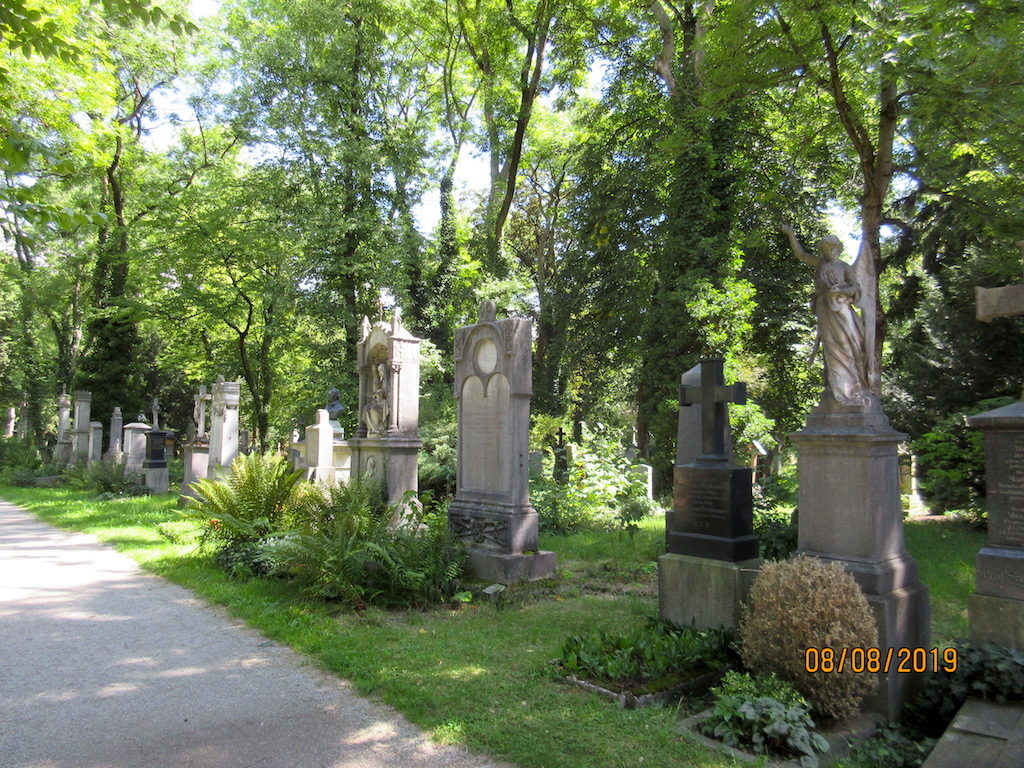 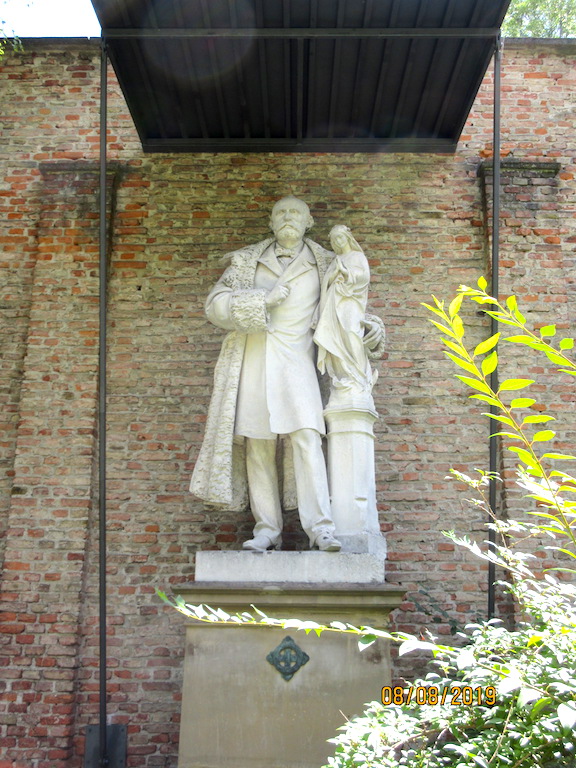 On this day we set out on foot to an area called the Gartnerplatz, formerly the main square of the gay and lesbian scene in Munich. Today the area is one of the trendiest in Munich and is filled with many cafes, bars, hair salons, clothing boutiques and small unique shops. You don’t see any name brand stores that you see around the world in this neighborhood. There was not a lot of evidence of a gay community here….perhaps we were too late.

At a local café on the main circular plaza we had coffees and a croissant filled with what they call nougat, a creamed filling with hazelnut flavor. For lunch we stopped at a local pasta restaurant for spaghetti carbonara and a mixed green salad with tuna. It was all very good.

Nearby we toured the Alter Sudlicher Friedhof or Old South Cemetery founded by Duke Albrecht V as a plague cemetery in 1563. It was also the burial ground of the dead from the Bavarian uprising of 1705-6 which was a national people’s revolt against the occupation of the Austrian Habsburgs during the War of Spanish Succession (1701-1714). The revolt lasted 75 days with the number of deaths on the Bavarian side numbering over 5,000 men. This led to the collapse of the uprising against Austria in January of 1706 when peace negotiations led to the surrender of the Bavarians.

From 1788 to 1868 this was the only cemetery for the entire metropolitan area of Munich and why it contains the graves of many prominent Munich figures of that period. Painters, philosophers, mayors, sculptors, actors, composers, architects and more have a place here.

Today the cemetery serves as an Art and Cultural history monument and is open to the public. From 2004 to 2007 most of the monuments were renovated and cleaned but today the cemetery is quite overgrown and in need of maintenance.

The weather has been a mixed bag but today was the warmest we have experienced thus far. It was clearer and sunnier and the temperature rose to about 90 degrees Fahrenheit.

For dinner we walked next door to the Le Meridien Hotel where they have a local German restaurant. Since we had a late lunch we were not that hungry so Mark had a salad and Kent had the local delicacy: Apple Strudel with ice cream and vanilla sauce.