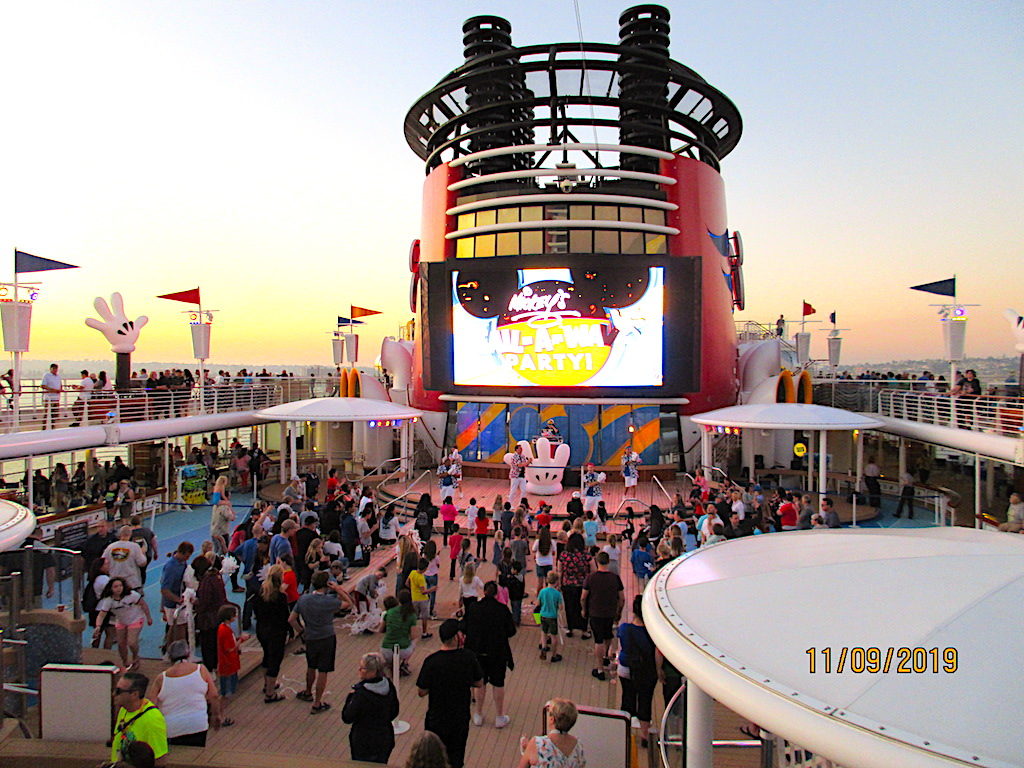 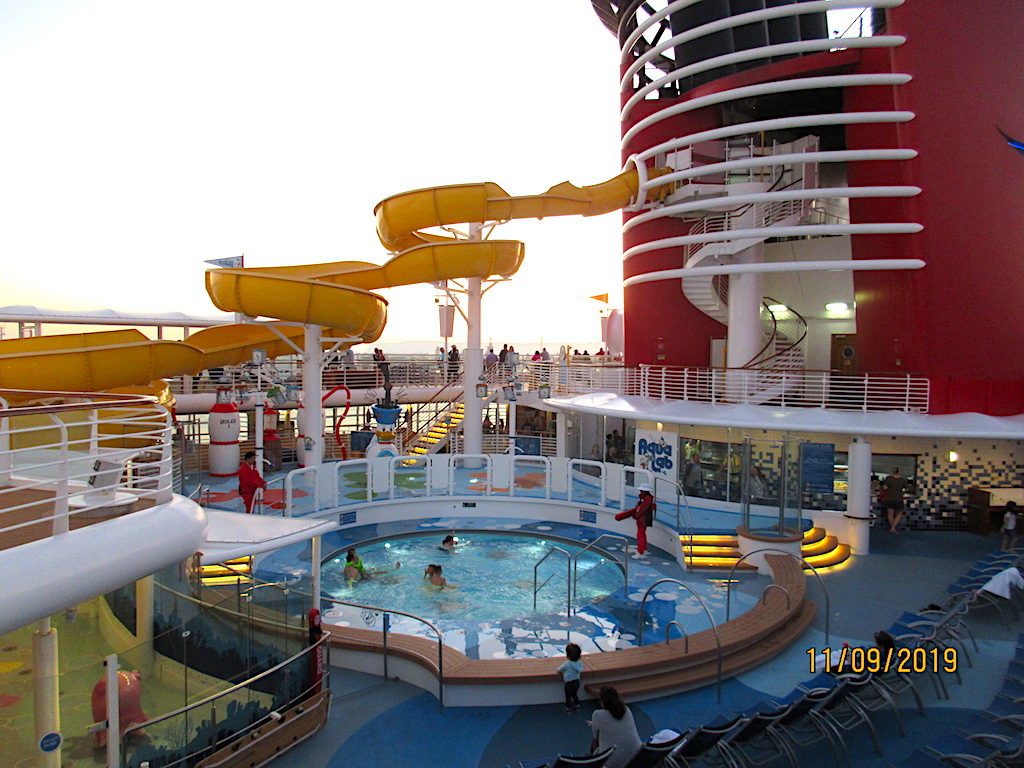 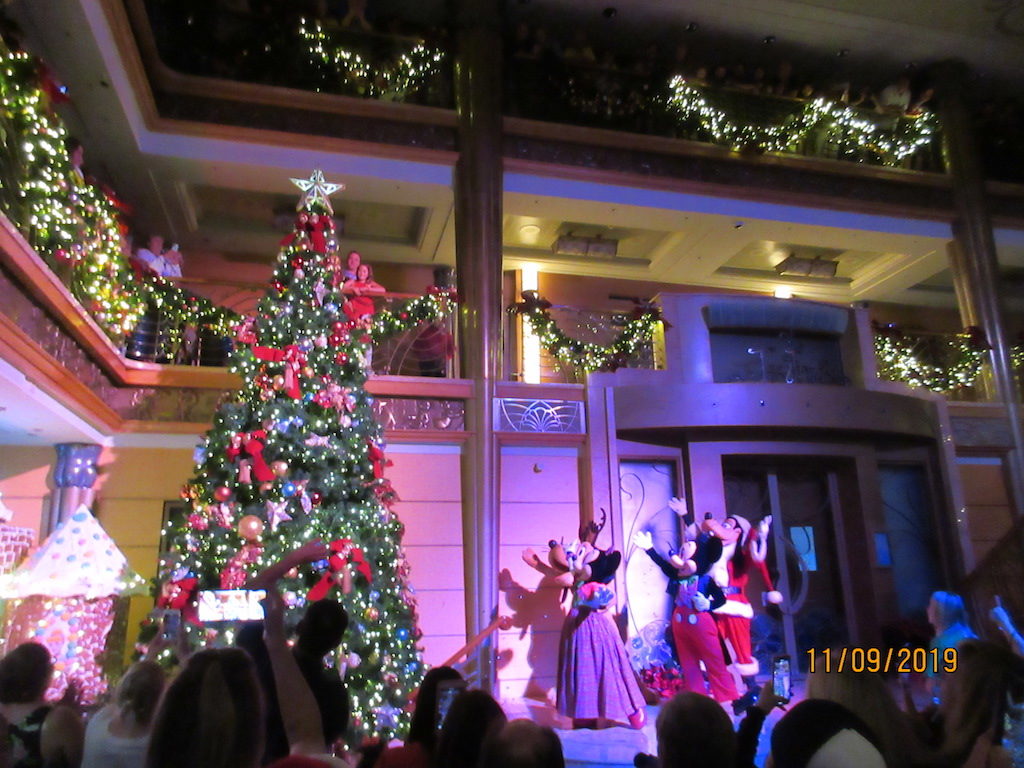 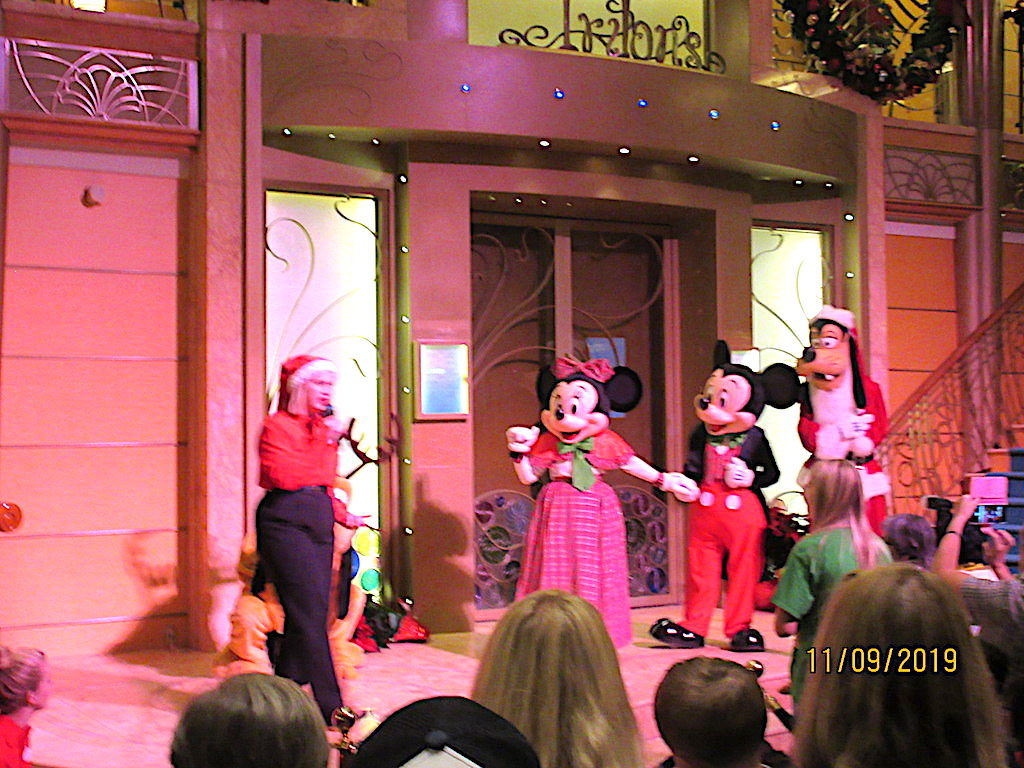 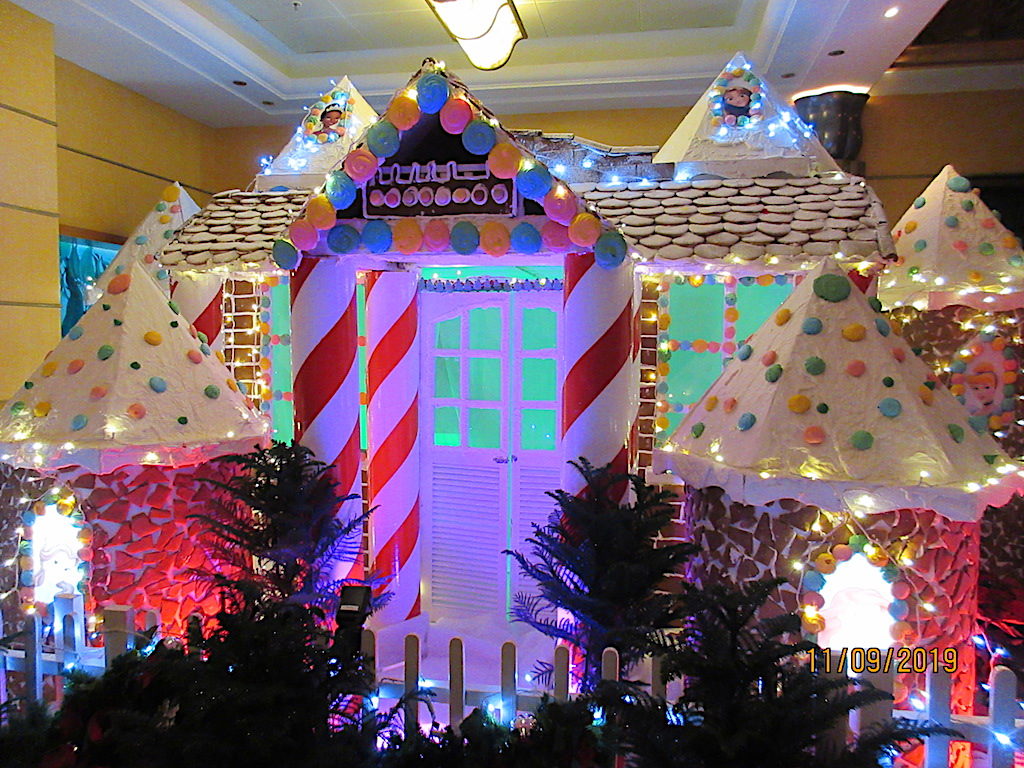 Midday, we boarded the Disney Wonder cruise ship operated by the Disney Cruise Line. The ship with its 11 decks was completed in 1999 and is decorated in the Art Deco style. There are 875 staterooms accommodating 2,400 passengers and has a crew of 950. On this particular re-positioning cruise there are about 1,800 passengers onboard and only about 275 children. On a typical cruise they usually have nearly 1,000 children.

We traveled with our dear friend, Sandy–otherwise known as Ms. P., and her mother, Claire, who lives in Florida. Claire is 92 and just keeps on going. Good for her.

The ship is very nicely appointed and all of the artwork onboard is related to Disney. We explored the ship’s public rooms which are all beautifully decorated. The ship includes many spaces specially designed for children’s activities, including a large water slide on the top deck of the ship.

After our mandatory life-boat drill, there was a festive sail-a-wave party on the upper deck. Most of the guests attended, singing songs, dancing, drinking and enjoying all of the Disney characters who attended.

The evening’s main stage entertainment was a Filipino acapella group of five young men called Filharmonic. They had been semi-finalists in NBC’s hit musical competition called The Sing Off. They also were featured in Pitch Perfect 2 before becoming a viral sensation after their Late, Late Show appearance. They have wonderful voices and blend well together. The sounds they can make come out of their mouths is amazing.

When we arrived, there was a team of people decorating the public spaces for Christmas. They added many artificial trees and garlands as well as fresh red poinsettias. In the lobby there is a very tall Christmas tree next to an almost life-sized gingerbread house. We attended the tree lighting ceremony where Mickey, Minnie and several other characters came to sing carols and light the tree.

Before dinner we enjoyed a drink in French Quarter Lounge where a duo called the NOLA Duo performed. The man played the trumpet, bass and violin while the young woman with a wonderful voice sang a variety of vintage melodies. At different times of the evening they perform different types of music from the blues to the top hits.

For dining, Disney uses a dining rotation between three main restaurants each with a different theme. Our dinner on this night was in the dining room called the Animator’s Palate. The restaurant walls are covered with pencil sketches of Disney characters and stories in black and white. The ceiling has painting palates with colored lights used as the paint colors. The columns in the room are shaped like paint brushes and the walls are covered with framed television screens. Throughout the evening the light colors change around the room and the television screens project altering photos of black and white pencil sketches to full color renderings and photographs of everything Disney. We went to bed shortly after dinner.