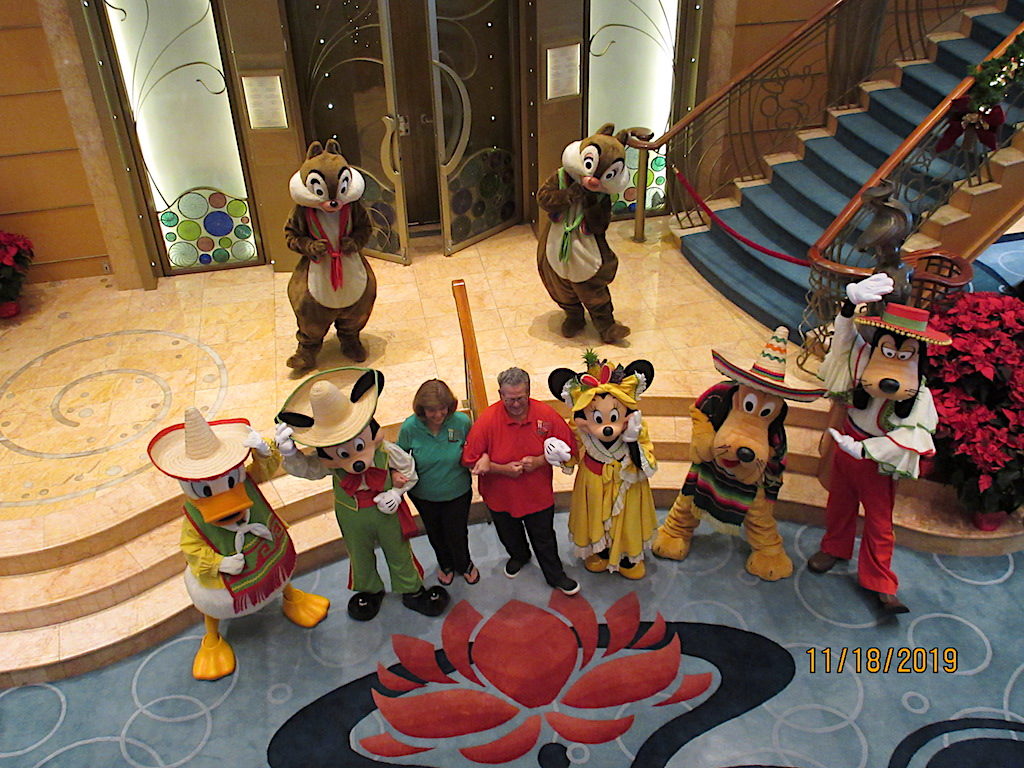 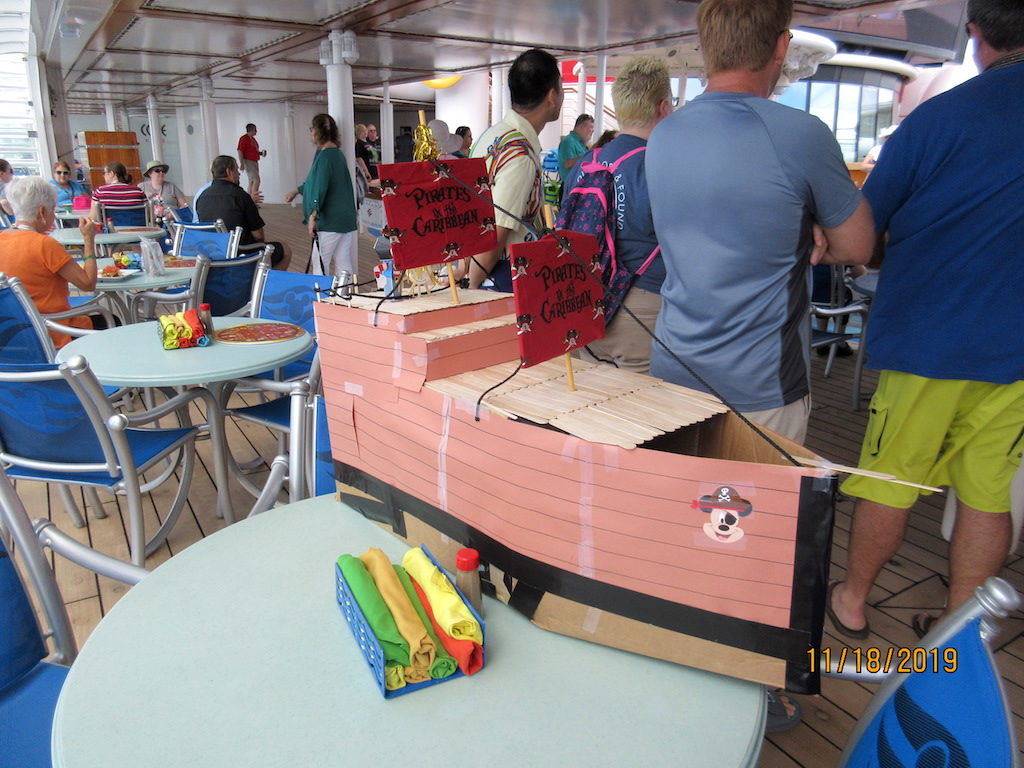 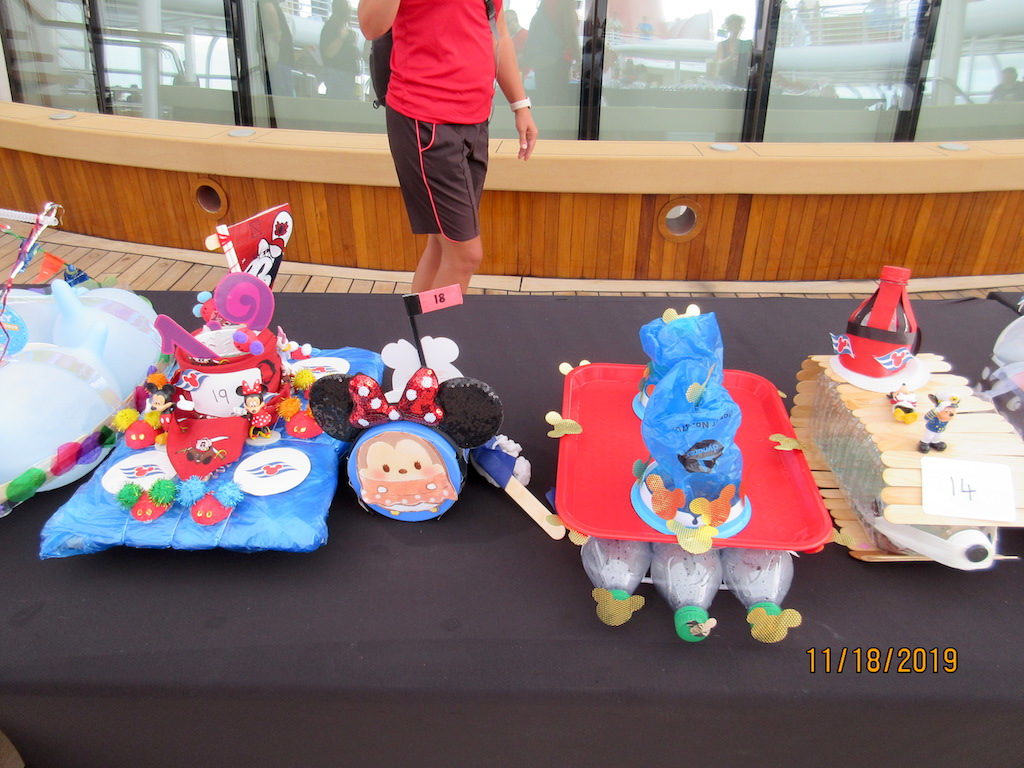 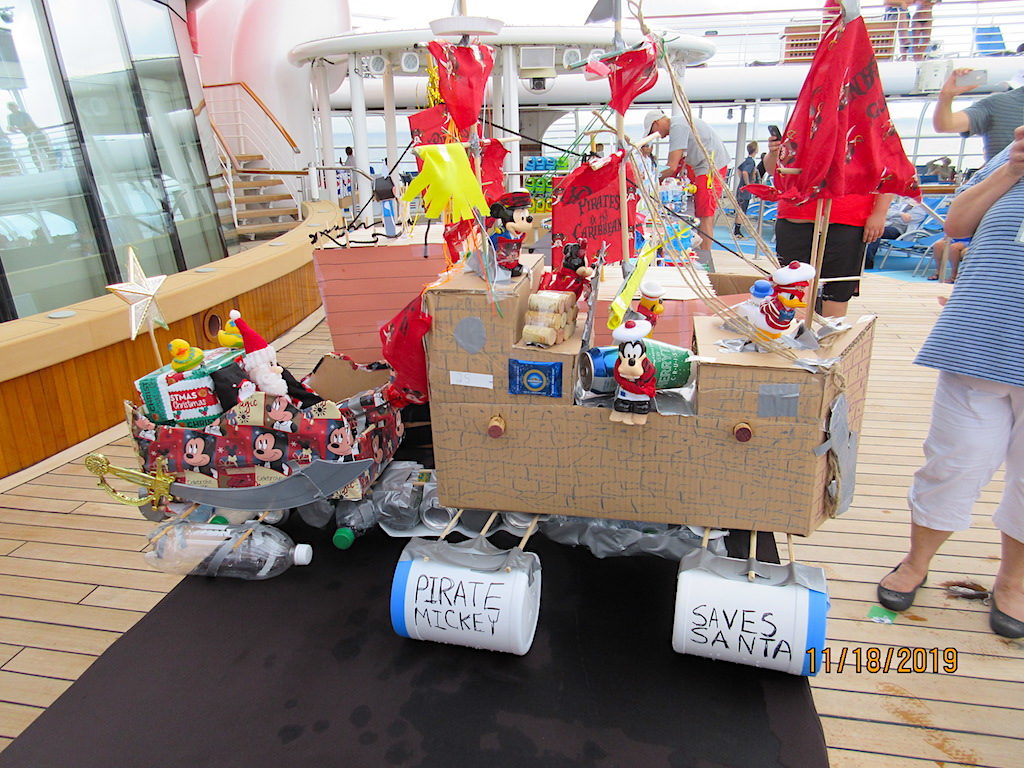 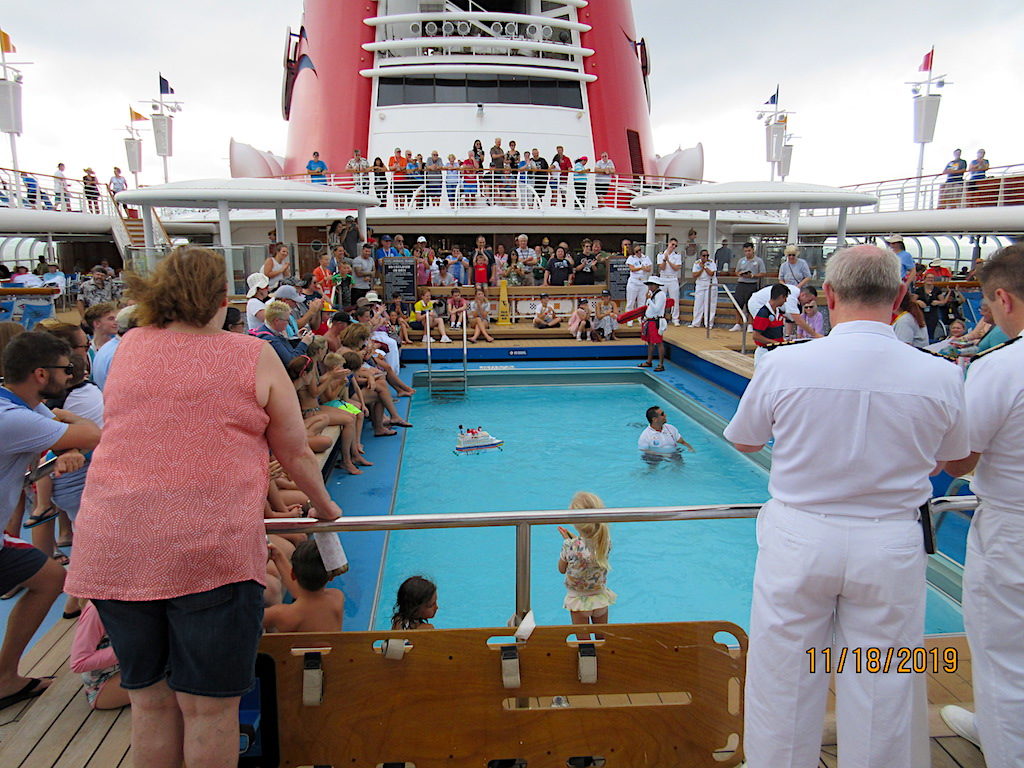 It was Mickey’s 91st birthday and so each guest was given a commemorative button to honor this special occasion. The thing that we found unusual was that there were no special events for the occasion, no birthday cake and no Happy Birthday song.

This was a sea day as we traveled from Cartagena, Columbia, to our next port of call at George Town, Cayman Islands. We were lucky enough to have internet service restored after nearly five days without service.

Our first activity was a cooking class with chef Georg Paulussen from Disney’s Polynesian Resort. The days recipes were desserts called Spaghetti Ice Cream and Ice Cream Pizza. The spaghetti ice cream involved pressing vanilla ice cream through a ricer to extract long, thin strands of ice cream similar to spaghetti. Once the ice cream is placed in the bowl, the chef used a strawberry and raspberry puree as sauce over the pasta. For cheese he used grated white chocolate and mint leaves to represent the basil leaves you might put on a pasta dish.

The ice cream pizza was created using a thin cookie sheet of sponge cake or white cake to begin. The strawberry and raspberry puree was then covered over the cake like a sauce. Next, he added both whipped cream and ice cream in small scoops to represent the cheese. He then added fresh fruits like pineapple, sliced strawberries for peperoni and cherries for olives, etc. They then served up the pizza for everyone to taste. It was a pretty tasty dessert but a lot of work to make.

Our next activity was a lecture by Captain Ken Puckett on WWII Axis Forces Plans to Destroy the Panama Canal. He showed many photos and diagrams of one of Japan’s super deluxe submarines. This submarine was extremely large, carried three planes with foldable wings that would be put inside the submarine and traveled faster than any submarines that the US had at the time. Japan wanted to destroy the canal to slow down the US connection from east to west coast and slowing the war effort.

At lunch time they had a boat building bash at Goofy’s Pool on deck 9. About forty sets of guests created boats out of found objects onboard the ship. The boats were set sail in the pool to make sure they could float. It was also a requirement that the boats could handle the weight of one full can of coke. Members of the officers staff onboard judged the boats on creativity, floatability, and how they fit the Disney theme. Many of the vessels were very creative and ranged in all sizes from six inches in diameter to the size of a hula hoop.

Kent attended a tour of the ship’s art onboard, all of which is Disney related in some way. There are many sketches and photographs from Disney characters, films, theme parks and ships. There is a mosaic created from Disney stories in one of the main dining rooms.

The evening’s entertainment was The Vocal Talents of Heidi Blickenstaff who starred as Ursula in The Little Mermaid on Broadway. She also starred in Disney’s Theatrical world premier of Freaky Friday as well as the Disney Channel Original Movie of the same name. Heidi sang many numbers from her Broadway shows, the movie Freaky Friday and several non-Disney songs like New York, New York. She has a very good sense of humor and seems very down to earth.

After dining in Tianna’s Place, we attended a game show called Snippets. In the game there are two teams of three who compete against each other to recognize short sound bites. If you correctly identify the sound clip–like a TV show theme song–your team receives a point. If you get the answer wrong, your fellow team can steal the point if they can identify the sound bite.

Following the game show, Jeff Civillico performed another comedy and juggling act in the Azure Lounge. Having performed over 1,000 shows as a headliner on the Las Vegas Strip he has an easy interaction with the audience. He seems to enjoy the audience participation which most often leads to humorous moments. On this night he managed to escape from a straight jacked while balancing on a unicycle.

Some Observations: Of the 1800 people on board, most are Disney fanatics. They know movies, characters and other Disney facts. We are less knowledgeable and are learning a lot. Many women wear Mickey ears and Disney dresses, while other people wear Disney-themed T-shirts and use other Disney items, like back packs, notebooks, etc. Many passengers are older, but kids at heart. They love Disney! There are Disney-related activities for various age groups of kids, as well as adults. Disney music plays on the sound system all over the ship….it makes you think there is no evil in the world….this is a truly happy place!

We have met three other California passengers from the Simi Valley area: Jeremy, Jonathan and April. They have been on two other Disney cruises and are enjoying this one also. We hope to connect with them in the future. Jeremy and Jonathan work for the Department of Defense and are in their twenties and thirties, respectively.