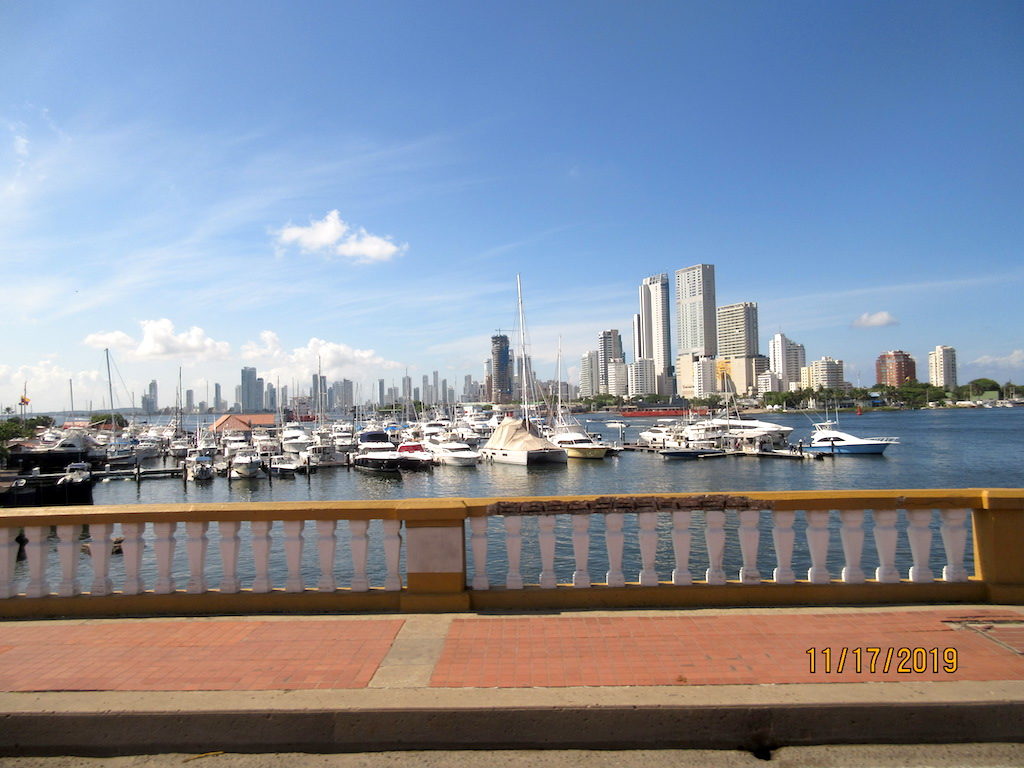 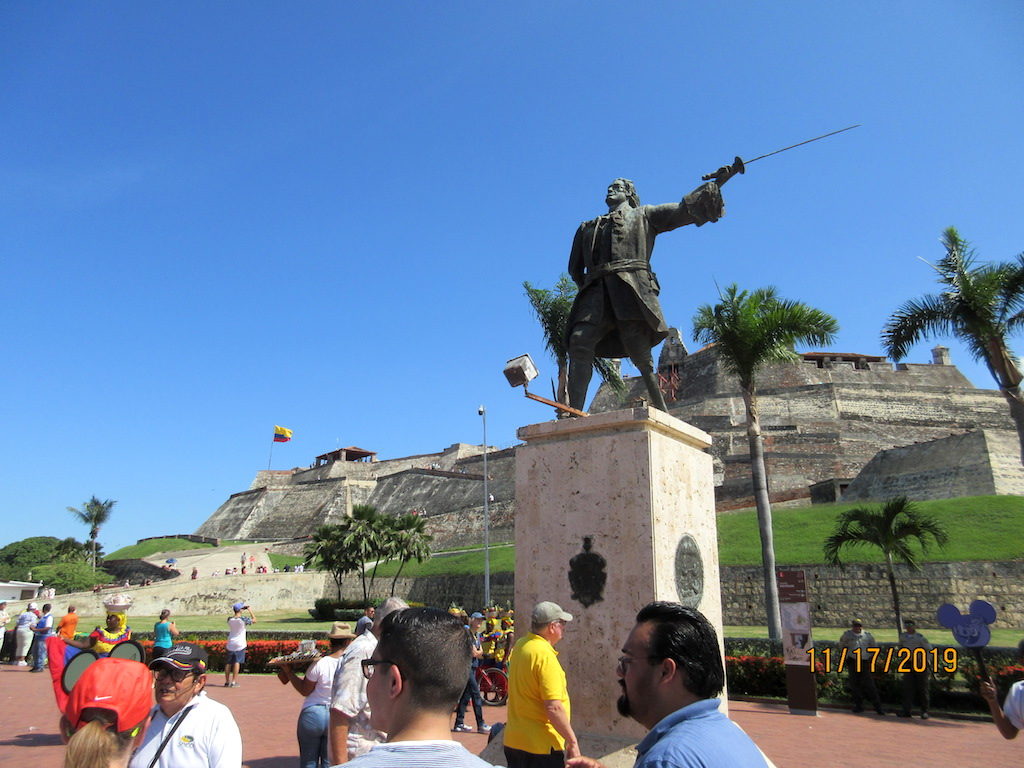 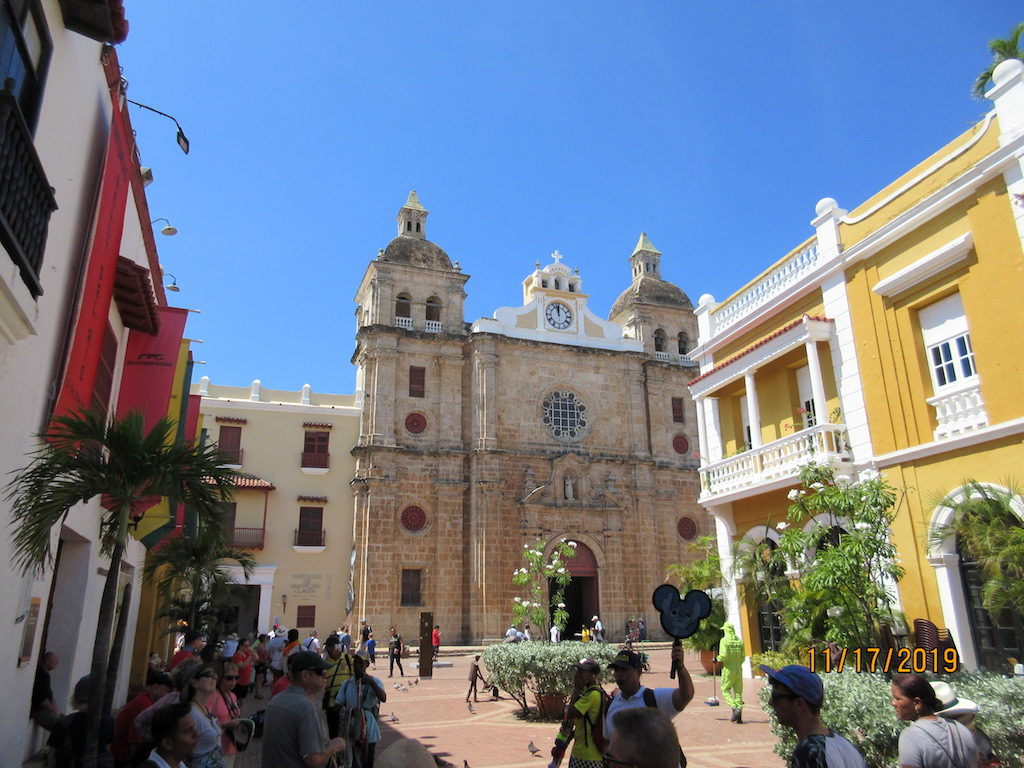 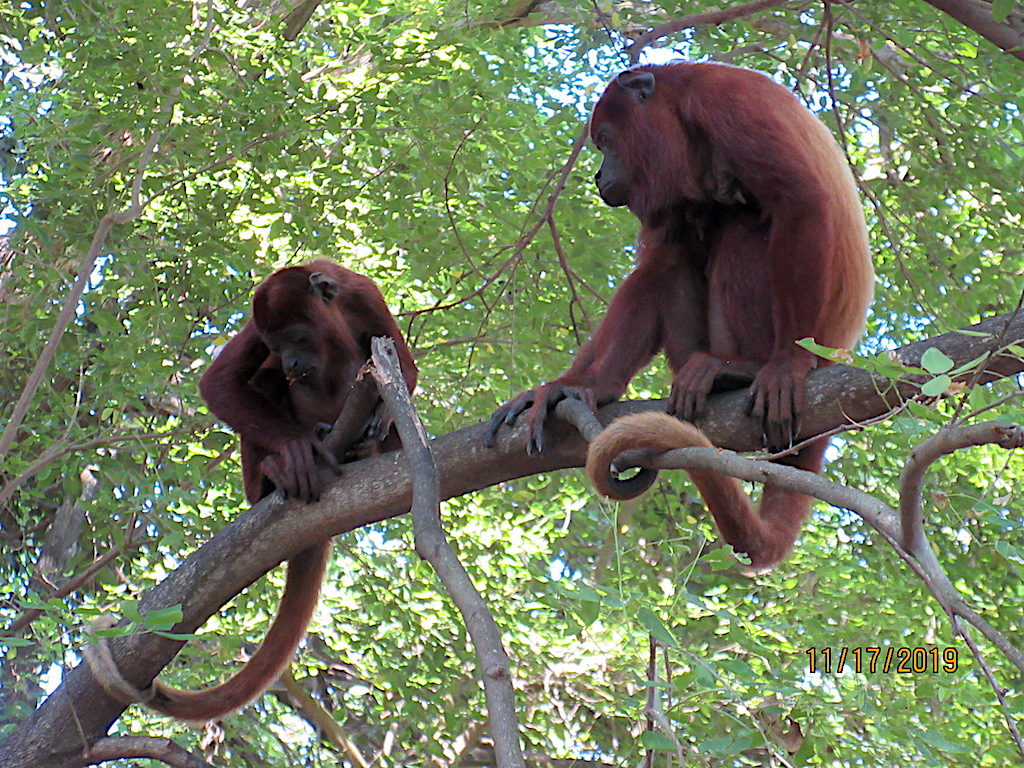 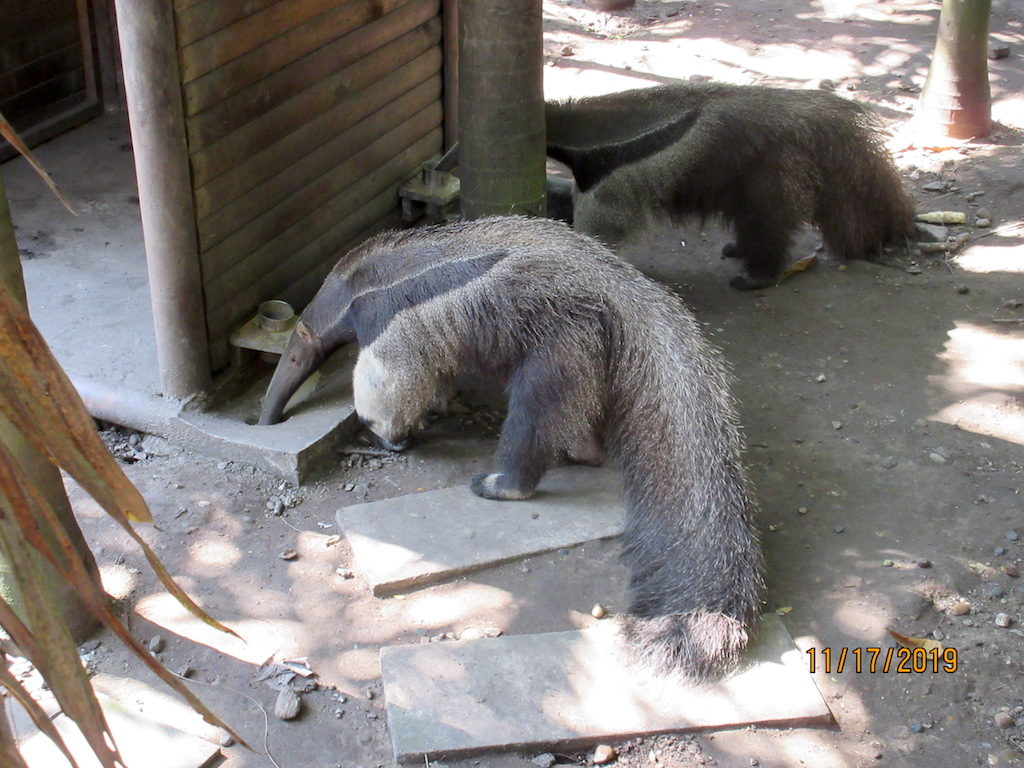 Cartagena, Columbia, with a population of approximately 1,250,000, is a major port founded in 1533 by Spaniard Don Pedro de Heredia. During the colonial era it was a key port for the export of Peruvian silver to Spain and for the import of enslaved Africans.

Due to Cartagena’s tropical location, the climate changes little throughout the year. The average daily high is about 89 degrees and the lows are about 77 degrees. Unfortunately, they also have an average humidity of about 90 percent and 40 inches of rain annually. On this day it was extremely warm and very humid but there was a bit of a breeze which helped to make it tolerable.

We took a city bus tour where we made several stops, getting off the bus and walking for a while before re-boarding the bus. Our first stop was inside the walled city in a residential neighborhood. Being Sunday morning, it was rather quiet, but we were able to experience the beautiful colonial architecture, brightly painted homes and colorful bougainvillea growing everywhere.

The old walled city is very pedestrian friendly with narrow cobblestone streets. Most of the buildings are two stories with large narrow wooden balconies protruding out over the sidewalks reminiscent of those found in New Orleans. The roofs of the buildings are mostly red clay tile and have a very Spanish look to them.

We made a photo stop at the old fortress where many souvenir vendors can be found. They were wanting to sell us hats, silver, jewelry, water, cigars, sunglasses and more. As we walked around the city with our local guide we popped into a market to see the local empanadas, stopped into a church to explore and take photos, we stopped in historic squares to learn about the history and take photos, and stopped to view city sculptures.

Our last stop was at a local emerald museum and jewelry shop called Caribe. Upstairs they have a museum where they tell you about the mining of the emeralds, grading of the emeralds, how they differ from country to country and how they are polished and made into jewelry. Downstairs they had a large showroom with all types of emerald necklaces, pendants, rings and more.

Back at the cruise ship terminal there was a small zoo of sorts including animals like monkeys, anteaters, flamingos and more.

The evening’s entertainment was The Physical Comedy of Jeff Civillico. Jeff’s version of physical comedy included balancing things like a ladder or a deck chair on his chin. He juggled an assortment of unrelated items like a butcher knife with a bowling ball and an apple. He started juggling as a child after seeing a juggler show and began practicing and performing for family and friends at home. For the last ten years he has been performing in Las Vegas at his own show at the Paris Hotel.

After a Frozen-themed dinner in the Animator’s Palate dining room, we attended a show they call Match Your Mate. It is basically the same show as The Newlywed Game. They selected the couple married the least amount of time (2 years), the most amount of time (49 years) and then a couple selected by the applause vote of the audience. It was very entertaining and unbelievable what people will disclose about themselves in front of an audience.