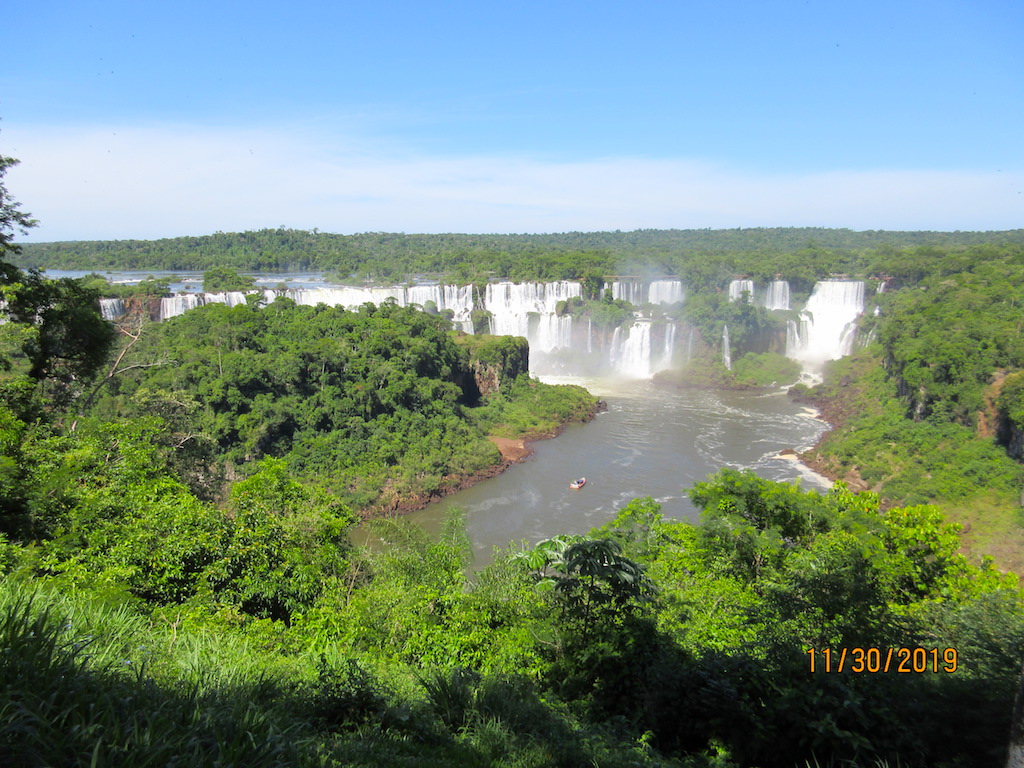 View from the Iguazu National Park in Brazil 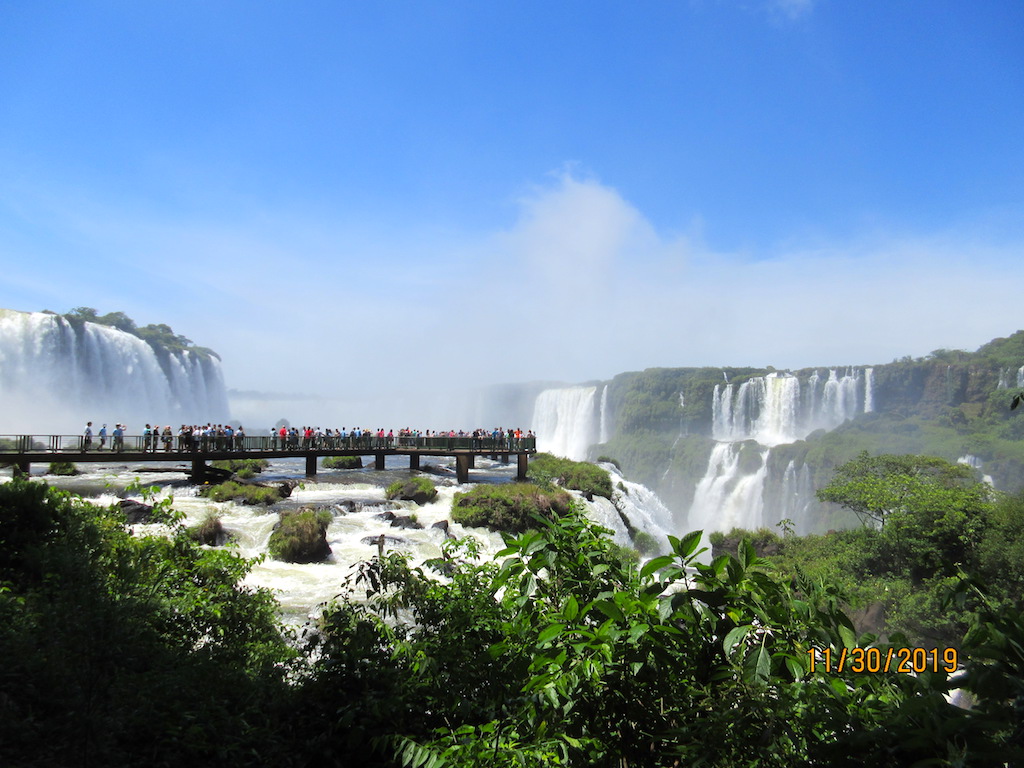 Iguazu Falls from the Brazil Side 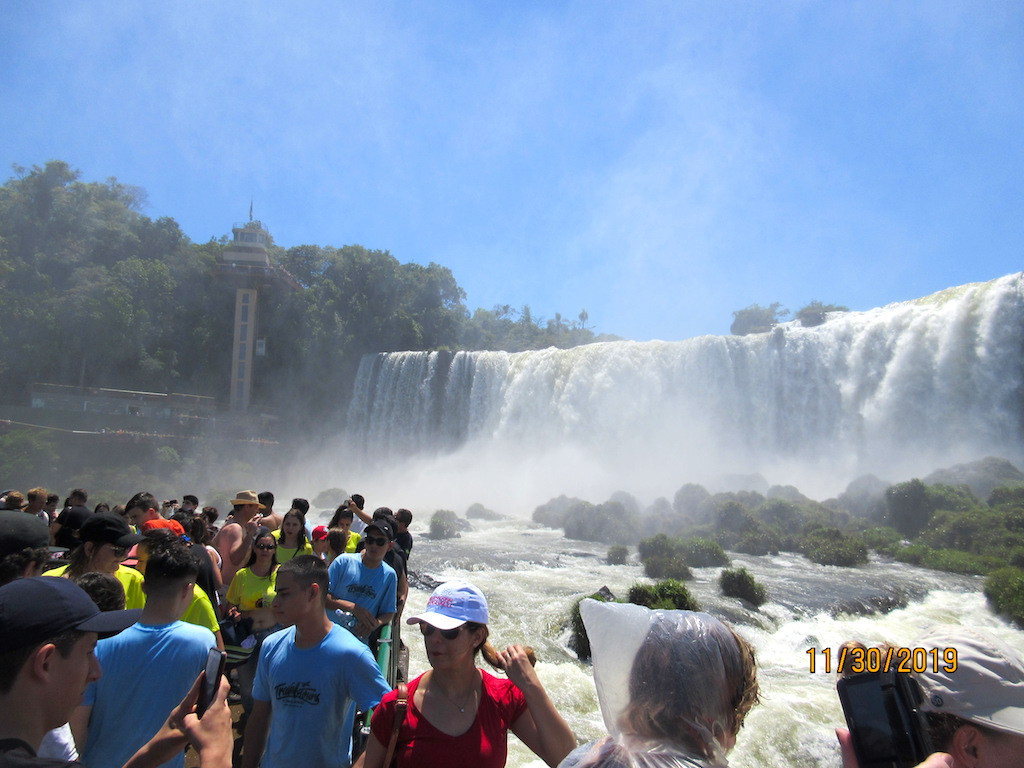 Iguazu Falls from the Pier 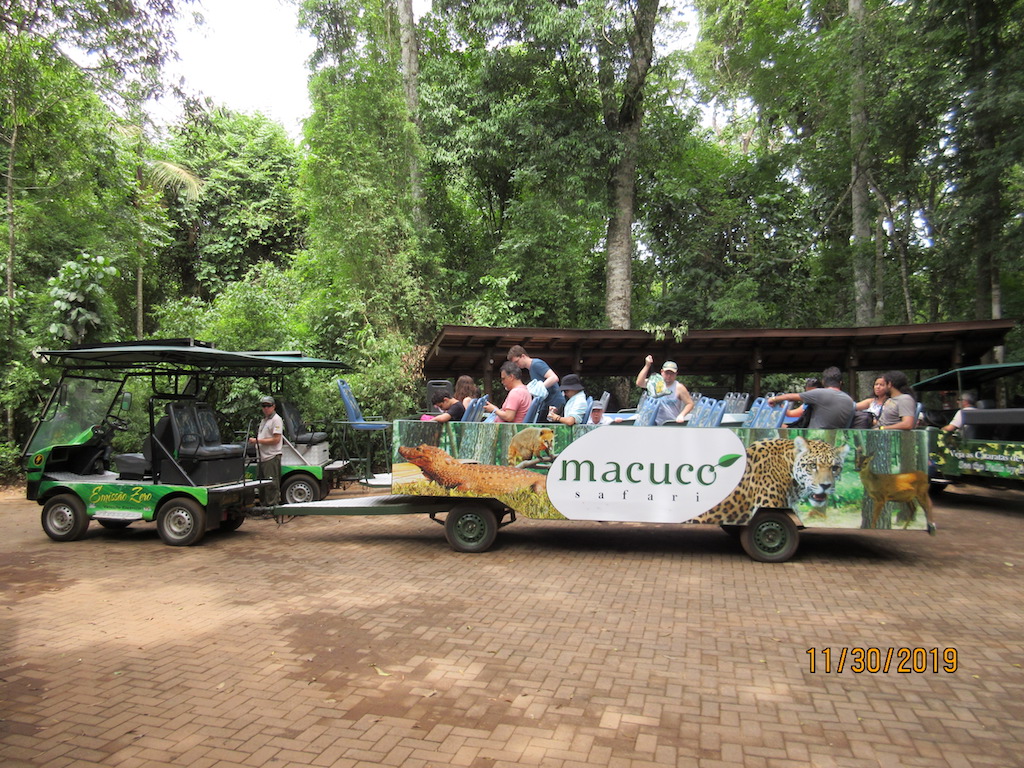 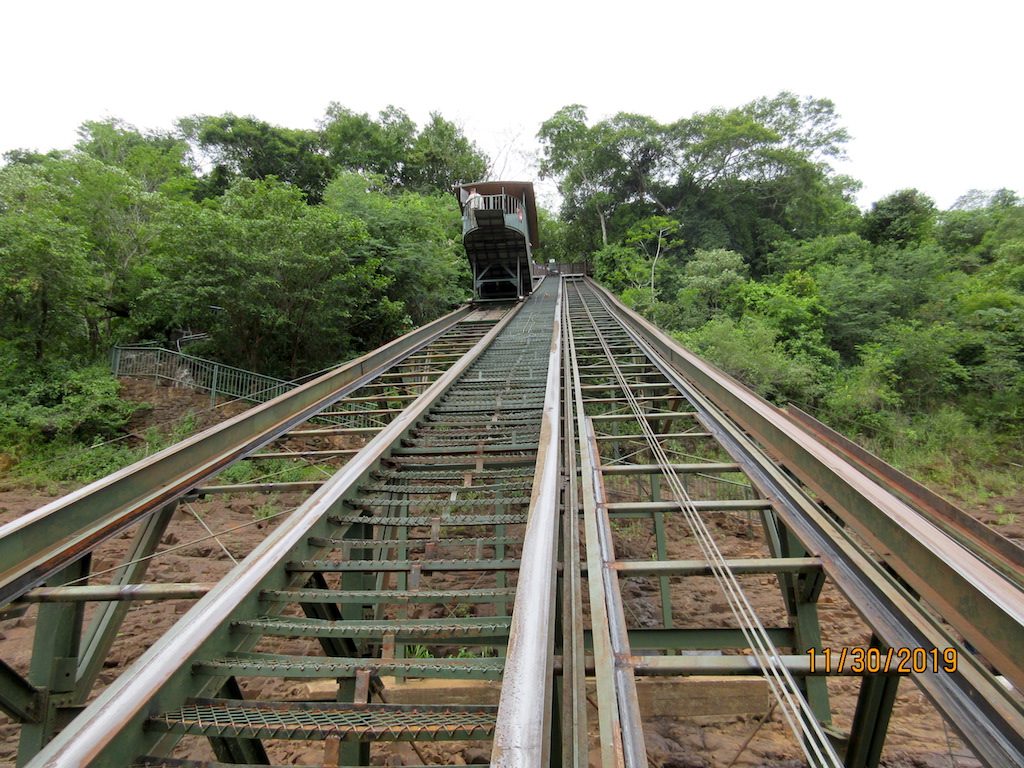 Funicular Down to the Rivers Edge 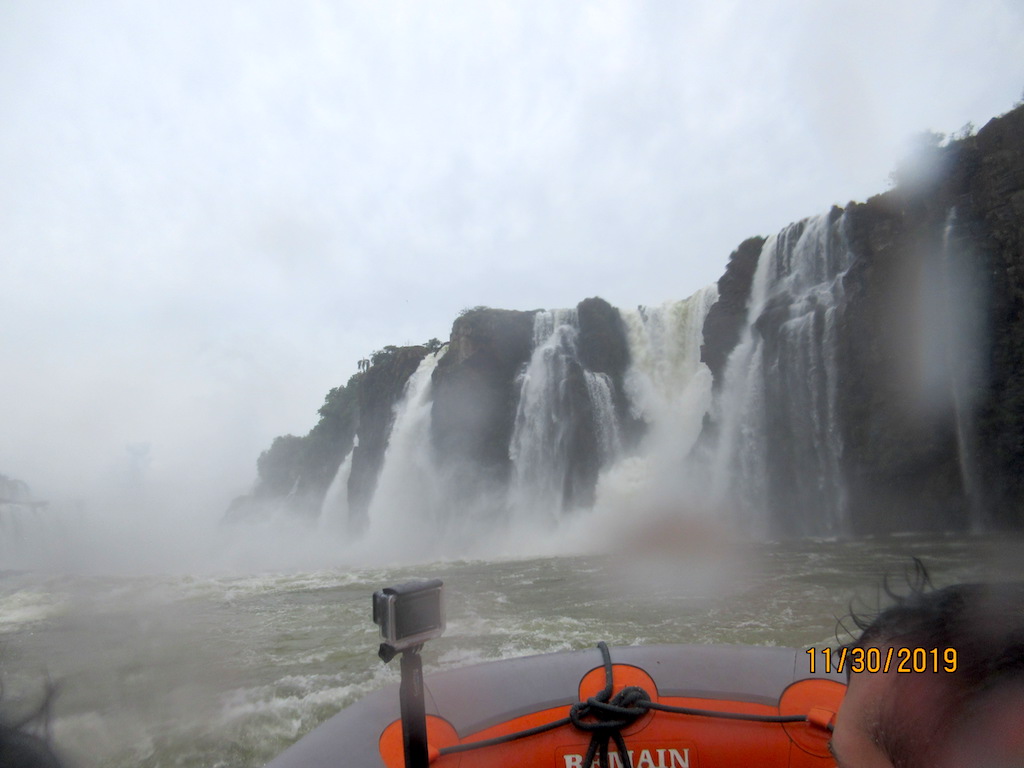 Paraguay’s Spanish pioneer Alvar Nunez Cabeza de Vaca found the waterfalls in 1542, naming them Holy Mary Waterfalls. Since the 19th Century, people began to visit the falls. In 1934, Argentina, and in 1939, Brazil, created national parks. In 1984 the area was declared a UNESCO Natural Heritage Site. The number of falls very depending on the season of the year, reaching 270 in number during the wet months and a minimum of 150 falls during the dry months.

This morning we departed our hotel at 9:00am bound for the Brazilian Iguazu National Park. It was a Saturday and the buses were lined up as were the visitors in long lines waiting to purchase tickets into the park. We were required to disembark our bus, collect tickets from our group leader and have them scanned before re-boarding our bus to enter the park. Most people enter the park via double decker buses that they wait in lines to board.

Once inside the park, we took a magnificent trail, mostly paved with concrete and with sturdy wooden or metal rails. The trail led us along the rim of the Iguazu River to many panoramic views of the falls. We then began to descend towards the river’s edge and finally to the place where the Devil’s Throat waterfall cascades to the river below. The paths were narrow in many places and filled with thousands of visitors all going the same direction but stopping to take photos and selfies. Once we reached the Devil’s Throat there was a long pier that leads out into the river to capture the best photos and really see the falls up-close. Because of the large volume of water flowing in the river, the splashes and spray got us quite wet.

Once we finished exploring the falls, we headed back up the steep banks of the river via two elevators. There was a small line for the elevators but it moved fairly quickly considering the large number of visitors in the park.

A short distance away from the elevators along the upper edge of the falls is a complex with restaurants, where we stopped for lunch on our own. We once again had the empanada’s with beef and chicken and cheese. Slightly larger in size than those we had the previous day, but sufficient for lunch.

After lunch we took the bus to yet another location along the river’s ridge where we changed into our bathing suits for a true adventure. We first boarded an electric tram-style vehicle that held about 40 guests and the tram took us on a scenic tour through the jungle filled with dense trees and vegetation. From the tram we transferred to a jeep-like transport vehicle that held about 10 passengers. The jeeps were used to transport us down steeper roads towards the river’s edge, closer to Paraguay. From the transport vehicles we boarded a funicular taking us down to a platform on the river’s edge. We put on life jackets before boarding rubber like boats with seats in it for a 45-minute boat ride back to the falls. There were two choices when it came to the boat ride. The first choice was a dry boat where the guests would stay dry while the other option was a wet boat where you were guaranteed to get drenched with water. Not wanting to miss the excitement, we chose the wet boat. The boat took us up to the grand waterfalls where we could take photos of the falls from the base of them. Once we had our photos the boat was driven under the falls with our cameras safely stowed in clear plastic waterproof sleeves. The water was not too cold but we did get drenched under the falls. The water was so much that you had no choice but to close your eyes until you came out from under the fall. After the ride under the falls, we had to retrace our steps back to the platform dock at the waters edge. Then up the funicular to the transport vehicles, then onto the electric tram and finally back to our bus.

On our way back to the hotel we stopped at a local roadside stand where they make fruit juice drinks using sugar cane. A motorized machine squeezes the juice from the stocks of sugar cane and then the juice was blended with pineapple and lime juice. It was very refreshing.

Back at our hotel we explored the walking paths behind our hotel before getting cleaned up for dinner. The paths meander through the lush vegetation of the jungle and pass by the chef’s vegetable garden. We passed the chef grilling 8 sides of beef on an open fire pit and stopped to see the hotel’s animal collection. They have many desert-style tortoises, many peacocks, some deer, many colorful Macau type parrots and other birds.

By early evening there was rain and an electrical storm in the area. After cleaning up we enjoyed a group dinner with our fellow guests (18) at the hotel’s buffet style restaurant where we had dined a couple of nights prior when we arrived. The beef the chef had prepared outdoors this afternoon was delicious as were the desserts.