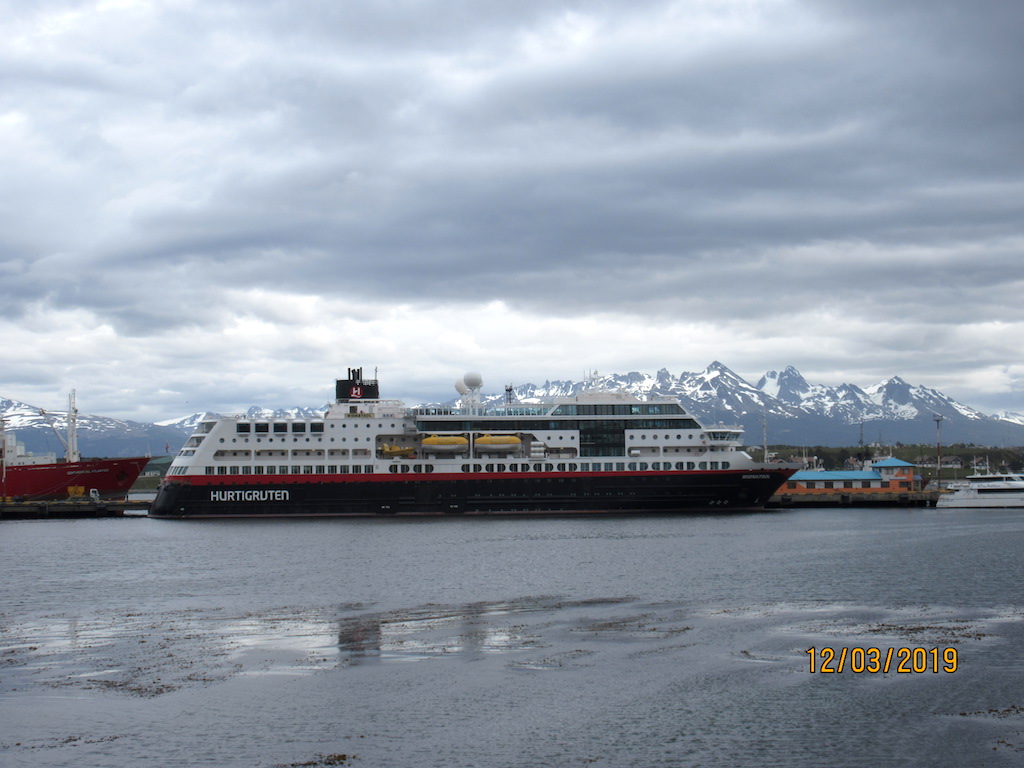 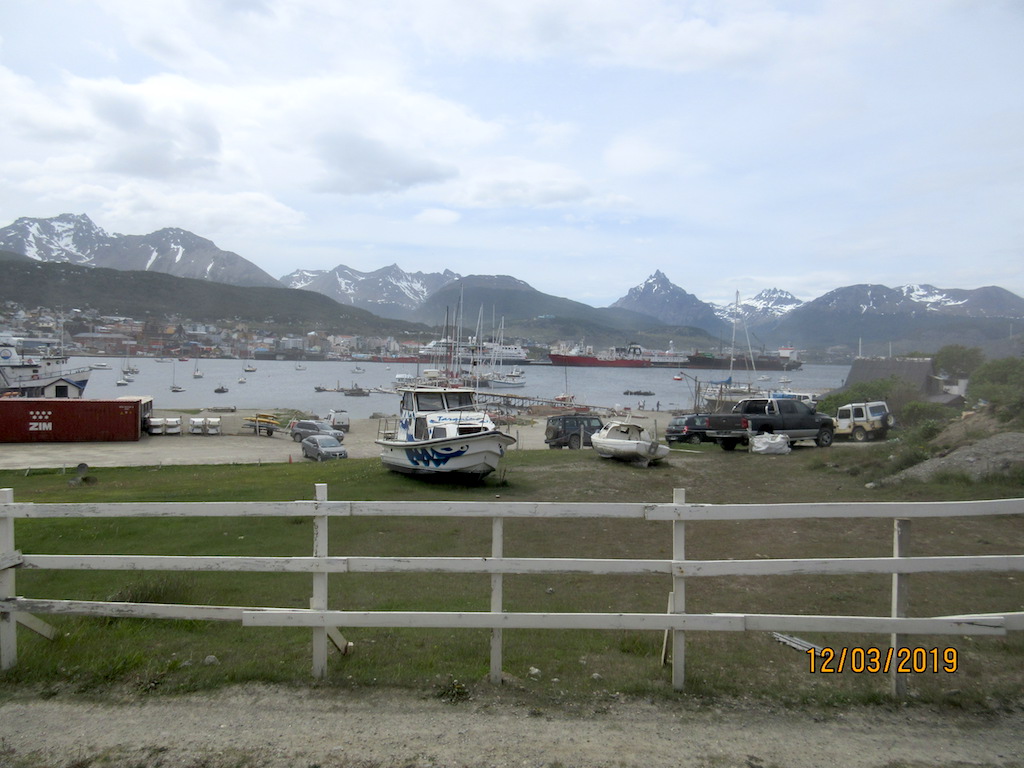 This was an early morning as we had a 5:15am wake up call to begin our day. A continental breakfast was served for us from 6:00am to 6:45am before heading to the airport for our flight to Ushuaia, Argentina. Our flight left Buenos Aires about 9:30am arriving in Ushuaia about 1:00pm.

We were taken on a brief tour of the town of Ushuaia with a population of about 80,000 inhabitants. The temperature was only about 60 degrees and windy. Patches of snow were still visible in the surrounding hillsides and mountains. Ushuaia is the world’s southernmost city. The city is surrounded by the Martial Mountains and situated on the Tierra Del Fuego archipelago. This bustling port town is an adventure hub for hiking, skiing and sailing.

After a couple of photo stops at the Ushuaia sign and the old airport for a view of the city, we had free time to explore the city center on foot. The city center is comprised of two main streets that stretch about ten blocks running parallel to the waterfront. There are many eating and drinking establishments, as well as a few souvenir shops, clothing shops, drug stores and shops selling outdoor gear. Some of our travel companions chose to eat crab at Freddy’s. We decided to stroll and Kent looked for and found a little penguin figurine for his travel collection.

At 4:00pm we boarded our bus for the short ride to the pier to meet up with our new home, the Hurtigruten ship called the MS Midnatsol. This ship was specially designed for cruising Arctic and Antarctic waters. Named for the Midnight Sun, the ship includes bright interiors and colorful décor, including Norwegian modern art. The ship has a two-story panorama lounge over the bow for viewing, multiple bars, a café, an a la carte restaurant as well as a traditional seating restaurant. There is a library, gift shop, sauna, fitness room, two heated outdoor Jacuzzi’s and an amphitheater for lectures. The public areas of the ship are very nicely decorated although our cabin is quite small. One of our beds folds up to become a sofa by day. There is a small desk and chair and a small bath with a shower.

Our first stop was to turn in our mandated physician’s report to the onboard doctor for review. It says we are physically fit to take the ship’s excursions. HA! Next, we received a light weight jacket with a hood that is water proof and protects us from the wind during landings or while out on deck. They also provided us with a metal water bottle to be used instead of any plastic water bottles that might find their way into the waters. The ship has multiple locations where you can fill these bottles with your choice of still or bubbly water.

For dinner, a wonderful buffet was served in the very nice sit-down restaurant complete with linen napkins. The buffet had fresh salmon, crab meat, crab legs, shrimp, leg of lamb, cheeses, salads, a pork dish, varieties of rice, many desserts and more. The food was excellent and as usual we ate too much.

We began sailing about 7:15pm, exiting through the Beagle channel into the ocean beyond. At 8:45pm the captain introduced the ships officers and the Adventure Team that will be taking us to Antarctica. There are many types specialists on the adventure team including biologists, nature guides, geologist and more.