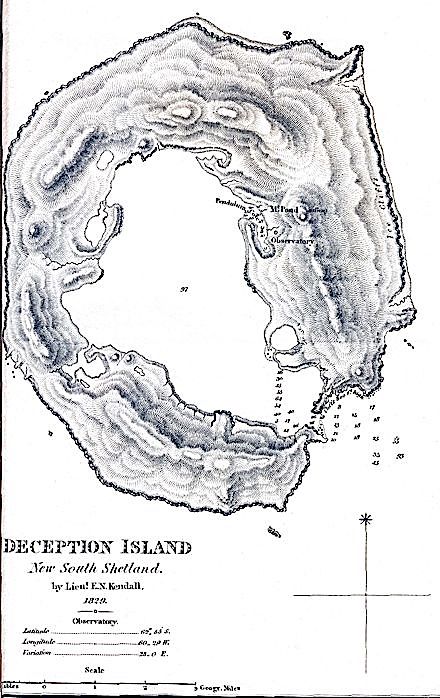 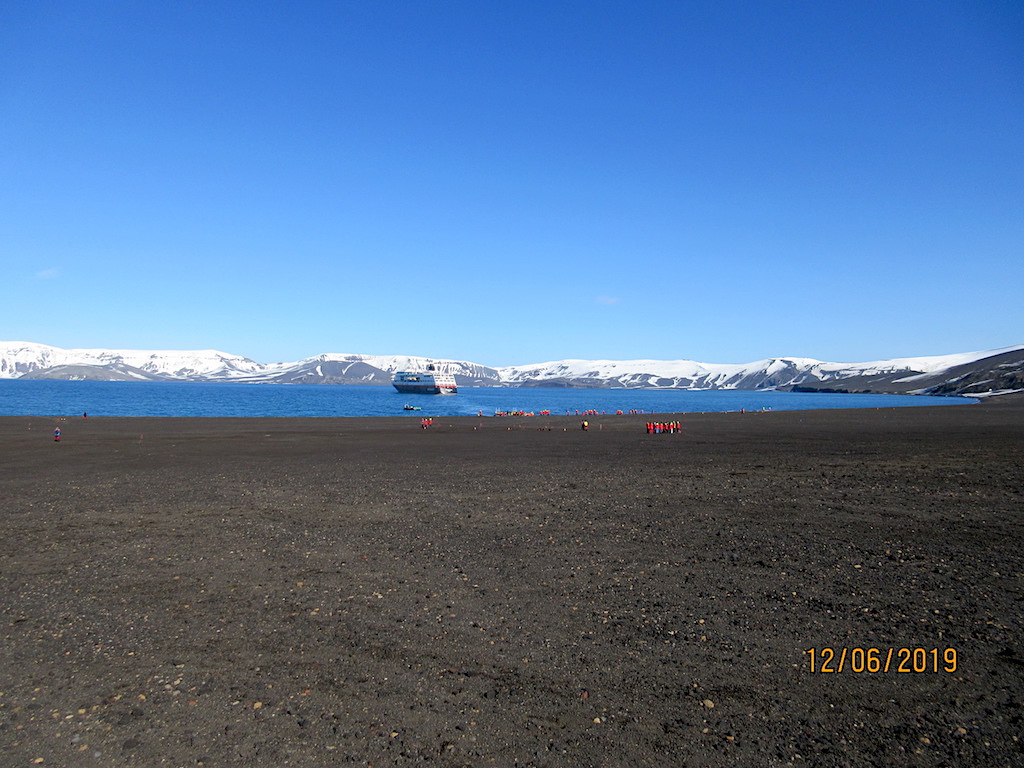 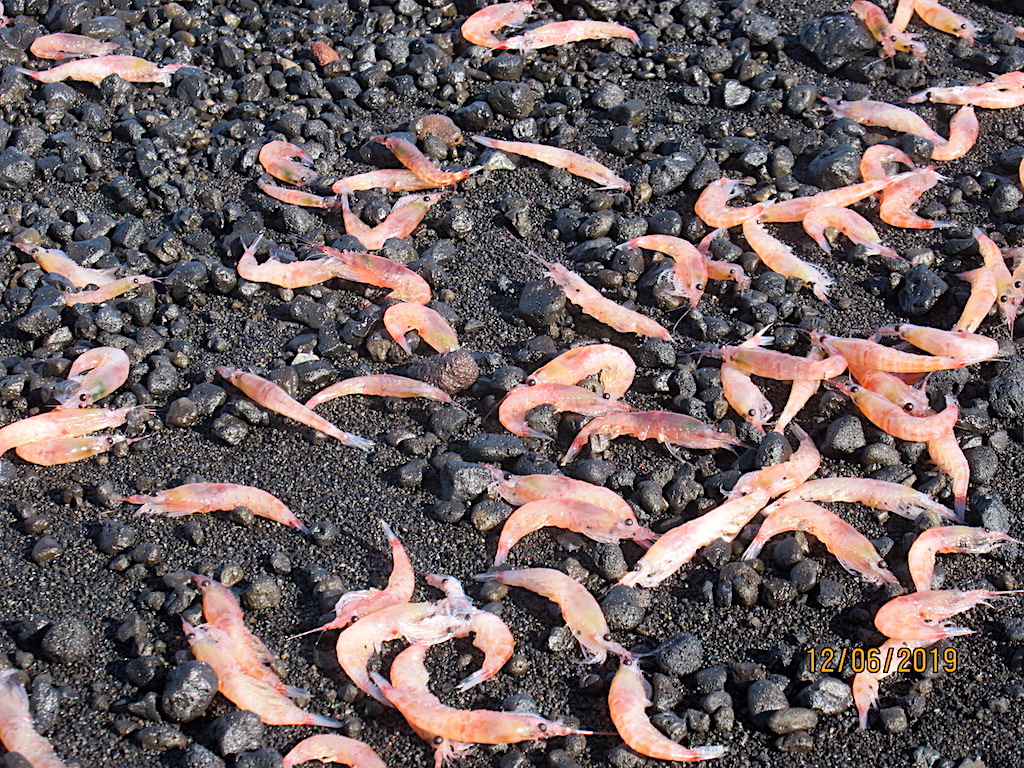 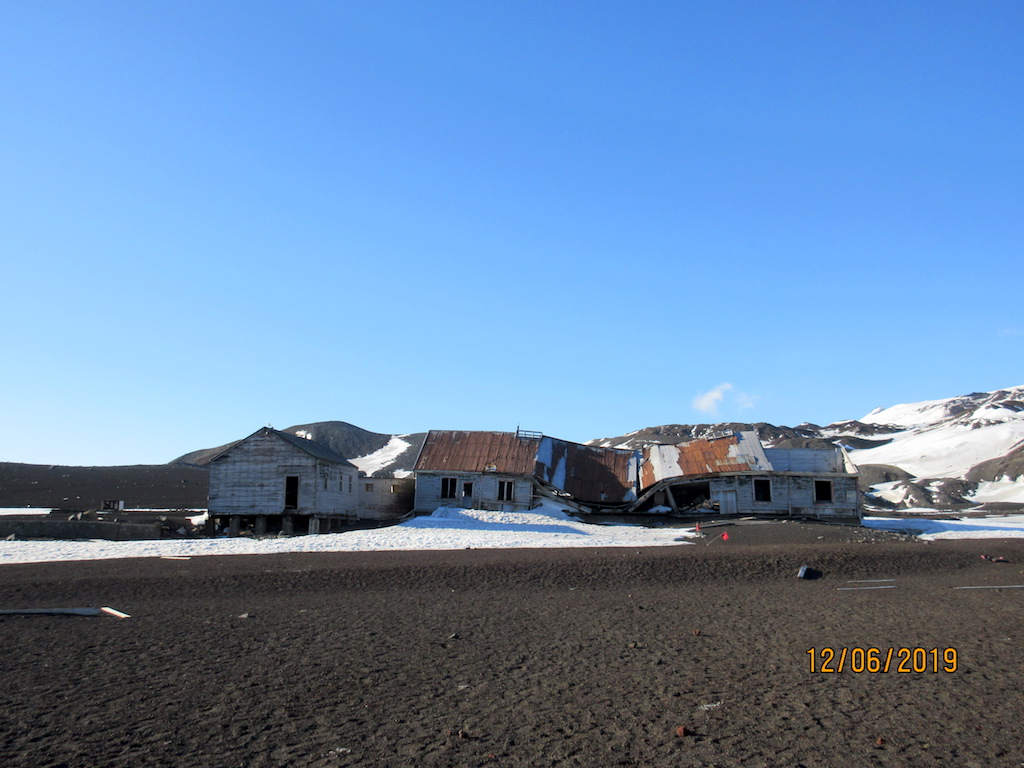 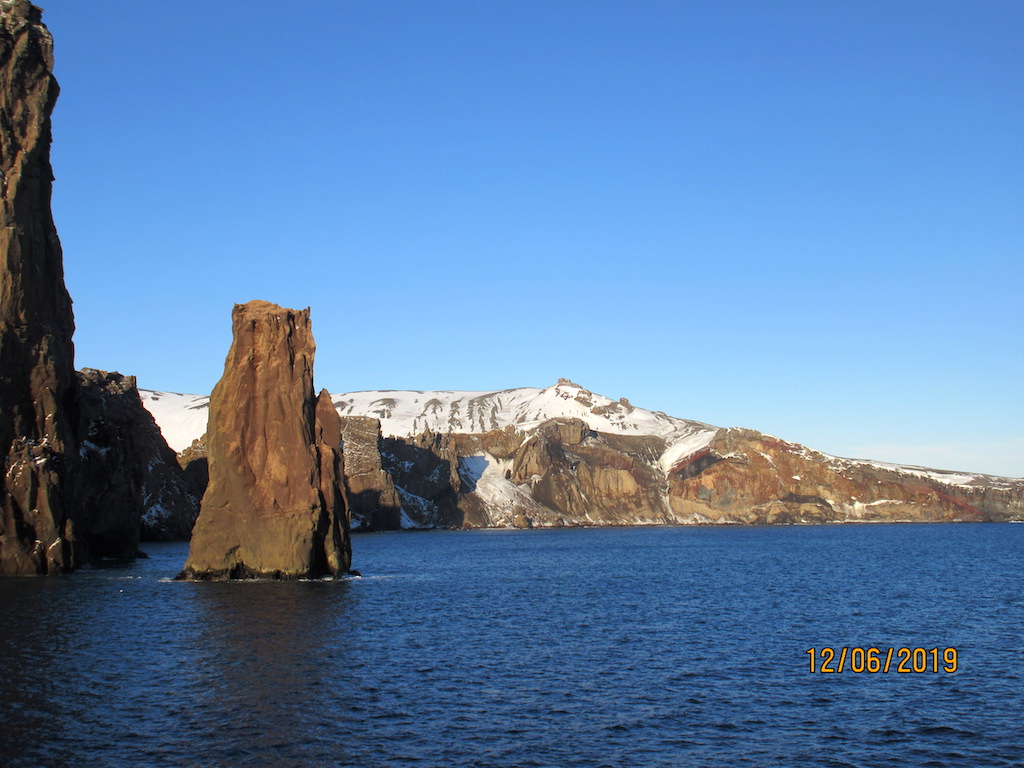 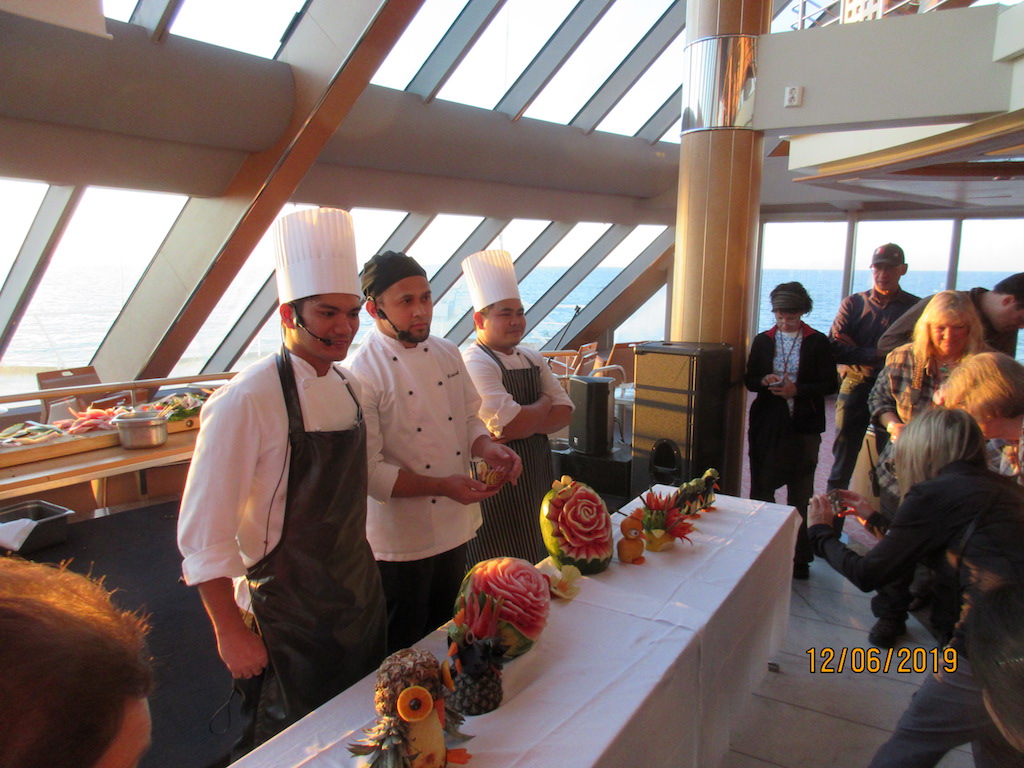 We arrived at Deception Island about 6:00am in full sunshine and with temperatures about 34F degrees. This island is a caldera of an active volcano that has partially collapsed over time and filled with water allowing ships to enter the center of the caldera through a small passage. The volcano has erupted in recent years in 1967 and 1969 destroying scientific stations. The size of the island is approximately 7.5 miles in diameter with the highest peak being nearly 1,800 feet in height.

The island was the site of a short-lived fur-sealing industry in the early 1800’s. In the early 1900’s an active whaling industry was established. Whaling processing factories, a small cemetery and housing for workers were built. The overproduction of oil led to a collapse in the whaling industry and by 1931 the operation ceased production. Today, remains of previous structures, boilers and tanks, an aircraft hangar and British scientific station house exist.

Our first stop was Pendulum Cove names for the pendulum and magnetic observations made there by British expedition under Henry Foster in 1829. Here we found thousands of Krill washed up on the beach because the water is too warm for the Krill here due to the geothermal heat radiating from the earth. Some locations in the caldera are so warm that they create hot spots and steam radiates off the surface of the cold water.

There were a few penguins coming ashore, checking us out and then heading out again. Inside the caldera is too warm for them as well and the volcanic rock on the shore is not inviting to the penguins for nesting either. One loan fur seal was lying on the beach sleeping. We were escorted by the ship’s staff to get near the remains of destroyed meteorological and vulcanological research station buildings built in 1955.

Back onboard the ship Mark attended a photography class on how to capture great photos in the Antarctic. The class was taught by one of the onboard photographers and she covered all types of cameras from cell phones to go-pro devices. She talked about manual settings as well as ideas for compositions.

For lunch the ship has set up a light lunch outdoors on the top deck where they served soup and reindeer wraps. The reindeer meat was thinly sliced and placed on warmed tortillas with lettuce, pickled onions and lingonberry preserves. The meat is slightly gamey tasting but not bad.

Our second landing for the day was at Whalers Bay which has been named an historic site. It comprises pre-1970 remains from the early whaling period from 1906-1912, the Norwegian Whaling Station from 1912-1931, a British scientific and mapping activity from 1944-1969 and a cemetery containing 35 burials and a memorial to ten men lost at sea. Once ashore we were able to see a few penguins, whale bones, a leopard seal, the remains of two wooden boats, some storage tanks, a few research structures and some headstone markers. The site was very beautiful.

Landings in Antarctica are adventurers that require a lot of time and patience. Since only 100 people are allowed on land at any given time, the ship is broken into 15 groups of people and only three groups are called to go ashore each hour. Once the first group returns, the fourth group is allowed to go ashore. This procedure continues until all groups have had a chance to go ashore. Each group is limited to about one hour ashore so others have the chance to go visit. On this day with two landings a short distance apart, the landings took place from 7:00am until about 8:00pm. A long day for the crew and a lot of waiting for the guests onboard.

After dinner, several of the chefs onboard presented a fruit carving demonstration. They created penguins out of eggplants, carved roses in watermelons, a duck from a grapefruit and orange, as well as several other creatures.

The days are very long as we have moved farther south. The sunrise is about 3:00am while the sunset is at nearly midnight. This means that no matter what time you get up or go to bed it seems like the middle of the day.