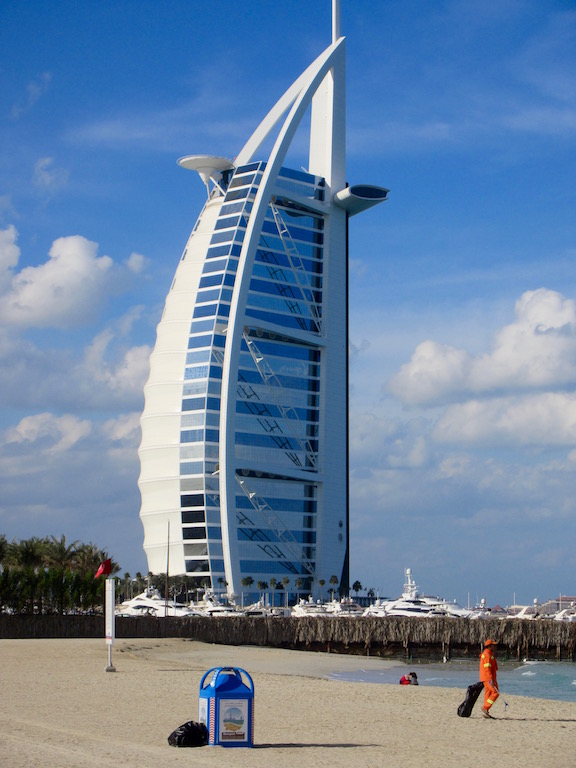 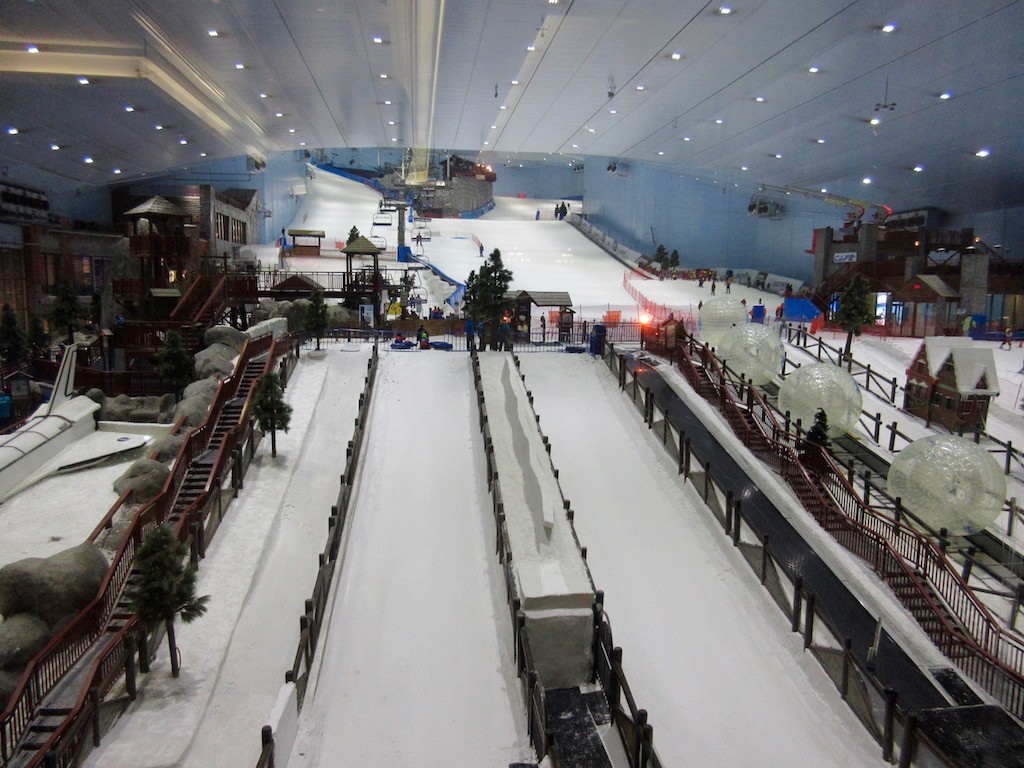 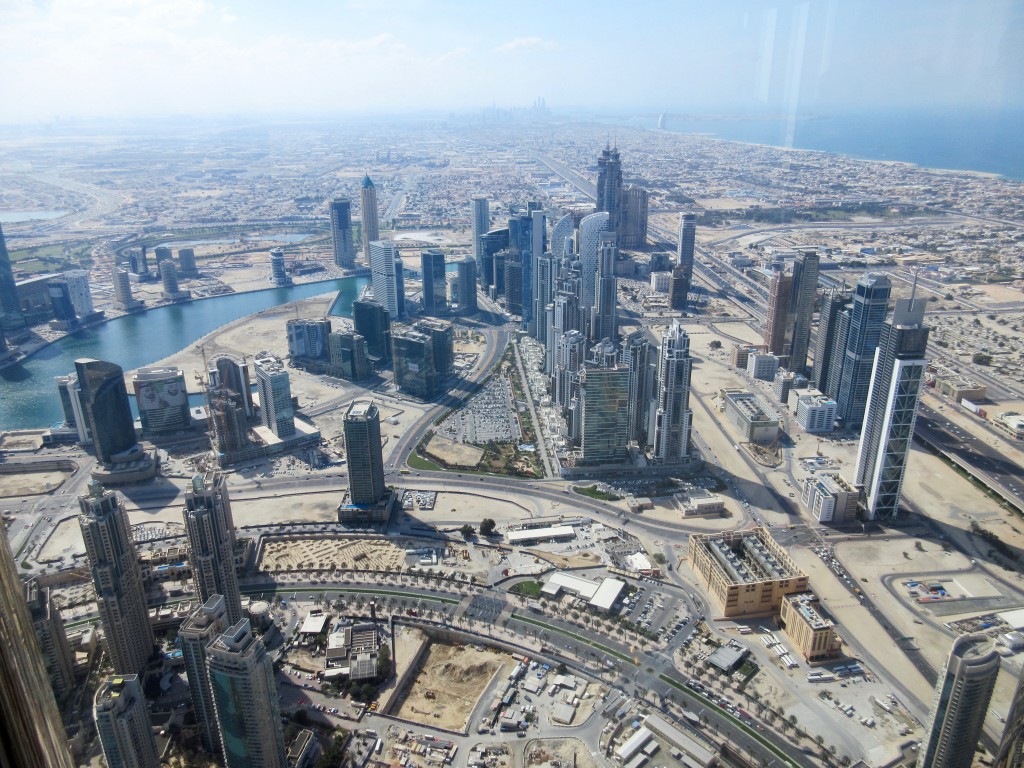 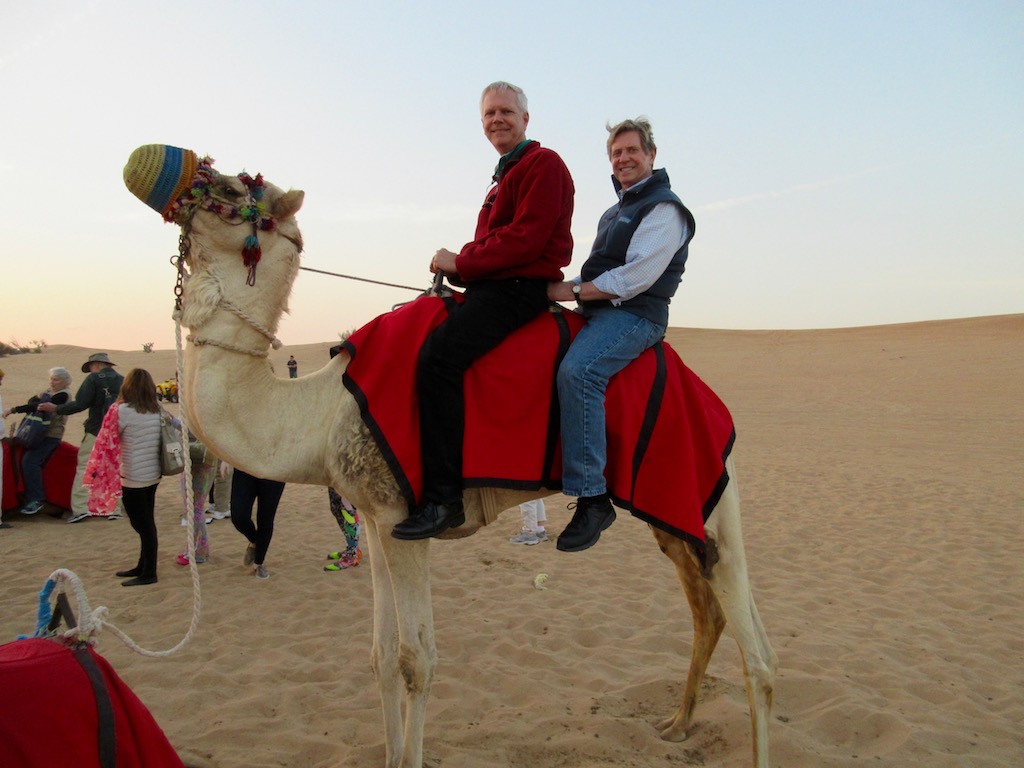 Dubai is located on the southeast coast of the Persian Gulf and is the most populous city (2.4 million) in the United Arab Emirates. It is one of seven emirates, which make up the United Arab Emirates country. Dubai is the business hub of the Middle East. The economy once driven by limited oil reserves is driven today by tourism, aviation, real estate and financial services. Our guide told us that the UAE has about 8 million residents, of those 6 million are male, mostly foreign born. Dubai is called little India because more than half of the local population is of Indian descent.

We took a morning tour called “Dubai’s Architectural Marvels” that took us on an overview tour of the sprawling desert city of Dubai. In some ways Dubai reminds you of Las Vegas in that there are sections of the city that are stretches of high-rise towers of every shape and size in the middle of the low-rise homes in the midst of a desert. The skyline is absolutely jaw dropping by the sheer height of some of the skyscrapers. Many of the buildings are unique in shape, few are rectangular in shape and many have colored glass facades to make them shin in the sunlight.

Our first stop was at the famous Burj Al Arab hotel shaped like a sailboat and situated on a beautiful white sandy beach. They have some 220 all suite rooms from about $3,000 a night. Breakfast is not included but can be arranged for a nominal fee of about $70 a person per day. You have the choice of transportation from the airport to the hotel; you can be picked up by helicopter or Rolls Royce for an additional fee.

We then drove to the Palm Jumerah or Palm Island created from dredged sand from the ocean floor. The trunk of the palm tree has public access although the fronds are private and each have a security guard and gate for access. The trunk contains one condominium building after the next, as well as a shopping center and businesses. There is also an island ring around the palm tree islands that contains hotels. Here we stopped at the Atlantis Hotel, similar to the one in Nassau and built at a cost of $1.5-billion.

The next area we explored was the world’s largest artificial harbor called Dubai Marina. The once-desert area has been turned into a marina in a few short years and is now filled with high-rise towers of condominiums.

We drove by row after row of enormous single-family homes built by the government for the local people. If you are a local man and marry a local woman you are entitled to a government home for the rest of your life, all expenses paid. You have no mortgage, you pay no utility bills and they even give you cash to celebrate your wedding day. This is one way that they encourage locals to marry locals, rather than to marry someone from another country.

We then headed to the Mall of the Emirates where we took in the sights of Ski Dubai, the region’s only indoor ski dome offering fresh real snow all year round. This is very popular with the locals, since many have never seen real snow or been in any cold climate. Most come from a desert where the temperatures can reach more than 125 degrees in summer.

Our final stop was in the downtown district where we visited the largest shopping mall in the world as well as the tallest building in the world. The Burj Khalifa tower is 2,716 feet tall. We took a high-speed elevator on a 60 second ride to the 124th floor where you have a spectacular panoramic view over Dubai and the surrounding desert. They say that if weighed, the total amount of concrete used in the construction of the Burj Khalifa would equal the approximate weight of 100,000 elephants. The blowing sand particles in the desert can often obscure the view from the tower but today the views were quite spectacular.

After returning to the ship for a quick late lunch we headed out on another tour titled “Arabian Nights: An Evening Safari & Camel Ride.” We headed out in a caravan of 14 Land Rovers to the sand dunes about an hour out of town. Here we took a short ride through the sand dunes to a camel farm. They raise the camels mostly for racing and milk, but also for transportation, pets and eating. The farm had several baby camels that were very cute. We then headed to a desert campsite where we rode a camel for a photo opportunity. At the camp you also had the opportunity to do sand boarding, smoking a sheesha (Arabian water pipe), tasting dates, have a henna design on your hands or feet and having a photo with a falcon. The falcon is a very revered bird here and falconry is quite a sport. They had a whirling dervish and a belly dancer perform for us before and after a barbecue dinner. The barbecue included salad, hummus and pita, rice and curry, lamb, chicken and beef, dessert and Nescafe coffee (Truly Arabic).

After returning to the ship about 9:00pm we were treated to a traditional Lebanese dance troupe, a whirling dervish and a belly dancer. The whirling dervishes have elaborate costumes with large skirts that they manipulate in a variety of ways all while spinning in one spot for some ten minutes or more. The skirts even have battery operated colored lights that they can turn on and off. The belly dancer got the upper part of her body moving in one direction, while the hips moved in another…. quite an amazing movement!!

It was an exhausting day but we were happy to have the opportunity to see a bit of Dubai and experience the local culture.