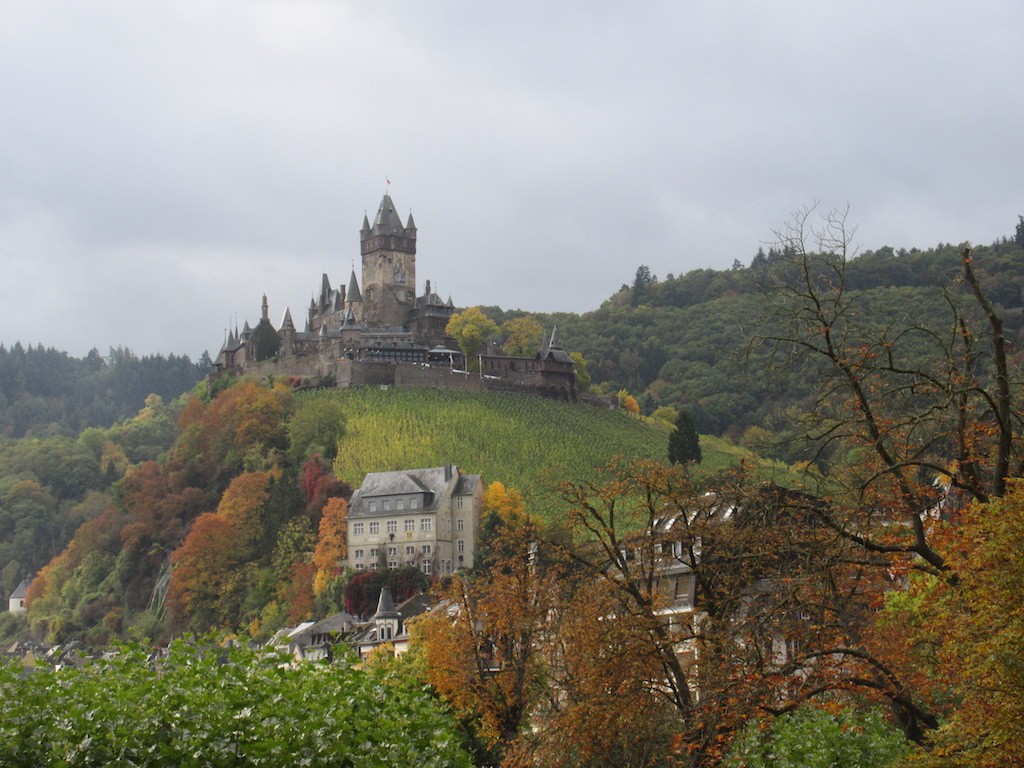 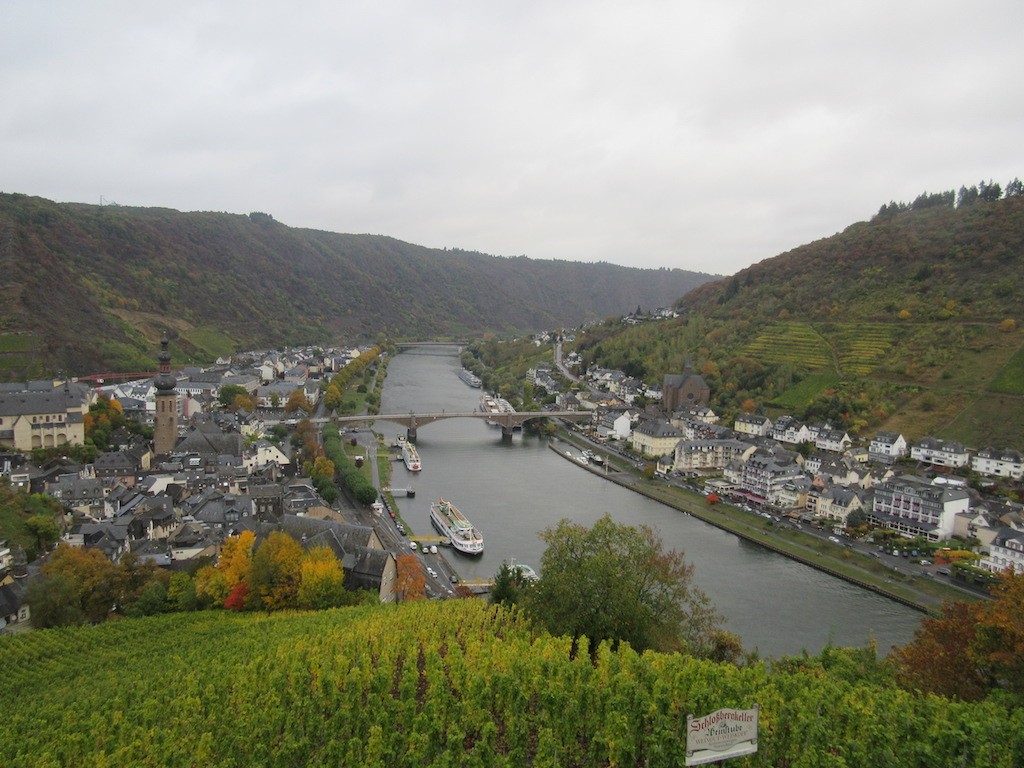 Cochem – View from the castle 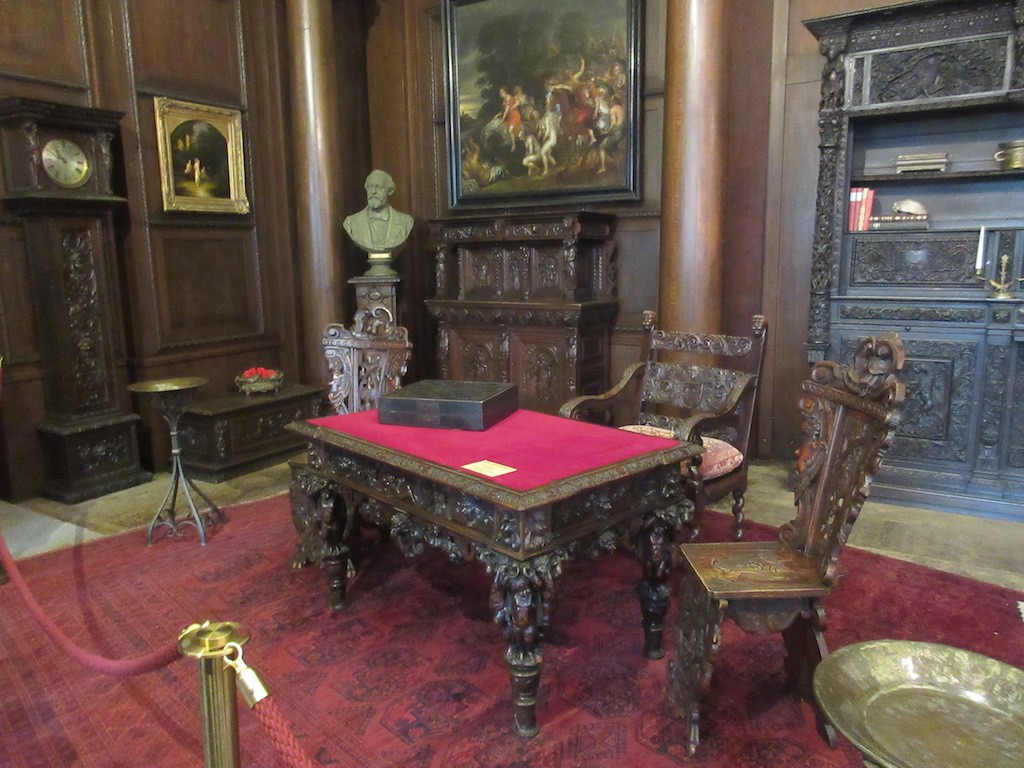 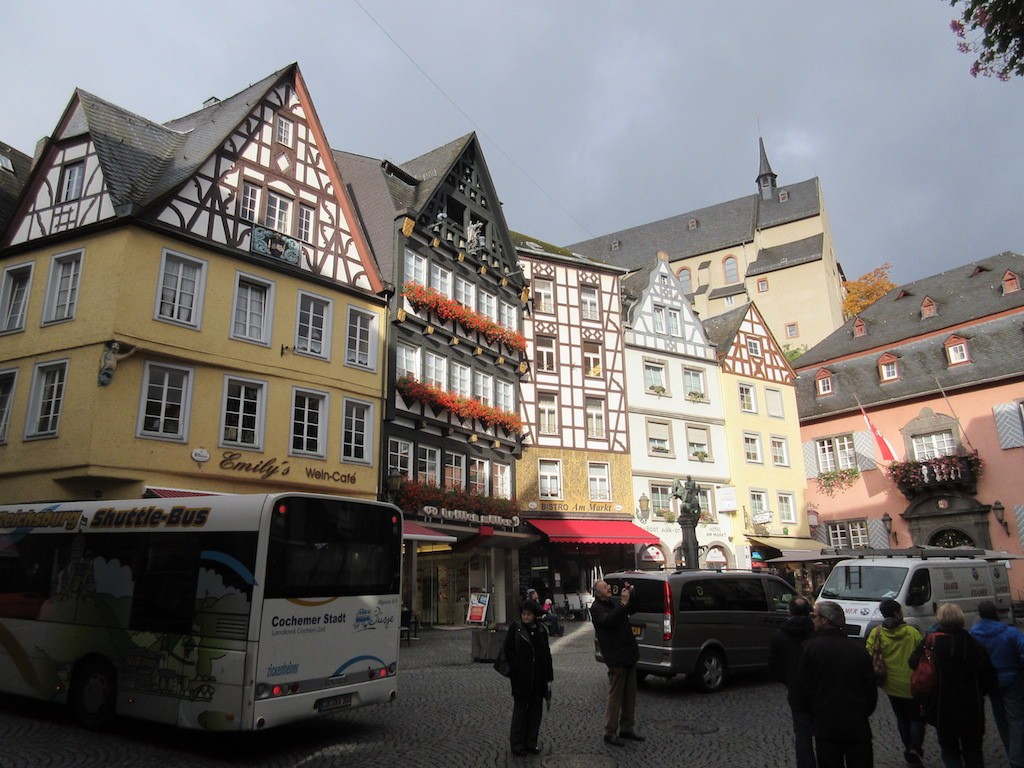 Cochem was believed to be settled in the year 886 and today is a town of only about 5,000 residents. We visited the Reichsburg Cochem Castle built around the year 1,000 by Count Ezzo. The castle was occupied by many rulers of the time until the year 1689 when King Louis XIV of France invaded the Rhine and the Moselle area and the castle was set on fire and blown up. The castle remained in ruins until a Berlin business man of French dissent named Louis Ravene bought the castle and the grounds in 1868 and began to rebuild the castle. The castle was rebuilt in the Neo-Gothic style that was popular at the time and used as a family summer residence. Today the castle is still furnished with Renaissance and Baroque furniture collected by the Ravene family. Since 1978 the castle has been owned by the local town of Cochem.

You have panoramic views over the Moselle River from the castle as well as the surrounding vineyards and the entire town of Cochem. The castle tour took us through the main public rooms that are elaborately furnished in an eclectic variety of furnishings from many periods of time and regions of the world. There are taxidermy animals, Asian carpets and vases, elaborately hand carved furniture, stained glass windows and so much more.

After our tour of the castle we walked back to the ship through the charming village streets. The narrow winding lanes are filled with small shops, restaurants and bakeries full of delicious looking cakes, oversized cream puffs and Black Forest Cakes. Many of the buildings date back hundreds of years and feature unique architecture and ornamentation.

We set sail at 12:45pm for our next port of call. At 3:00pm Monika, our wine expert onboard, provided us with information about the local Reisling wines complete with a wine tasting.

The food onboard has been good but not exceptional. For breakfast they offer an omelet station plus a full buffet. The buffet always has fresh fruit, cereals, oatmeal, bacon, eggs, toast and a couple of unique items like French toast or stuffed crepes. At lunch they serve a choice of a hot or cold soup, a choice of two hot entrees and a sandwich option, plus an option of two desserts. For dinner there is usually a soup, an appetizer, a choice of three entrees and a choice of dessert. Red and white wine flows freely at dinner.

The desserts are often not as sweet as we would prefer and they often sound better than they taste. For lunch today they offered what they called lemon pie. Their version of lemon pie was a thin slice of white cake on the bottom with a lemon flavored whip cream filling and little sugar and covered with raspberry sauce.

The weather was rather cool today requiring a fleece and heavy jacket to go out in the elements. The morning was dry but by afternoon we had some light sprinkles and grey skies.

The afternoon cruising included miles of quaint charming towns and villages, several locks and endless rows of vineyards. Rising up from the waters edge are row after row of grapevines, often planted in vertical rows. The hillsides are often steep but they continue to plant the grapes as high as humanly possible. Maintaining these vines must be extremely difficult not to mention the difficulty they must have with harvesting the fruit.

After dinner they showed the movie Patton in preparation of our visit to Luxembourg the next day where General George S. Patton is buried.