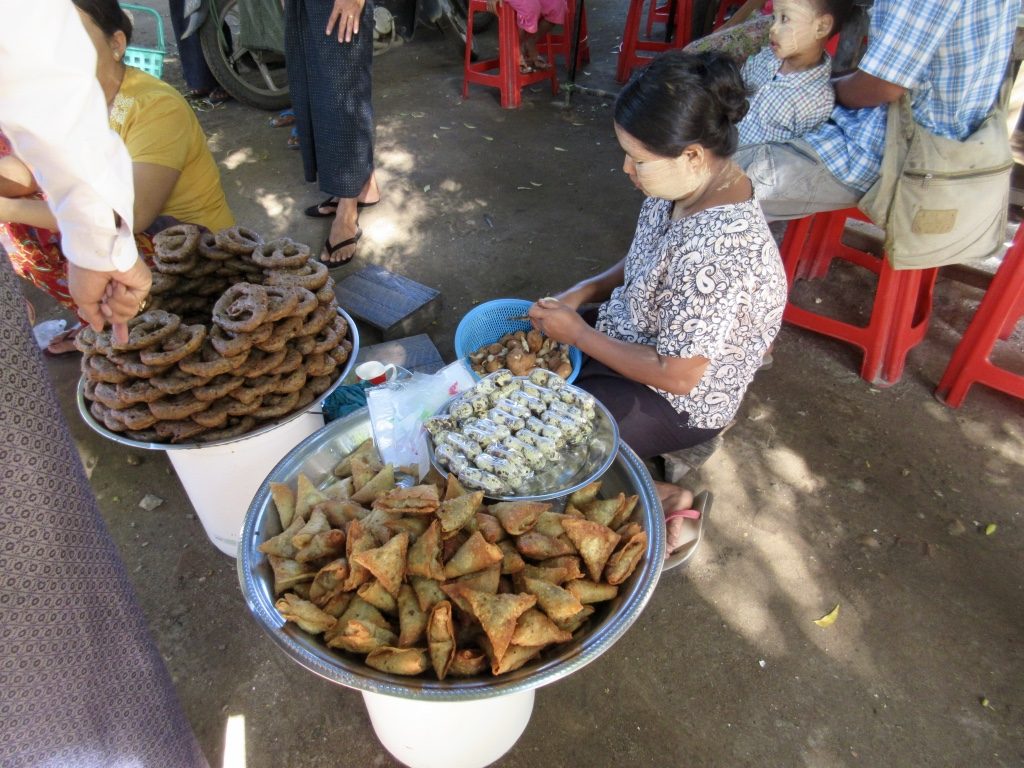 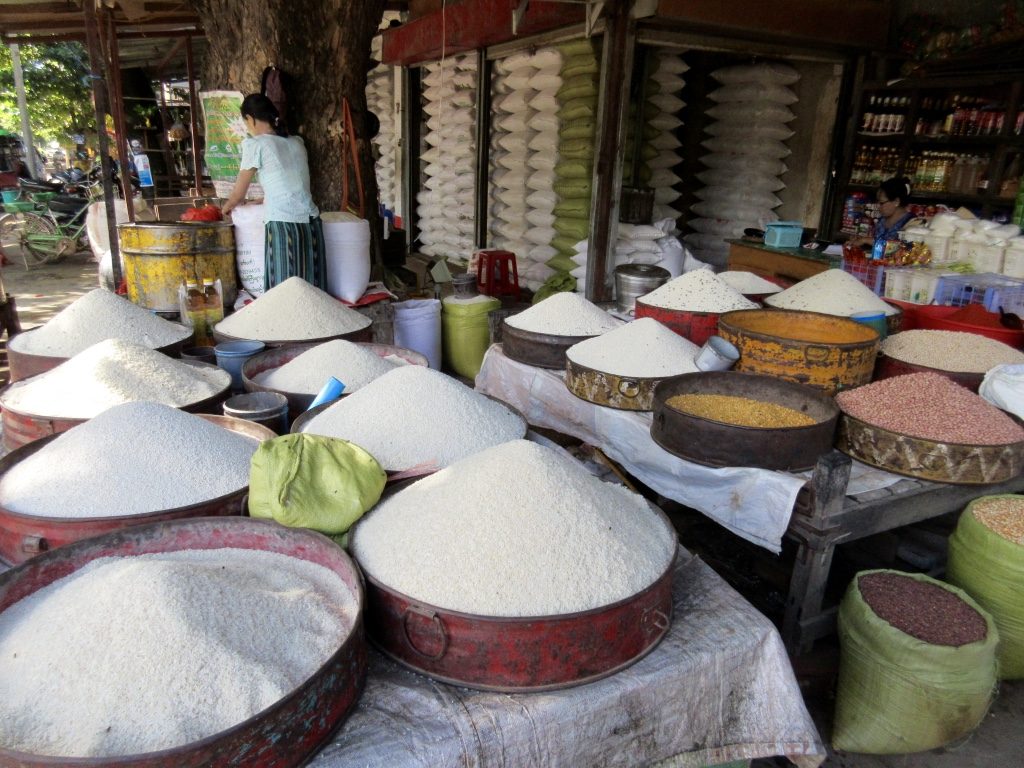 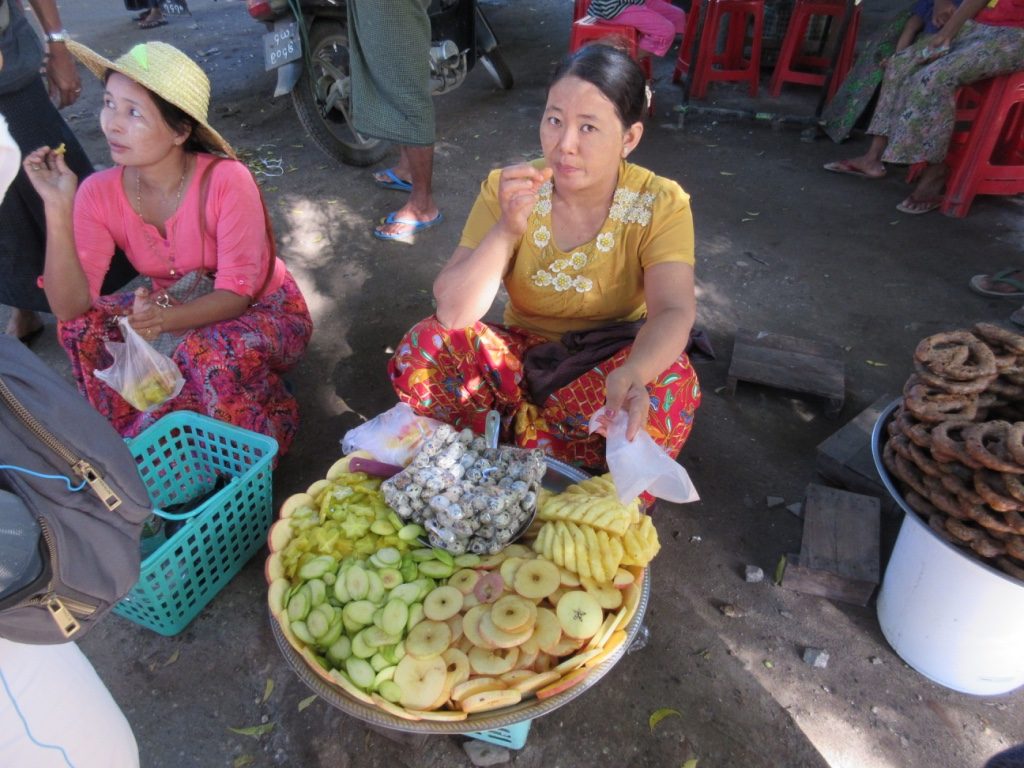 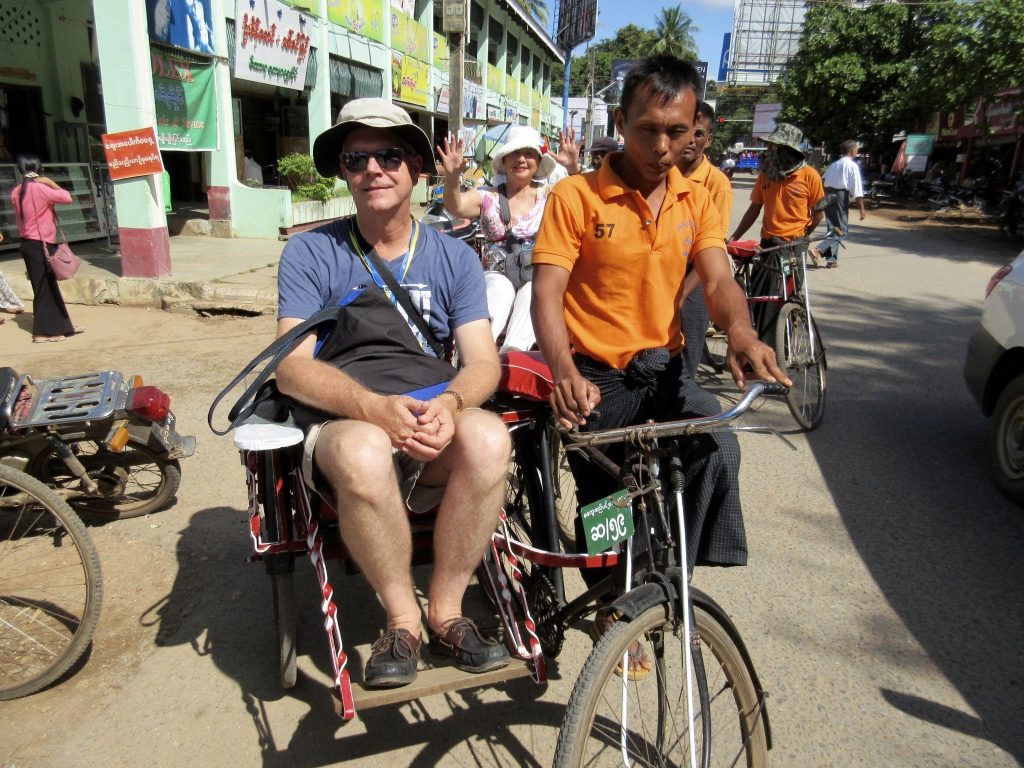 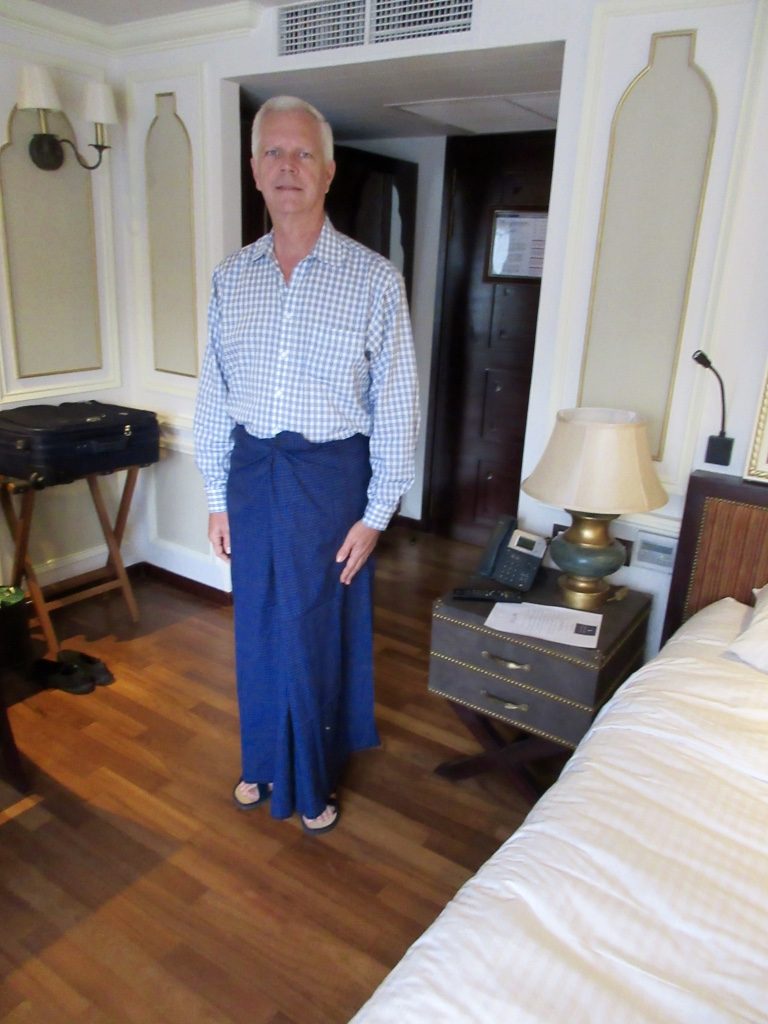 Magwe, a town of about 300,000 is known for growing sesame on something like one million acres of land. In addition to sesame they grow millet, maize, sunflower, beans tobacco, chili, onion, potato and tobacco and peanuts.

We took a walking tour from the ship through some of the local streets where they were selling produce, rice and local goods. We then stopped at the local market that sells all types of fruits, vegetables, clothing, jewelry, meats and more. This market was more organized than yesterday’s market and the stalls were more defined and spread out a bit more allowing you room to walk down the aisles with more ease. Mark purchased a blue plaid longyi for a party we had onboard the ship that night. The cost for the cylindrical strip of fabric in cotton was a whole 3,000 kyat or about $2.40.

We then took another mode of transportation. The trishaw is a three wheeled bicycle where one person sits alongside the driver in a side car. We took the trishaws on a tour of the city. We stopped at the central square and park and our trishaw drivers demonstrated the local ball game they play. They stand in a small circle and use a ball made of woven bamboo that is about six-inches in diameter. The object of the game is to use your feet, head or other body parts to keep the ball off the ground without using your hands. Every time you kick the ball in the air you score a point and the fancier the moves you use, the better score you can get. For every time you drop the ball a point is deducted from your team’s score.

We were taken on our trishaws to the Myat Lun Paya Pagoda where they were having a large annual festival. All around the area there was an enormous market set up with booths selling all types of goods from clothing to kids toys and baskets to all types of foods. The festival lasts about three weeks and then everyone will pack up their wares and head for home until next year.

After lunch we attended a cooking class where we learned to make two recipes’. The first was a recipe for a green tea salad and the second was for a ginger salad with fresh ginger. They said that most of the locals prefer their food very spicy with a large amount of red and jalapeno chili peppers used in their food. After the chef prepared the recipes for us they asked for volunteers to compete in a cooking competition to make the tea salad. Mark competed but the captain thought his salad had too much salt. Even though he did not win the competition he got another longyi in a green plaid color.

At tonight’s dinner we were encouraged to wear the longyi. Mark had two and decided to wear his favorite, the blue one. Kent declined as it made his hips look big! After figuring out how to tie or knot the longyi, Mark safely left the cabin with his longyi in perfect position. He wore a regular shirt along with the longi. Many other men and women also wore their local clothing. It was a festive group at drinks and dinner.

Before dinner the ship hosted a Burmese karaoke party in the lounge. The locals like karaoke and the crew sang a variety of songs for us. Some travelers also volunteered to sing karaoke.