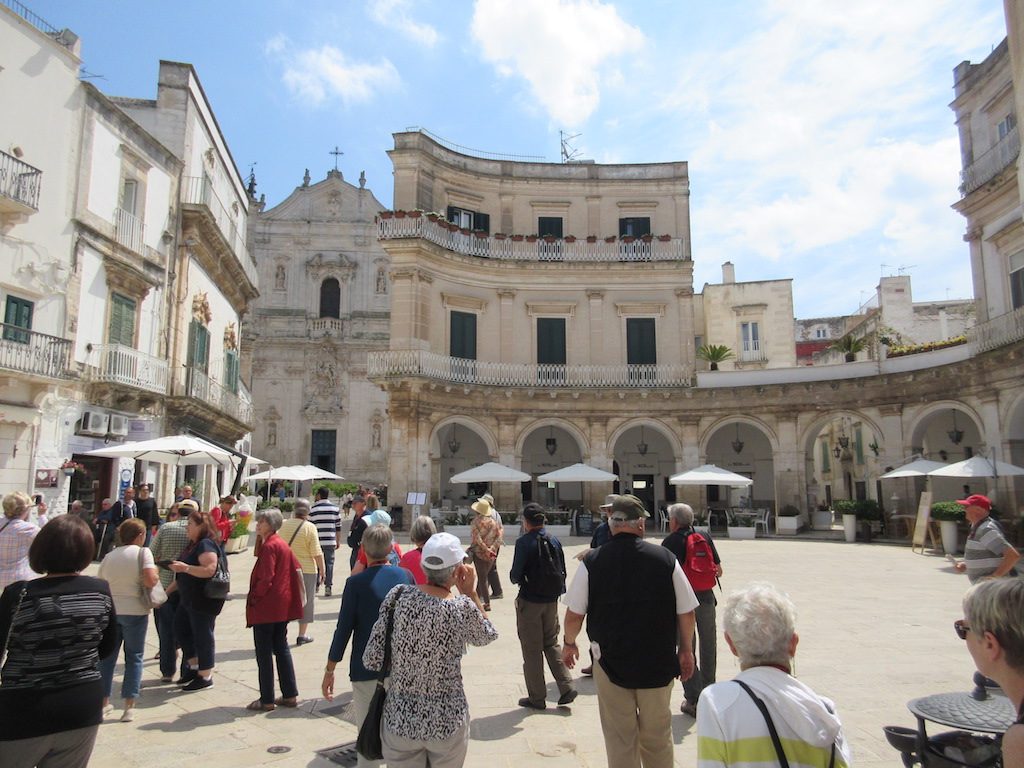 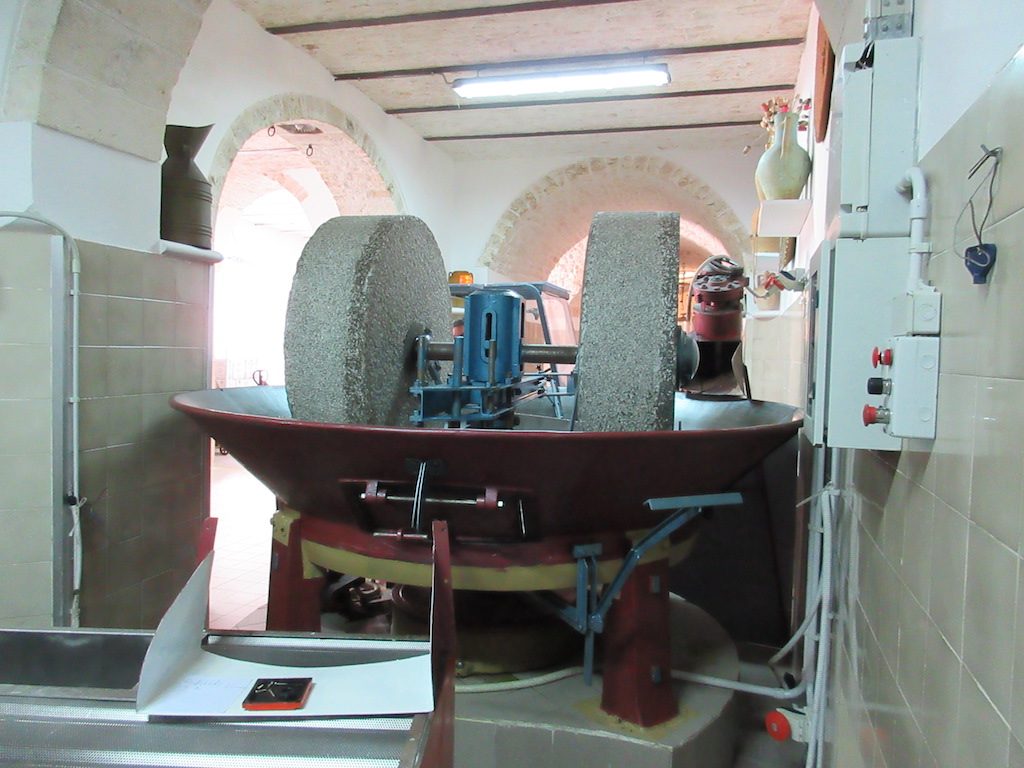 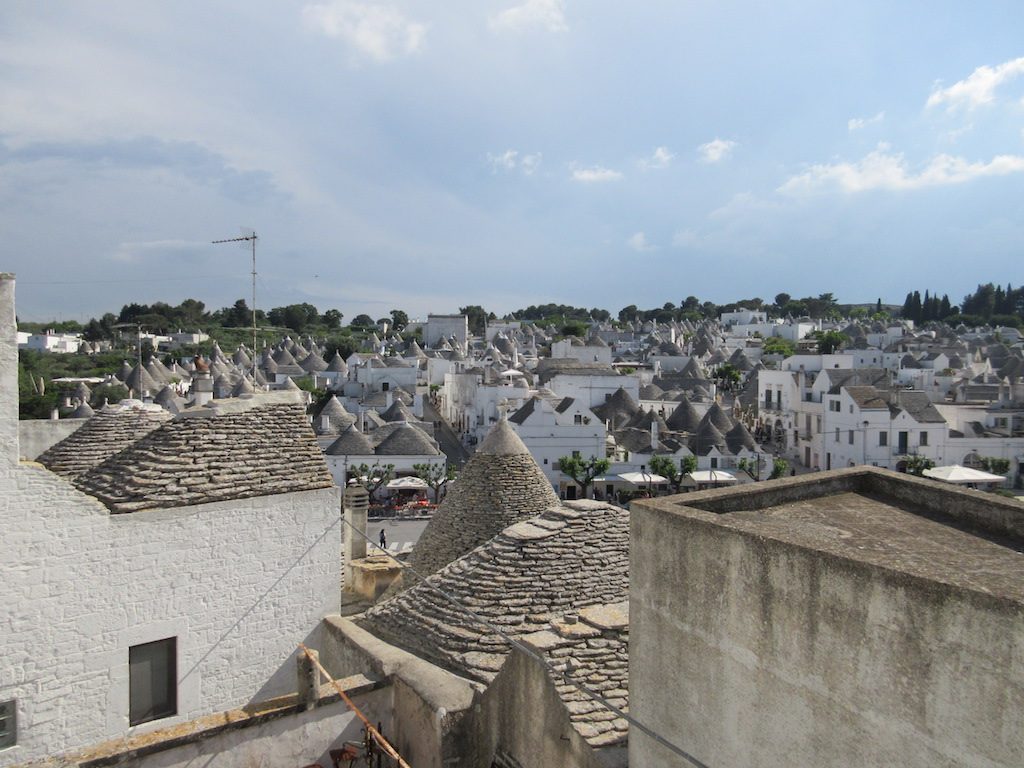 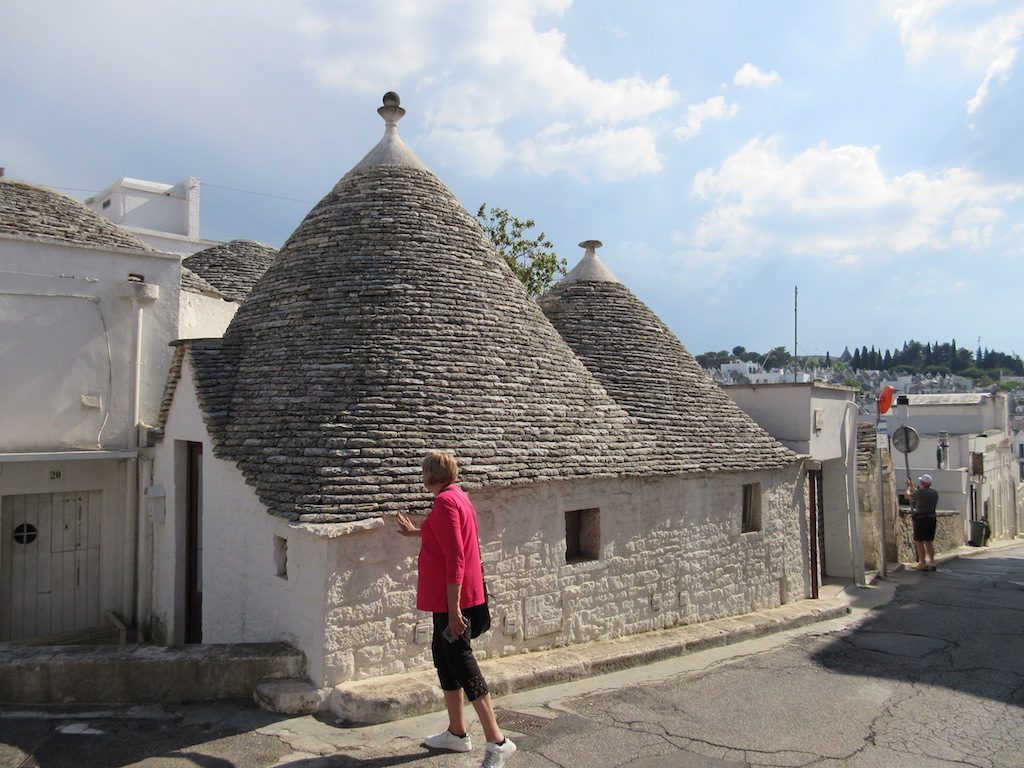 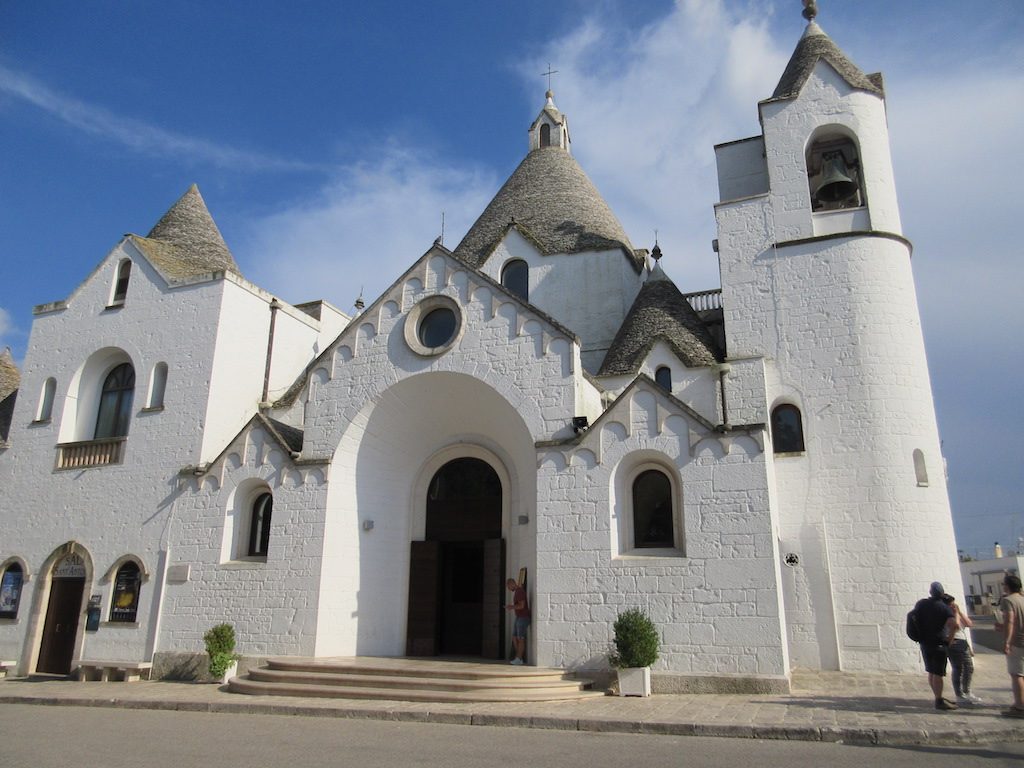 In the morning we drove to the town of 50,000 called Martina Franca where we had a tour of an olive oil company named L’Acropoli di Puglia that has been making olive oil since 1889. The owner gave us about an hour demonstration on the making of the olive oil and showed us how they grind the olives, filter the oil, etc. We then had a tasting of several types of olive oil similar to the way you might taste wine at a winery. We had clear plastic shot glasses with a small amount of oil to smell, swished gently in our mouths and then swallowed. Some of the oils had a very peppery taste while others were very smooth going down. They also stressed how important it is to not heat the oil olive but instead to use it at room temperature on pasta or salads just before serving.

After the oil olive tasting we took a walking tour with a guide into the small town of Martina Franca. She took us to a small museum where they had a variety of religious artifacts like chalices, paintings and vestments beautifully displayed. After the visit inside the museum we were taken downstairs to a café where we were served a variety of local products:  several types of cheeses, ham, salami, olives, tomatoes, wine and a local pastry for dessert.

In the afternoon we visited the town of Alberobello which was about a forty-minute drive from our hotel. The word Alberobello means beautiful tree and is a small town in southern Italy with about 11,000 inhabitants. The town dates back to the 16thcentury when 40 families were granted land to farm in the area. The area is full of stones which led the inhabitants to build houses out of dry stones without the use of mortar. These limestone circular-shaped houses with pinnacled, conical roofs are called Trulli. This concentration of about 400 local Trulli homes have been designated a UNESCO World Heritage site since 1996.

We had a walking tour of the most significant Trulli-style homes and were even able to visit the interior of one that has been owned by the same family for nearly a century. The elderly woman who was kind enough to open her home to us was born in the home and years ago, she was one of fifteen children living there. The home is quite small by today’s standards with a decent sized living and dining room, a bedroom alcove with small bath attached and a third room that functioned as a kitchen and additional sleeping area. Each of the rooms is made of stone walls and the conical shaped roof rises above each room. In this family many of the children had a loft in the cone shaped room over the main living space where they slept.

We visited a Trulli-style church with a beautiful simple altar and walked the many streets of the UNESCO site where many of the old homes have been converted to shops and restaurants. All of the buildings in the area are required to be white washed and no color is permitted as was traditional. At the peak of some of the roofs they would add an ornament of some type to reflect their religious beliefs in most cases.  Some owners would also mark/whitewash their roofs with symbols of their religious beliefs.

The streets were busy with tourists and locals alike who had come out to see a hot air balloon being launched from the main town square. We stopped at a small shop where they sold several types of sausage sandwiches on rolls for a bite to eat. Our next stop was a charming gelato shop along the main street where we enjoyed a refreshing and delicious gelato. Others chose to go to dinner at a local farm with folkloric show but we retired early as Mark was catching a cold and wanted to rest.