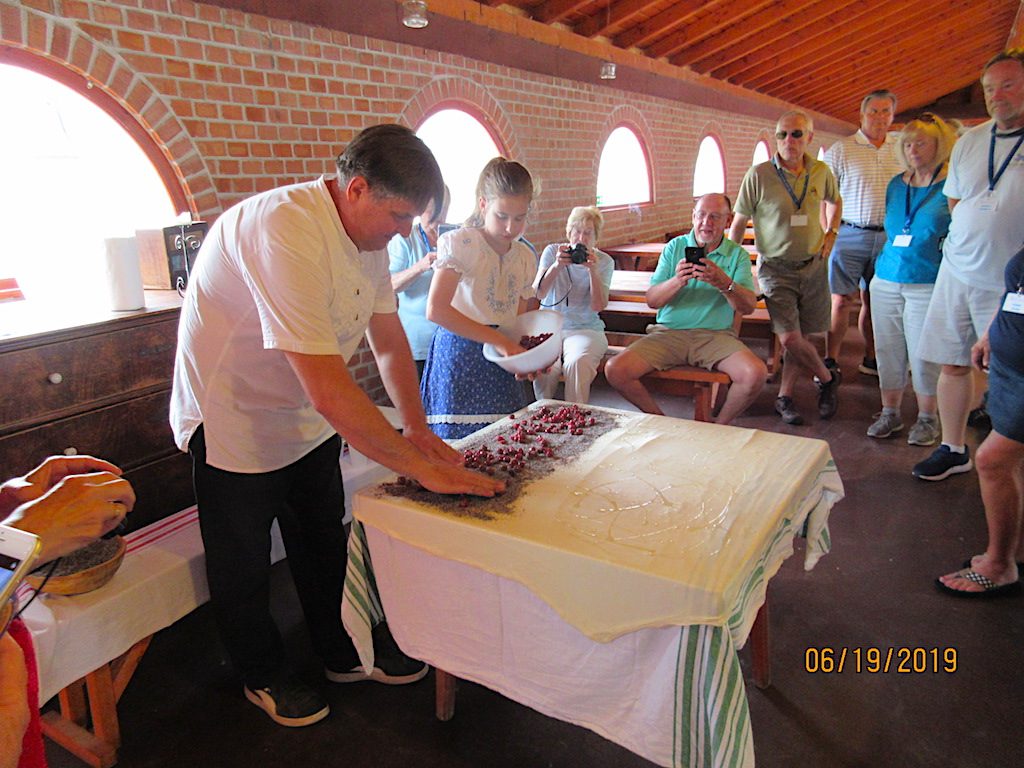 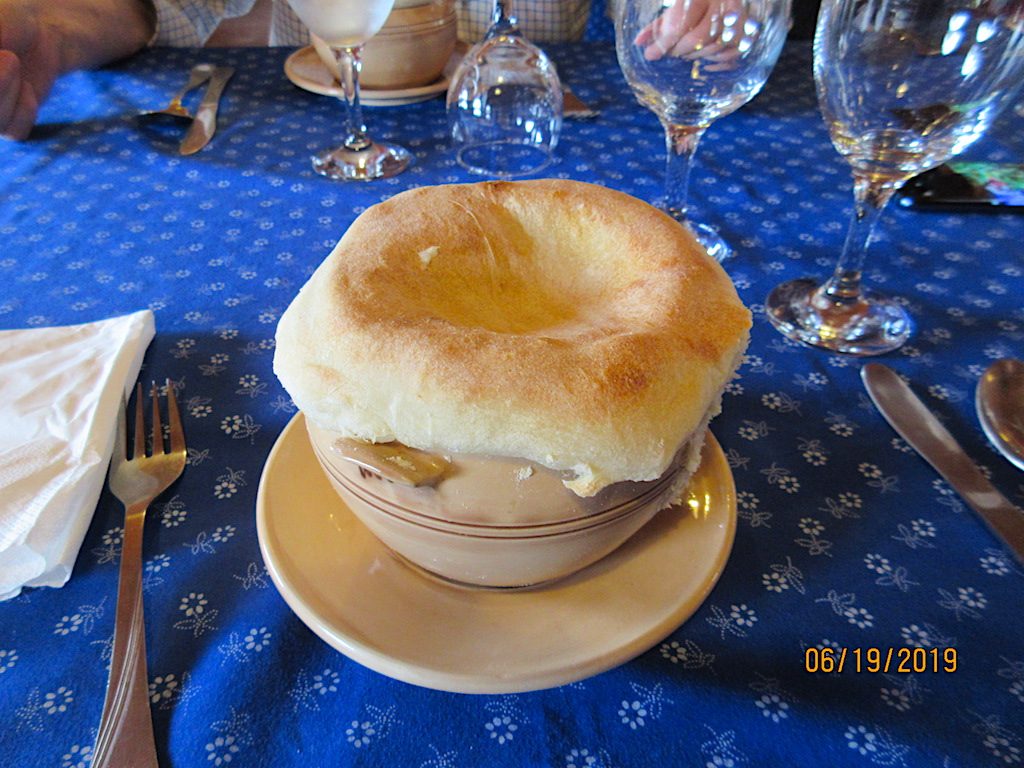 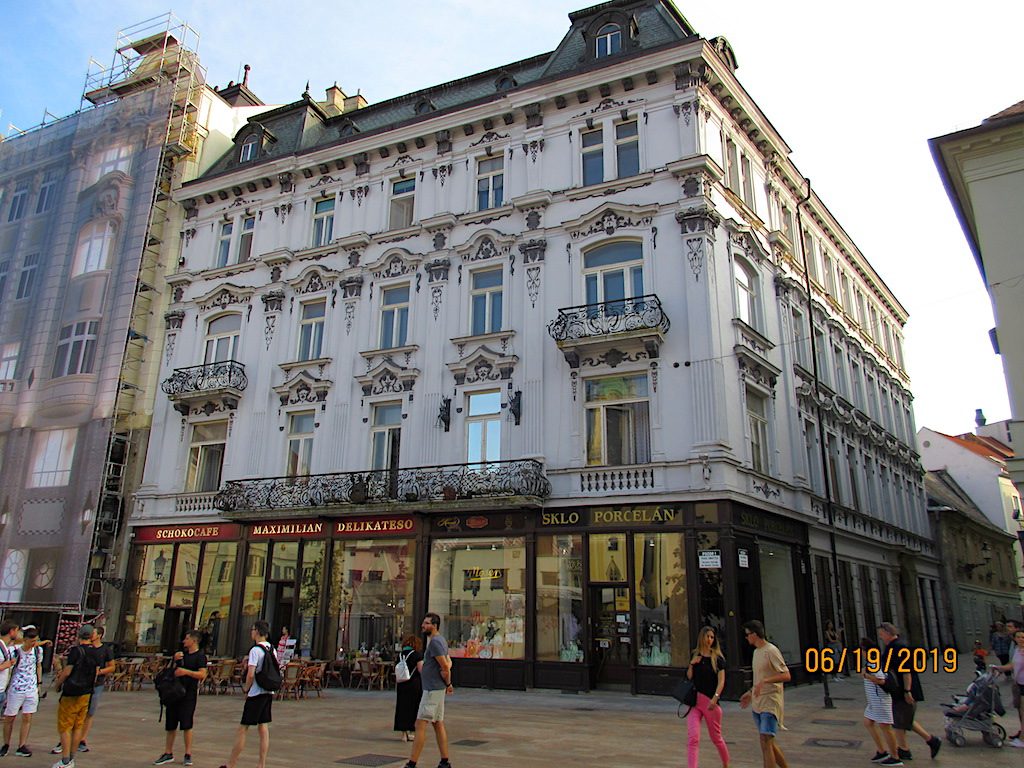 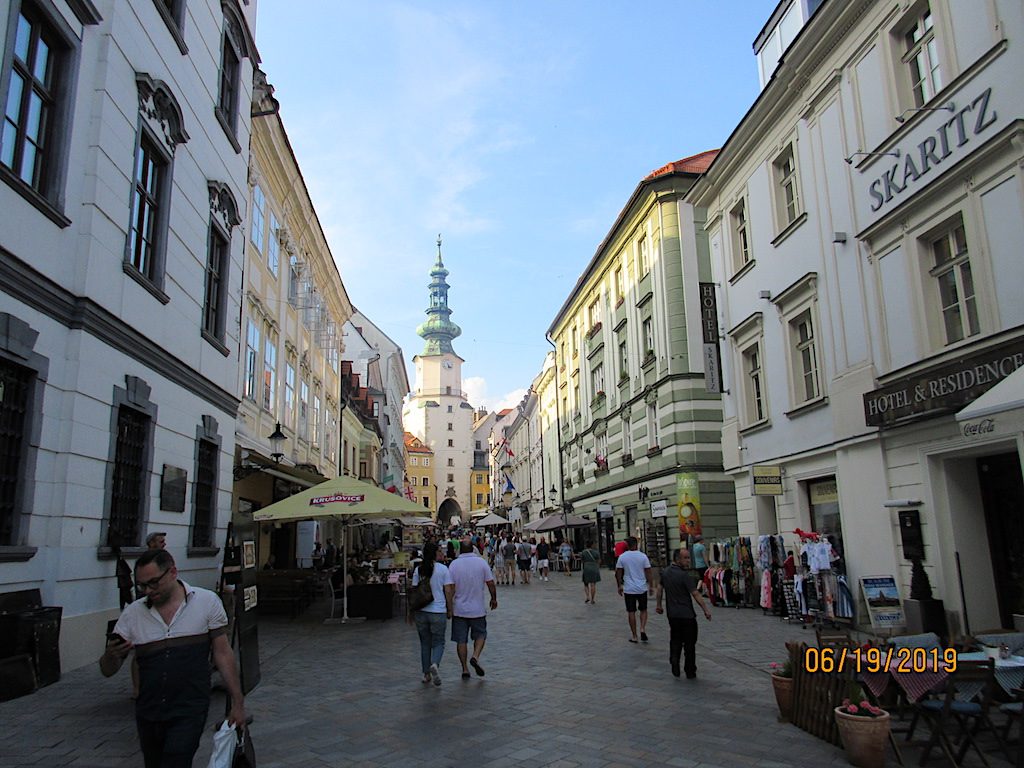 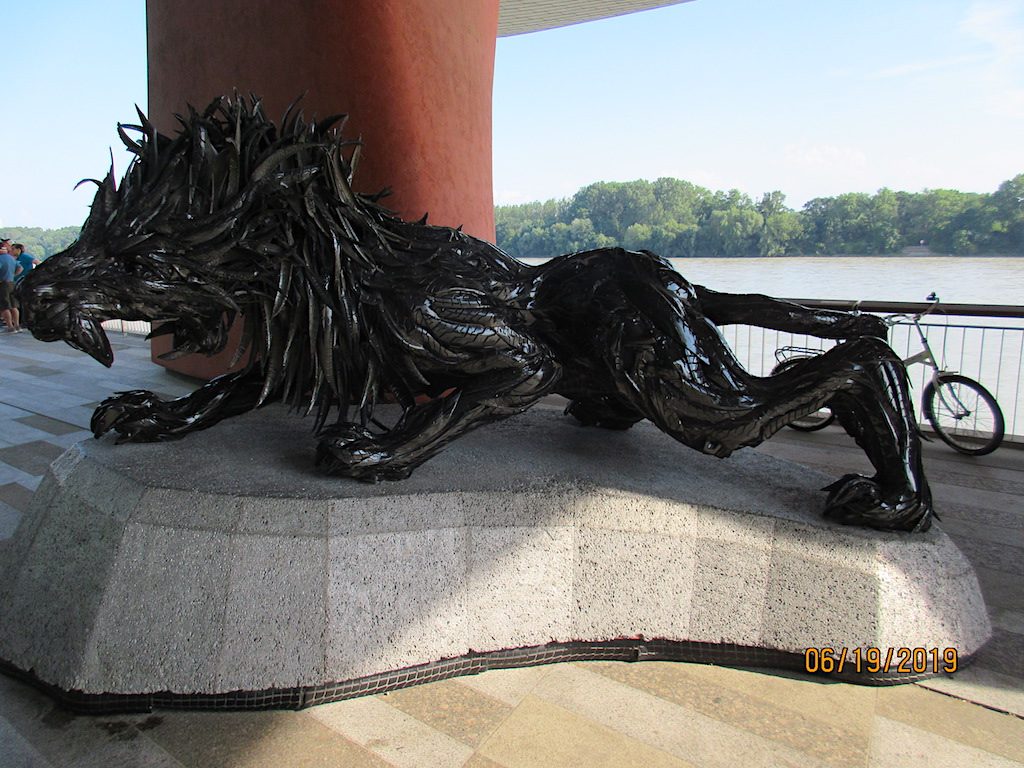 Bratislava staute of a lion made from old tires.

Our friends Ric and Kevin headed home this morning on a very early flight from Budapest to Frankfurt and then on to San Diego. They were on what was affectionately called the pajama shuttle as they had to leave for the airport at 3:00am.

We disembarked our ship at 9:30am for our transfer to Bratislava, Slovakia, by bus. Since there were 55 of us going on the extension we had two large coaches to transport us the 3.5-hour journey. Along the way we stopped in the town of Dunaalmas for lunch at a local family’s ranch. The family hosts all types of events at a ranch where they have horses, a garden and several covered dining and event spaces. We were greeted with a shot of the local welcome drink, a clear liquid in a shot glass that tasted like pure alcohol and went down with a little burning. Next, we helped to make bread that was cooked in a pizza oven over coals. The next task at hand was to help make the cherry strudel for dessert. We assisted with the making of the dough which we stretched very thin over a table before drizzling with oil, a sugar and poppy seed mixture before adding the cherries. The next step involved rolling the strudel pastry up with all of the filling inside before baking in the oven.

For lunch they served us a local goulash served in a small round dish about 5” in diameter and covered with bread similar to how you might think of a French Onion soup. The goulash was a thin broth with small pieces of carrots, potatoes and beef. After the soup they brought us three types of strudel: a cheese strudel, an apple strudel and finally the cherry and poppy seed strudel that we had helped make. All in all, it was an enjoyable experience with a local Hungarian family.

Crossing the border into the country of Slovakia was easy as both countries belong to the European Union. We simply drove across the border without even stopping.

Our hotel in Bratislava for two nights was the Grand Hotel River Park located downtown on the banks of the Danube. Our room is quite large in comparison to the cabin we had on the river boat. The room is beautifully furnished and very comfortable for our two-night stay.

After settling into our hotel and attending a brief orientation from our Vantage guide, we took a walk about twenty minutes down the riverfront walk into the old town and had a look around. The town was very busy with a live performance on one stage and a fashion show being set up for another stage and runway. There were many small tents and sheds set up in the squares selling souvenirs and food items. Many of the meandering cobblestone streets are pedestrian only and filled with shops and restaurants of all kinds. The town was very busy with tourists and locals alike all interacting in the same spaces.

Back at our hotel we had a light bite to eat in the lobby bar where we had a Caesar salad with chicken and a cheese and salami plate with fresh breads. Very sufficient and accompanied by a pianist who played a variety of American tunes from memory.

Slovakia: Geography & Quick Facts
Landlocked by Austria, Hungary, Poland, the Ukraine, and its former partner the Czech Republic, Slovakia is primarily a land of hills and mountains. The Danube River, which forms the country’s borders with Austria and Hungary, is straddled by the capital city of Bratislava. Farther north, the Carpathian range stretches to Poland. Among the Carpathians, the High Tatras Mountains are a desirable ski destination for Europeans, and the nearby countryside is popular with Slovaks for its scenic valleys and dozens of lakes.
Area: 18, 859 square miles
Population: 5,379,455
Languages: Hungarian, Ruthenian, Romany, and Ukrainian
Capital: Bratislava
Ethnic groups: Slovaks, Hungarians, Roma, Czechs, Ruthenians
Religions: Roman Catholic, Protestant, Greek Catholic

Slovakia History: Though the findings of prehistoric stone tools and a Neanderthal skull suggest that what is now Slovakia has been occupied for hundreds of thousands of years, the Slavs who gave the land its current roots did not arrive until the sixth century.

By the ninth century, Slovakia was just one more territory in the empire known as Great Moravia, which extended into Germany and included Poland and Hungary. In the tenth century, the king of Great Moravia beckoned Cyril and Methodius (future saints best known as the fathers of the Cyrillic alphabet) to help convert the Slovaks as part of his quest to craft a united Christian empire. The missionaries were successful, but the king was not, and by the dawn of the 11th century, his empire had fallen apart.

The Slovak people were governed under Hungarian authority for the next 1,000 years. When the Ottoman Empire swallowed much of Hungary in the 1500’s, Hungary made Bratislava, Slovakia, its capital, which remained until the 18th century. But instead of the city’s role elevating the Slovaks in Hungarian eyes, the opposite happened: the occupiers attempted to make both Bratislava and the entire region more like Hungary. This “Magyarization,” as it was called, had the effect of fomenting Slovak nationalism.

When World War I ended, taking with it the Austro-Hungarian Empire, the Slovaks and Czechs (whose culture had also been repressed) formed the unified state of Czechoslovakia in 1918. A mere 20 years later, with Germany moving in on Czech lands, Slovakia broke away to become its own nation. But it was something of a sham: Slovakia was a Nazi puppet state until the war’s end, despite an insurrection known as the Slovak National Uprising just before fighting ceased.
In the post-war years, Czechoslovakia was reunited, but heavily controlled by the Soviet Union. For 40 years, communist rule limited dissent and enforced cultural dogmas. Party leader Alexander Dubcek, a native Slovakian, tried to soften things, allowing greater social, political, and economic freedoms in a period known as the “Prague Spring.” But this so angered the Soviet Bloc that Warsaw Pact nations invaded in 1968, removing Dubcek and quashing any notions of Czechoslovakian self-determination.

As the Soviets learned, you can remove a leader but you cannot crush an idea, and the spirit of that 1968 spring nourished a dissident movement all through the 1970s and 1980s. In 1988, a peaceful protest, known as The Candle Demonstration, called for greater religious freedom; the police turned water cannons on the crowds and, when the protestors would not disperse, officers attacked them physically. These tactics revealed the communist government’s desperation, emboldening the dissidents further.

In 1989, with the entire Soviet bloc crumbling, the so-called Velvet Revolution broke the communist stranglehold, yielding a transitional government that included Slovak groups. Just over three years later, the Slovak parliament voted for independence in what has been nicknamed the “Velvet Divorce.” With this creation of Slovakia and the Czech Republic, Czechoslovakia was no more, and on New Year’s Day 1993, the new state was officially born.

At the dawn of the 21st century, Slovakia focused on proving itself a worthwhile candidate for membership in the EU and in NATO, both of which accepted the nation in 2004. With an emphasis on new foreign investment and improved social services for its citizenry, Slovakia approaches its second decade as a sovereign state with a sense of purpose—and with its first ever female Prime Minister at the helm. But its modern progress has not changed its historic character. As has always been true, roughly half the population still lives in tiny villages and hamlets of fewer of than 5,000. And alongside the Danube, beautiful Bratislava, with its centuries-old buildings and pedestrian-only Old Town, provides a timeless reminder of Slovakian glories past and present.